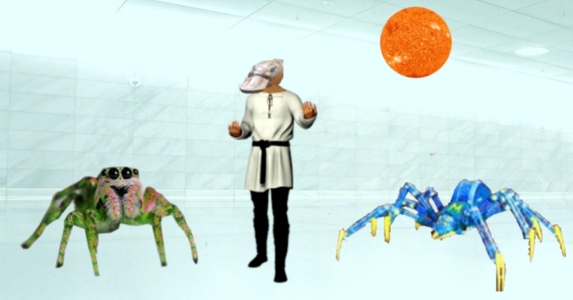 The Rulzarians, a monotreme species, reminded Armand of the long-extinct terrestrial platypus he’d seen only in photos. That is, except that these creatures walked on two legs and had hands of such dexterity as to make human pianists tear their hair out with envy.

But considering the intricate genomic makeover he needed, that was all to the good. There was just one problem.

“I’m afraid it’s impossible to make you humanoid,” said Yegholidaar, the geneticist assigned to Armand’s case. “The disparity is too great. The most we could do is give you a number of insectoid species to choose from.”

“Even if you could fly?” asked Gleanant. “Don’t all humanoids dream about that?”

“Not that kind of flying,” said Armand. “Seriously, that’s the best you can do?”

“Hmm … well,” said Yegholidaar. “We do have several humanoid genomes on file. Perhaps your android could help us select an appropriate option for cloning?”

“Got your complete medical records on file, Boss,” said M429.

“You’d transfer my consciousness into a clone?” asked Armand. “But then I’d be a biological robot.”

“Don’t worry,” said Gleanant. “None of your Earth friends would know the difference. Why, I bet Yegholidaar could even make some enhancements.”

“Indeed,” said the alien geneticist. “But what is this … Earth?”

“Never mind,” said Gleanant. “It won’t be inhabited for another million years.

Gleanant explained that the Ruzarian star had gone supernova centuries before humans walked on two legs. Despite that, she told Armand, no one had ever surpassed them in genetic engineering.

“More messing around with Time?” asked Armand. “OK, Yegholidaar, when can you start?”

“Why as soon as you give us the down payment,” said Yegholidaar. “Hmm, in your case, a hundred fifty thousand credits.”

“Where the moldy muon am I gonna get that?” asked Armand.

“Honestly,” said Gleanant, “your ignorance is astonishing. You’re a Dolnatrid now. They make the strongest silk thread in six galaxies. It supports more weight than titanium and it’s worth thousands of credits a meter.”

“Is this true, Yegholidaar?” asked Armand.

The monotreme clacked his duck-like bill.

“Oh definitely,” he said. “A hundred kilos of Dolnatrid silk would buy you two cloned bodies.”

During a brief conversation, the spidery android gave him a basic primer in “where Dolnatrid silk comes from.” For once, Armand was grateful he wasn’t human, so he couldn’t throw up.

“OK,” he said. “But I want some privacy. I’ll need a comfortable room and about three-hundred kilos of trelidra leaves.”

Armand turned back to Yegholidaar.

“Make sure my body’s first class,” he said. “After I’m done with this … project … I’m gonna need a complete makeover.”

A little over an hour later, Gleanant had completed her work and Armand entered a spacious dome, stacked high inside with baskets full of Dolnatrid trelidra leaves. Meanwhile, M429 consulted with Yegholidaar about Armand’s clone.

“You’ve got me worried,” it said. “Consciousness transference is a risky business. You could end up erasing my boss for good.”

“Risks dog every endeavor,” said the Rulzarian. “But as long as no one interferes, there should be no problem.”

With that, he hurried off to his lab. While M429’s logic circuits accepted Yegholidaar’s reassurances, his agile mind was still troubled. If Gleanant pulled a fast one….

“You forget, I’m telepathic,” said fiery alien AI from behind him.

M429 spun around to defend himself, but it was too late.

“Power down, M,” she said. “Nobody likes a smarty-pants robot.

Armand’s android tried to object, but it was all over. Its status lights went dark and it came to a dead halt.

“Time we moved things along,” whispered Gleanant. Once again, she deflected the flow of Time. But now it was aimed at M429, which crumbled into a pile of corroded metal and burnt out circuitry. Mere minutes later of subjective time, Armand emerged from his dome, exhausted.

Just then, Yegholidaar returned from his lab, wheeling a humanoid clone on a gurney.

“All ready,” he said. “And faster than I expected. But look, you have the silk ready, too. Well, then, let’s get your consciousness transferred, shall we?”

“Nothing to worry about,” said the monotreme. “I’ll attach these electrodes and….”

Before he could touch Armand, Gleanant swooped down and attached herself to the mental scanning device. A few moments later, a triumphant cry echoed out of the clone’s mouth.

Armand’s heart sank. Not only was he devastated at the thought of living the rest of his life as a sentient arachnid, and distressed by the loss of M429. But the thought of Gleanant roaming free in the universe was a terrifying thought.

He knew he had to find some way to stop her. But how?