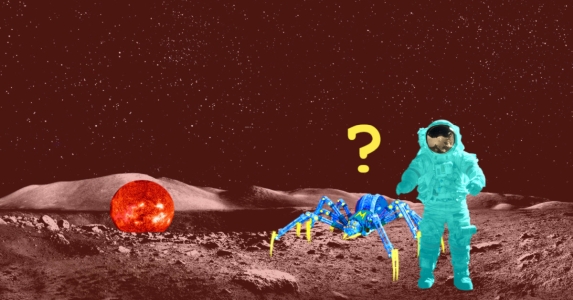 “Look at me,” Gleanant shouted in the male clone’s voice. “Nothing can stop me, now that I’m free of that horrible sphere.”

“Excuse me,” said Yegholidaar. “Stop you from what?”

“How?” asked the Ruzarian. “We didn’t encode any extraordinary abilities into your humanoid body. There’s only so much a phenotype like that can do without machines and electronics.”

Gleanant thrust out her new right arm and pointed at M429.

“Thanks,” it said, “but I’d better conserve energy. It’s getting close to charging time.”

“I’ll charge you, Worm,” Gleanant shrieked, and pointed again — to no effect.

The master geneticist waved his hands in the air.

“Absolutely not,” he said. “Organic minds are too fragile to transfer into a machine.”

“But I am a machine mind,” said Gleanant.

“Not anymore,” said Yegholidaar. “The only candidate for transference into that globe is M429. And who knows if their systems are compatible.”

“What do you think?” asked Armand.

“Don’t know as we have a choice, Boss,” said his android assistant.

“Hmm….” said Yegholidaar. “If you’re willing to risk it, we do have the technology. Bring me the sphere and we can begin at once.”

Armand, who’d been a Dolnatrid long enough to become familiar with his new body, leapt forward and bit the unsuspecting humanoid clone on the leg. As he’d hoped, venom flowed out of the fangs at the front of his mouth, and into his one-time “servant.”

“Lucky guess,” said Armand. who now took pleasure in watching the clone collapse to the ground - until a thought crossed his mind. “Didn’t kill her did I?” “No way, Boss,” said M429. “But let’s do this before she wakes up.”

Armand’s thorax tensed. If Yegholidaar succeeded, would M429 become as power-mad as Gleanant? The Ruzarian connected one end of his device to inputs on the sphere and the other end to M429’s ovoid brain case. After a series of comlink calls to his lab, the device was recalibrated and ready.

“Are you sure about this?” he asked.

Yegholidaar nodded and entered a few commands into his transference console. The sphere rocked to and fro on the ground and rose into the sky.

“Whoa,” said a hollow version of M429’s voice. “Hey Boss, you wanna be a little taller this time?”

“I know what that monster deserves,” said Armand. “Why don’t you….”

Suddenly, Armand’s mandibles clamped shut, and he lost consciousness. Hours later, he awoke from a deep sleep, after a bizarre web-spinning dream. Without thinking, he stood up on two legs for the first time in days. “I’m me again!” he shouted. “You even remembered some clothes.”

In full control of the sphere’s astonishing technological array, M429 whisked Armand off Rulzaria and back to the moon he was mining days before. In the nick of time, the spidery android loaded Armand back into his familiar pressure suit and set him down on the moon’s rocky surface. Armand gazed around.

“Dropped her off with the species that made her,” said the android. “Let them deal with her … attitude.”

“So now what?” asked Armand.

“Oh no,” said the human. “I’ve had enough wishes come true. Just change into your old self and let’s forget the whole thing. Are we where we started, in 3067?”

Armand’s jaw dropped as the bright red sphere fell into a small crater to his right and M429 appeared to his left. “Great to be back,” said M429.

“Too bad about you losing your unlimited power,” said Armand. “But I think it’s for the best.”

“Whatever you say, Boss,” said the android.

But, as anyone familiar with M-series androids would have known, its status lights were no longer blinking according to spec. Had the android really given up that power? Armand might never find out. Until, that is, the next time he found himself horribly transfigured by idle curiosity.