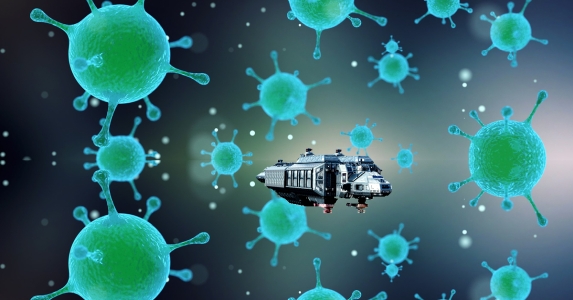 The news from the outer colonies wasn’t good. An accident in a pharmaceuticals lab on Delphi had released a flesh-eating pathogen against which there was no defense. Though one might think that the voids of space would be sufficient to isolate an infected planetary population, Reality had other ideas

The pathogen’s twenty-one day incubation period, combined with the lab’s thorough cover-up of the accident, set the stage for disaster. With no one the wiser, Delphi’s trade routes stayed open and, three weeks later, the five human colonies in the Cassandra sector had an unspeakable death toll. Soon after, the loss of revenue from nearly twenty-five billion consumers brought the galactic economy uncomfortably close to flat lining.

For almost the first time in human history, office-holders of all stripes skipped the usual grand-standing and finger-pointing. The Intragalactic Synod immediately approved emergency funding for robotic relief workers and a new class of research facilities.

The latter were to be housed in a suite of decommissioned hospital ships, and sent out to the Cassandra quadrant with all possible speed. Forty days later, the Capricorn, the first of these vessels, was folding space at top speed, on a trajectory toward the outer colonies.

“We’re moving too fast,” said Delany Morris, the Capricorn’s Chief Medical Officer, at an early staff meeting. “We reach Delphi in eighteen days and we still don’t understand this pathogen.”

“Good reason for that,” said her Deputy Chief, Montana Robinson.

In grim silence, everyone around Capricorn’s main conference room table nodded. The pathogen, whose scientific name was t. aurantiacus, had two attributes that made therapeutic intervention nearly impossible. First, its rate of mutation was astonishingly high.

A sample of the bacterium left in a petri dish for more than six hours would emerge utterly transformed. But the pathogen’s second attribute that was even more troubling. Every instance of t. aurantiacus was quantum entangled with every other instance. While that was hard to grasp in its own right, its broader implications were staggering.

Finally, two days out, one sliver of hope arrived from the drug company’s home office in the Ganna system. A report leaked by a concerned operative contained vital information about the pathogen’s origins. It appeared that t. aurantiacus had been developed with the aid of an abandoned piece of alien tech: a device uncovered two centuries earlier. during the colony’s excavation.

“They kept it secret,” Delaney told her team, “to ‘get an edge’ on the other colonies in the sector. Nice culture we have, no?” But though she was tempted to point out that Delphi’s cutthroat attitude had its roots in administrative penny-pinching, she forced herself to stay on topic.

“Guys,” she said, “people are falling like raindrops in monsoon season. I need a volunteer to visit Delphi and retrieve that alien artifact. We’ll never beat this thing unless we know how it was made.”

Dr. Walter Knussen, one of two hematologists assigned to the mission, slapped his forehead.

Delany stared at him.

“You don’t get out much, do you?” she asked. “The military knows nothing about this. But if they do get their hands on this piece of alien tech, you can forget about seeing it again. They’ll tuck it away in a secure facility until somebody figures out how to make a bomb or a star drive out of it.”

“Maybe,” said Knussen. “But I know from my time in the homeworld reserves that our infantry has solid expertise in retrieving toxic materials. I mean, I doubt the Delphians have left the alien device lying around.”

“You’re wrong,” said Delaney. “And here’s why.” She flicked the touch pad embedded in the conference table and called up a view screen — on which she displayed grisly footage of the scene at Delphi. “All dead. You won’t meet any opposition.”

“Well,” said Delaney, “you seem to believe that only someone with military training can handle this. So you must also think that you’re the best member of my team to go. Nobody else has ever been in uniform.

“Maybe not,” said Delaney, “but I just did. Pack yourself a day bag and report to the launch bay at 0900 tomorrow. You’ll need an Ares-class hazmat suit, a large triple-sealed sample jar and a strong stomach. Meeting adjourned.”

Knussen watched as the eleven other department heads filed out of the room. He’d been set up, but knew he couldn’t complain. He’d have done the same thing in Delaney’s shoes.

“Good thing I’ve had my shots,” he whispered through the tears rolling down his face.