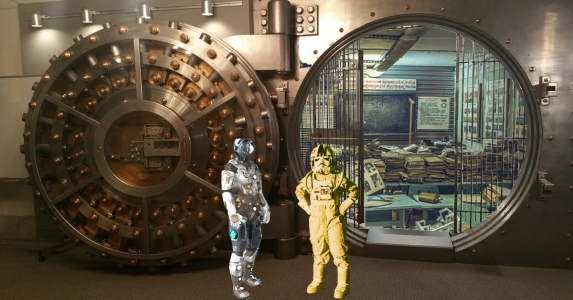 Chief Hematologist Walter Knussen arrived on Delphi with his heavy heart wrapped in a mustard-yellow Ares-class hazmat suit. The outbreak of t. aurantiacus was the worst medical calamity of his fifteen-year career and its grisly effects were on gut-wrenching display.

Years of training and experience in clinical objectivity went right out the window. His first stop on landing was to his temporary quarters in the Central Hospital, where he broke down into uncontrollable sobbing.

In time, however, he realized that the only meaningful response to grief was action. After a light meal, fed through his helmet from sealed pouches in his suit, Knussen set out for the hospital’s basement vault.

It was here, according to Delany Morris, the mission lead, that the alien device responsible for the deadly bacterium was stored. Accompanying him was a model 8theta/mu android, the one concession he’d managed to squeeze out of the government.

On such a high risk mission, he’d argued, he wanted to ensure he retrieved the correct object. Besides, the android’s sensors were tuned to monitor hazmat suit integrity, and Knussen knew he couldn’t afford more than a few seconds’ exposure to the air.

“Status normal,” said the android, as they approached the vault.

“Can you get this door open?” asked Knussen.

“Scans show it is not locked,” it said. “Demonstrating.”

Knussen stepped back as the android tugged gently on the two-meter-thick vault door and swung it open.

Knussen walked into the open vault and nodded. It was no surprise that the research team had reached for the alien device again when t. aurantiacus ran amok.

What did surprise him was the lone, bedraggled survivor of the hospital complex, who was slumped in the back of the vault, encased in a deep blue hazmat suit. Her croaking voice spoke volumes.

As it happened, the pathogen’s escape had a secondary effect.

“I need to retrieve the alien device,” said Knussen.

“Yeah,” said the woman. “Alters mind ģ makes smarter ģ but only ģ only for own ģagen ģ genda.”

“But we must find a way to combat this thing,” said Knussen. “The device might give us a clue.”

“What answer?” asked Knussen. His mind reeled. Was the sudden spike in his temperature, as measured by his suit’s senors, due to panic or the early effects of the pathogen?

“Positrons?” asked Knussen. “Is that it?”

But the emaciated face inside the deep blue hazmat suit went blank and she was gone. Knussen wanted to scream and rage, but feared he might damage his suit in that volatile atmosphere.

“She wasn’t of sound mind,” said Knussen. “And there’s no telling what she was warning me about. The device is the only clue we have to the bacterium’s origins. We’ll keep it in a stasis chamber until we figure out what’s next.”

“Warning,” said the 8theta/mu. “Available data insufficient to calculate probability that the bacterium can be so contained.”

“That’s an order, Eight!” Knussen shouted. “Sure, we don’t have all the answers, but we have to play with the cards on the table. You got that?”

“The analogy is logged and noted,” said the android. “The object you seek is the red sphere on the top shelf to your right. Suggest immediate teleportation to onboard stasis chamber in cargo bay.”

“Get on with it.” said Knussen. “before my own suit gives out.”

Within an hour, the exhausted human and his indefatigable android companion were hurtling back toward the Capricorn, which was a good five light years away from Delphi. Was the device secure in the stasis chamber?

If not, he dared not give into his desperate need for sleep. But by now the emotions that had flooded his heart from the moment he arrived on Delphi had taken their toll. He could no more resist sleep than he could completely ignore the tiny voice that echoed in the back of his mind.