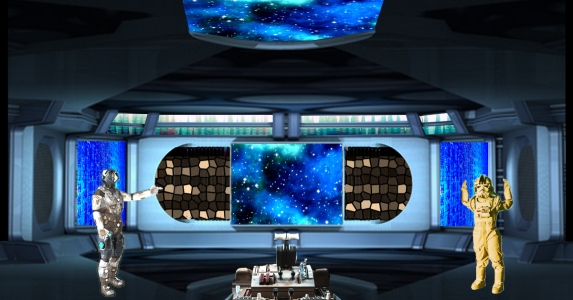 “Access Denied,” read the control panel for the second time. Why, Knussen wondered, couldn’t his probe ship dock with the Capricorn? Eyes shut tight, he called out to the model 8theta/mu android that was his only companion.

“Check system status, Eight,” he said. “Find out why the docking mechanism is down.”

“Correction,” said the impassive AI. “System failure not implicated. Data transfer from the Capricorn confirms that this ship is under lockdown until the epidemiological crisis has been resolved.”

As the android pointed out, the possibility that the virus might be transmitted through the comlink system could not be ruled out. Knussen nodded. Based on the report he’d sent enroute, Mission Control must have concluded that the bacterium could mutate into a digital form of itself.

What if Dr. Morris’ extreme safety measures were justified? If t. aurantiacus could translate its genetic sequence into digital sound patterns and transmit them into a new host through the ears, there’d be no stopping it. Once those patterns were decoded by the brain and resynthesized as bio-matter by the immune system, a new wave of communicable infection would begin.

On this matter, the 8theta/mu was of little use.

“Absent more data, I cannot rule out the remote possibility that such a translation process could occur,” it said. “Perhaps an analysis of the alien artifact might….”

“Easy for you to say,” said Knussen. “The medical worker on Delphi probably thought the same thing.”

As if on cue, the tiny voice at the back of his mind flared up again as it had just before he fell asleep the night before. Though indistinct, its influence was palpable. Its soothing sound lightened his mood and reinforced his belief in established scientific methods.

In similar cases, he realized, wasn’t it routine to carry out a preliminary investigation with robotic tools? Surely the 8theta/mu was immune to any biologic infection and could be shut down at the first sign of malfunction.

Unfortunately, Knussen’s investigation of the alien artifact was constrained by the resources of his probe ship. His only option was to have the artifact transferred to the probe ship’s modest medical bay. Though not as secure as a sealed laboratory on the homeworld, he could at least control the bay’s internal environment with pinpoint precision.

First, he ordered the 8theta/mu to clear the room of all supplies and any equipment that could be stored in the ship’s galley. In their place, the android wheeled in the Series 9 stasis chamber that housed the artifact and awaited further instructions.

“Ship’s AI,” said Knussen. “Lockdown the medical bay, cease life-support in that sector and pump out every molecule of air and particulates.”

Twenty minutes later the work was done, and Knussen comlinked his android companion in the medical bay.

“OK Eight,” he said. “Remove the device from stasis and run a complete analysis of all systems and structures.”

Though Knussen had been trained to weigh carefully all input he received from any android in his service, at that moment he was fresh out of patience.

The android stalled and its status lights blinked in an erratic pattern. After a full minute, it appeared to spring to life again.

“Back-up processors engaged, following crash of primary logic circuits,” it said. “Your request is several degrees out of alignment with protocol.”

Sweat broke out on Knussen’s forehead as, out of nowhere, he recalled a series of override codes that, for the life of him, he never remembered learning in medical school. Yet, strangely, the unfamiliar codes worked.

Through a monitor in the ship’s command center, Knussen watched as the android unsealed the stasis chamber, retrieved the alien device and opened an access panel in its humanoid chest.

“Eight,” he said. “What in the Crab freaking Nebula are you doing?”

But there was no turning back. A second later, Knussen had to accept the fact that an alien device of unknown origin was now firmly embedded in his 8theta/mu unit.

“That’s a negative!” Knussen shouted through the ship’s intercom. “Stay where you are.”

No use. The celebrated hematologist, whose medical training had prepared him for precisely nothing relevant to his situation, watched helplessly as the newly reconfigured android lumbered toward him in the command center.

“Doctor Knussen,” it said. “It’s time we had a friendly, but frank conversation about the future of your species.”