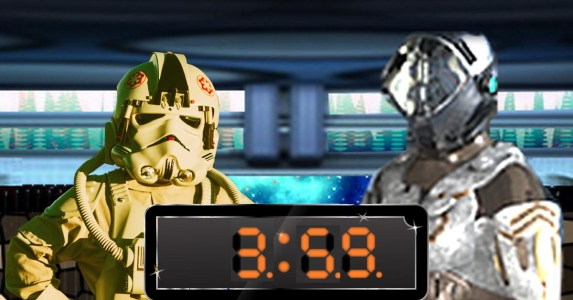 Trapped on a small probe ship with a self-serving alien intelligence that had taken over his 8theta/mu unit, his one link to the outside world, Dr. Walter Knussen clamped down hard on his fear.

It was time to think strategically. Trouble was, against a being powerful enough to decimate six colony worlds, his odds of developing a defensive posture on the spot were near zero. No matter how improbable it seemed, he decided that his only option was to go on the offensive.

His one hope, he knew, was to find a bargaining chip — something his adversary needed. Maybe if he could just keep the disagreeable thing talking, it would let something slip.

“The long term survival of my species?” he asked. “What the strange quark makes you think that’s up to you?”

The alien intelligence lodged in the 8theta/mu unit made its point of view disturbingly clear. The colonists on Delphi had sown their own fate by refusing to cooperate with its plan to regenerate its long-dormant species.

“All we asked for were a few volunteers for genome remapping and re-education,” it said. “But your people are so intolerant. Instead of cooperating, they assaulted us. Frankly, we don’t see what the fuss was about. Our species is obviously superior. Your colleagues should have jumped at the chance to be reborn.”

As a consequence, the intelligence explained, it had launched the deadly bacterium that had taken the lives of millions and threatened billions more across the settled universe.

“A matter of self-defense,” it said.

Knussen’s brow furrowed. If it were true that the intelligence had been attacked, the scale of its defensive maneuver was open to question. But against a being so maniacally inventive, there was little he could do but stall for time.

“If you need us to regenerate,” he said. “I fail to see how annihilating us furthers your aims.”

“Perhaps our response was a bit rash,” said the intelligence through the android’s language centers. “What do you propose?”

“To begin with,” said Knussen, “stop underestimating us. We have an advanced cloning practice that can generate all the necessary organic matter. You’d need only provide the genome and a phenotypical template. Or we might accomplish something similar with biomechanics.”

Knussen watched as the alien intelligence walked his android over to the command center’s single polyglass portal.

“To see the stars again, after ten thousand cycles of confinement in an a-dimensional e-mag bottle,” it said. “Desirable is hardly the word.”

“You would, however, have to meet my terms,” said Knussen.

Over the alien’s protests, Knussen assured the intelligence that the Capricorn had its weapons trained on his ship and was only too eager to vaporize it if he made an unauthorized move.

“Besides,” he explained, “I have only one request. Restore the colonists on Delphi and its local trading partners. Do that and I will have all the ammunition I need to convince my superiors.”

“Ridiculous,” said the intelligence. “You saw for yourself….” “Yes,” said Knussen, “I saw what you did to the Delphians. I also caught a glimpse of your mind when you insinuated yourself into my brainstem. I’m willing to bet the effects of the bacterium are reversible.”

The 8theta/mu unit turned back to face him.

“You … might be correct,” said the alien. “In any case, a certain number of your operatives proved resistant. Remarkable. We made sure to block them from your mind, but though gravely ill, they are still active. We could start with them. The rest are merely comatose, as you’d have seen if we’d allowed it.”

“Then you’ll comply,” said Knussen. “As soon as the population of Delphi and the other five colonies report in, I can make a proposal to my superiors. Until then, we’re both stuck here in quarantine.”

The android walked over to where Knussen was standing and leaned against the ship’s navigation console.

“Fine,” said the intelligence. “But know this. I have implanted a dormant strain of the bacterium into your system. At the first sign of deception, I will make it active. Do you understand?”

Knussen stared at the 8theta/mu unit a good thirty seconds, before he turned away, squeezed his eyes shut and whispered a complex alpha-numeric command string into the ship’s comlink system. A ship wide message rang out before he’d blinked twice.

“You were saying?” he asked.