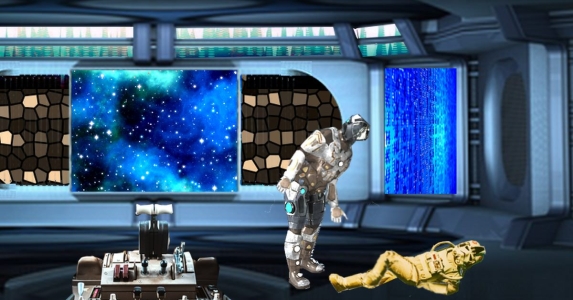 Unfortunately for Knussen, the coldest setting on his suit’s thermostat wasn’t enough to cool his fevered mind. With only a minute-and-a-half to go on the self-destruct counter, the alien embedded in the doctor’s 8theta/mu-class android hadn’t budged. Would the intruder finally crack the self-destruct code and switch the detonator off?

Knussen was in the ironic position of simultaneously hoping the alien could — and could not — shut off his probe ship’s self-destruct sequence. Though he told himself he’d rather die than be blackmailed with the threat of infection, his instinct for survival raised a hypothetical question:

“Would it be so bad to run a few errands for the alien and hope for the best?”

But the disciplined hematologist knew better. If the being inside his android wouldn’t remove the dormant, yet deadly bacterium from his body, he’d rather take his chances on a fiery explosion. As the control panel timer counted off the last thirty seconds, it looked as if his number were up.

“All right!” the alien intelligence cried out. “I’ll remove the microbes from your system. Your android has so far resisted me. I can’t retrieve the override code from its mind.”

Knussen didn’t bother to remark that the 8theta/mu unit never had that code in its database. He simply closed his eyes and whispered the code into his comlink. The countdown halted, then reset itself. The danger had passed.

Knussen saw one of a dozen outlets on his command console begin to flash red. He tugged at a black input jack attached to the torso of his hazmat suit, unspooled enough of it to reach the glowing outlet and plugged in. The bio-sensor array of his suit was now patched into the medical bay’s sophisticated analytical functions.

“Search for traces of the unidentified pathogen,” he said.

“NO TRACE OF ALIEN PATHOGEN,” said the ship’s AI. “THE PRESENCE OF ANTIBODIES TO THE PATHOGEN SUGGESTS….”

“Satisfied?” asked the alien intelligence. “May we proceed with our regeneration?”

“Then what?” asked Knussen. “You’ll need a world to populate, preferably several hundred thousand light years away from the closest occupied solar system.”

If the 8theta/mu unit had been capable of laughter, the alien intelligence would have issued a sinister cackle. Instead, it explained that his species would build a transportation system based on principles that rendered distance meaningless.

“We’d be close by, no matter what coordinates we inhabited,” it said.

“But you’d have no reason to drop in on primitives like us, right?” said Knussen. “Initially, we’d be too busy,” said the alien. “But humans have a sufficiently advanced manufacturing capability to accept piecework, which would speed the process. Our designs would be a revelation to you, so your gains would be two-fold.”

“I’m no economist,” he said. “But what would a species that just sprang to life use for currency?”

“We’d pay in precious commodities at first,” said the alien. “Your technology is still dependent on rare minerals, which we know where to find. You see, we once occupied thousands more cubic kilometers of space-time than your pathetic colonies.”

“That was then,” said Knussen. “Today, you occupy one android, which I can shut down with a simple command sequence. So lose the attitude. And by the way, if you had all that, how’d you ever end up so … tiny?”

The human’s spine stiffened and he fell to the floor of the command center, wracked with pain.

“Don’t push your luck,” said the alien intelligence. “Our collective mind still has a firm grip on you, even if you did manage to conceal your thoughts at a crucial moment.”

A second later, the pain was gone. Knussen felt his aching muscles relax, but still couldn’t bring himself to stand up.

“Point taken,” he whispered. “But what happened to you? And … do you have a name?”

“Long ago, our species was known as the Kleptani,” said the alien intelligence, “We were victims of a tragic misunderstanding.” Knussen pulled himself up to his feet.

“Misunderstandings are based on something,” he said. “What did you do?”

“We attempted to remap the genomes of several of our neighboring species,” said the Kleptani, “strictly for their own good. Their imperfections were polluting the life force in our region of space-time.”

“Humans, are imperfect, too.” said Knussen.

“I think you can assume we learned our lesson,” said the Kleptani.

“Impressive,” said the Kleptani. “You may have more potential than we realized.”