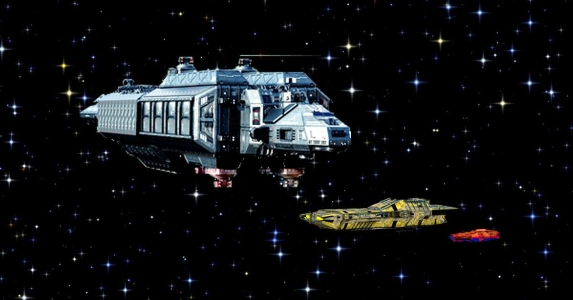 Knussen stared at the 8theta/mu unit and tried to imagine his next move. Though he was grateful to be free of the deadly alien virus that had devastated Earth’s colonies in the Cassandra sector, a greater danger lay ahead. If he kept his end of the bargain and used his influence to help regenerate the Kleptani, he’d be seeding the universe with a malevolent species bent on total domination.

“No wonder they were confined to that device for millennia,” he told himself.

From what he’d seen so far, whoever had imprisoned the Kleptani had plenty of justification. He could only assume that a set of ethical standards, like those adopted on Earth centuries before, had kept the Kleptani from being wiped out altogether. Trouble was, the fine moral dithering of the Kleptani’s jailers had become humanity’s life and death struggle.

“Nice work,” he thought, before remembering that the beings that had now taken up residence in his android had formidable telepathic abilities. In light of that, he tried to clear his mind of all thought and proceed on instinct. As a consequence, a plan he dared not acknowledge or analyze suddenly popped into his head.

“Bad news,” he told the alien intelligence. “The ship’s AI indicates extensive micro asteroid bombardment. I’ll have to take a shuttle craft out to inspect the hull.”

“Surely, your ship’s sensors can give you all the details,” said the Kleptani.

“Ordinarily, you’d be right,” said Knussen. “But it looks as if the bombardment has crippled this ship’s sensor array. It’s operating at thirty-five percent capacity.”

“Once we’re back on our feet, as it were,” said the alien intelligence, “you’ll learn superior engineering methods. Never mind, we’d enjoy the opportunity to examine your vessel up close.”

Knussen swallowed hard. If ever he needed to be a good salesman, it was now.

“Well … sorry,” he said, “but I’ll need the 8theta/mu unit to calibrate the shuttle craft’s cameras from here. We were in such a rush to get our hands on you that we didn’t get around to it before I left for Delphi. Of course, if you want to exit the android, I could carry you onto the shuttle myself.”

“So you can toss our container out of the air lock?” said the Kleptani. “Nice try! We’ll stay right here.”

It was all Knussen could do to keep from rolling his gray eyes all the way out of their sockets. Lucky for him, the upside of extreme arrogance is often intense gullibility.

“Right,” he said. “This shouldn’t take long. Meanwhile, think about what color drapes you want for your new colonial domes.”

He turned and ran as fast has his bulky, Ares-series hazmat suit would let him, to his ship’s tiny launch bay. Motion detectors flicked-on the bay’s lighting system, to reveal a compact shuttle craft, just large enough for a pilot and one crew member. Though his Fleet training had included the basics of aeronautics, he knew perfectly well he was no flying ace. Instead, he’d rely on the ship’s presets and a few basic voice commands he’d memorized a good fifteen years ago.

Once out in space, he instantly felt lighter, as if the Kleptani’s mental grip had been lessened by distance and the combined thicknesses of the two hulls that separated him from his adversary. Without delay, he flew the shuttle craft to a region of space just to the left of the probe shift’s rear thrusters. It was, he’d been told, the ship’s “blind spot,” where, for the sake of economy, Earth’s engineers had skimped on sensor coverage.

His head swimming, he nearly succumbed to a panic attack, until he found the control panel for the shuttle craft’s external lighting.

Meanwhile, on the bridge of Knussen’s base ship, the “Capricorn,” Ensign O’Hara made a startling discovery.

“Commander Abiola,” he called out. “The probe ship’s shuttle craft is parked outside its rear thrusters.”

“Commander, the shuttle’s external lights are flashing on and off in a pattern,” said O’Hara. “Hey, I recognize that. It’s Morse Code!”

“Come on,” she said, “how would Doctor Knussen know … Holy hull fractures! Ensign, this is serious.”

“You think he means it?” asked O’Hara.

“Why would anybody send a message like that if they didn’t?” said Abiola. “There’s just one problem. How the exploding neutron star do we know that’s really Knussen? Tell Doctor Morris to get up here, pronto.”