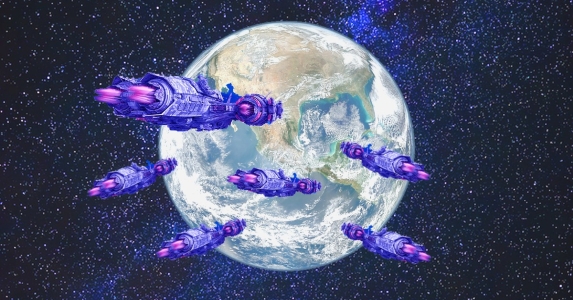 The voice that echoed across the bridge of the Capricorn belonged to Doctor Delaney Morris.

“He wants us to blast his probe ship to plasma,” said Commander Abiola.

“That might actually be Walter,” she said. “But if the alien intelligence had taken over his mind, how would we know?”

“That probe ship is a valuable military asset,” said Abiola. “Why would the alien want to destroy it?”

“Unless Walter’s on it,” said Delaney, “instead of the alien.”

“Commander,” said O’Hara, “why don’t we just ask for his serial number?”

“We’d need intel that’s not part of the official record,” she said.

“Craters,” said Knussen. “We’re running out of time. What does tipping the punch bowl on myself have to do with anything?”

“I got cranberry juice all over my dress uniform!” yelled Knussen. “Are we done laughing now?”

“You OK?” the Commander called out.

“Nearly fell out of my shorts,” said Knussen.

“Do you still sense the alien?” asked Delaney.

“What did it want?” asked Abiola.

Knussen took a deep breath and recounted the deal he’d struck with the Kleptani — along with his fears for humanity.

“You made the only decision you could,” said Delaney. “But I can’t authorize your return until we’re sure the Kleptani aren’t hiding … somewhere.”

“They obviously wanted to be found,” said Delaney.

On one of their earliest runs, they also delivered a gynoid “companion.” Knussen turned the unopened crate on its side and used it for a desk, on which to write his memoirs. But owing to his strict quarantine, it was doubtful anyone would read them.

Decades passed and, though human science advanced, no trace of the Kleptani was found.

“And yet,” said the eighty-five-year-old former physician, “you persist in this madness.”

Delaney Morris, who’d passed away in the meantime, was no longer available to hear his complaints. Commander Abiola, long retired, did check in from time to time. But she offered no hope.

“We can’t afford the risk,” she said. “Especially now.”

The change was the fleet of advanced-design alien ships that had just arrived.

“They say they want to establish a ‘friendship agreement,’ but nobody’s buying that,” said Abiola.

“We told that fool,” he said, “that we were ready to help you. Now it’s too late. This body is feeble and can’t contain us much longer.”

“You?” asked Abiola. “You are the Kleptani?

“We entered Knussen’s mind on his way to the launch bay,” said the Kleptani. “We’d seen the subterfuge in his mind and thought it would guarantee our freedom. Who knew your species’ stubborn stupidity was its greatest asset?”

“It won’t help us against the Voleurians,” said Abiola.

“Not so,” said the alien intelligence. “Out of boredom, we spent the last fifty cycles recording the basis of Kleptani science on Knussen’s ‘computer,’ while he thought he was writing his memoirs. We just transmitted the file to you over this comlink. You’ll find everything you need to defeat your enemy.”

“And why would you help us?” asked Abiola.

“For the delicious irony,” said the Kleptani. “Because we know your people will refuse to open the file, out of fear. Your stubbornness will be your doom — as it has doomed us.”

Five years later, the Voleurian conquest of humanity was nearly complete. On a remote island, on a remote Earth colony, Abiola watched as a sullen insectoid ransacked her computer.

“What’s this?” she asked Abiola through a staticky translation grid.

Abiola glanced at the long-unopened file she’d received from the Kleptani.

“Just my recipe collection,” she said.

“Liar!” shouted the insectoid. “This is over sixteen quintaflops of data!” In seconds, she’d uploaded the file into her ship’s AI for analysis and stormed out.

The next morning, all across the human worlds, news arrived of Voleurian ships exploding in orbit, as their planet-bound command centers going up in flames. And, it was said, the Voleurians themselves were in the grip of a severe epidemic.

On her way into her garden to see what plants she could save from yesterday’s Voleurian raid, a smile crossed Abiola’s lips, as she paused to gaze out over the horizon.