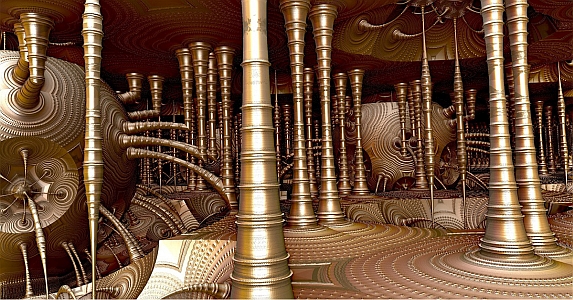 Marla pulled herself up to her full height.

“Stop right there,” she said. “Detaining EarthGov officers without cause is a violation of Interstellar Law.”

“And contradicting an imperial magistrate is a capital offense,” said the voice from the aircar.

“But that threshold was unmarked,” said Marla. “We had no idea….”

“No idea that a time portal is a time portal,” said the voice. “Ridiculous. Your interrogation will be quite ... thorough.”

With her hand parked on the handle of her regulation particle gun, Shea Waters stepped forward.

“OK, can the attitude.” she said. “Why not let us go back through the portal and forget the whole thing?”

“Laughable!” said the voice. “That portal is unidirectional. Any child could tell you that. Initiating transmat. By the Universal Elements, stand still.”

Splayed out before them on a shiny operating table was their B3N unit. From the android’s open chest cavity, it was obvious that their captors had satisfied their curiosity.

“Who knows, Lieutenant?” said Marla. “But know this: I do the talking for this team. Your little cowgirl routine could have gotten us killed on the spot.”

“Actually, Commander,” said Sumner, “a little arrogant posturing is often interpreted as a show of hidden strength. The Lieutenant may have bought us some time.”

“Maybe, Doc,” she said, “if we were dealing with a tribe of chimpanzees. But these … beings … are way more advanced than we are.”

“Technologically, yes,” said Sumner. “But you heard that alien bully refer to an ‘imperial magistrate,’ right? An “empire” isn’t a concept sociologists associate with an advanced society.”

“Think we can use that?” asked Marla.

“Maybe,” said Sumner. “Look, here comes … someone. Mind if I try an experiment?”

A peculiar popping noise arose in the near distance and grew steadily louder, as a six-legged, greenish cephalopod clambered over to them, dressed in a yellow encounter suit.

“Whose flunky are you, then?” she snapped. “We’ll speak only to the head honcho.”

“I am Chief Interrogator Plosh,” the creature said. “And you will speak not at all, except to answer my questions.”

“Your demands are irrelevant,” said the cephalopod.

“Plosh, I commend you,” said Sumner. “You’ve just passed the first phase of your evaluation.”

“What nonsense is this?” he asked.

“The … the Emperor sent you personally?” asked Plosh.

“Please. As if he’d actually speak to a biomechanical construct,” said Sumner. “Perhaps I should change my report.”

“No, wait!” said Plosh. “You caught me off guard. Just let me confer with General Jilharn.”

“Wouldn’t advise that,” said Sumner. “This is a top secret investigation. Jilharn is the real target. There have been certain ... irregularities … in his last three financial reports. You wouldn’t know anything about that, would you?”

“I told him his extravagances would get him In trouble. But wait, if the investigation is secret, why are you telling me about it?”

“Plosh, Plosh, Plosh, I see you lack the instinct for command,” he said. “The Emperor has studied your excellent service record and wants you to help document Jilharn’s abuses. I’d hate for my report to show he was mistaken about you.”

Plosh collapsed on the floor and extended two of his tentacles toward the human.

Sumner reached out a hand and patted the miserable cephalopod on its closest tentacle.

“Spoken like a true commander,” said Sumner. “Now you must demonstrate your ability to make executive decisions. Send us back through the portal and report that we posed no threat.” “Oh dear,” said Plosh, “that’s a problem. As I told you, that portal is unidirectional. The time portal I need to send you back is several thousand thlaarn away.”

“Can you get us there?” asked Marla.

“It will require subterfuge,” said Plosh. “But, as it happens, General Jilharn, is on another of his illegal jaunts. Now, are you familiar with the concept of transmogrification?”

“Why do I suddenly see tentacles in my future?” asked Shea.