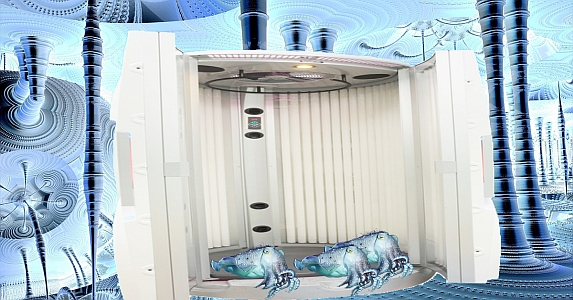 Nothing could prepare the away team for the terrifying appearance of the Fletrian “transmogrification chamber” that was their only hope of escape. Worse, they were forced to hide for several hours inside a narrow shipping crate, with just enough oxygen left in their encounter suits for the bumpy journey. So it was that, half a day later, they emerged from the crate, cramped and shaken.

“I apologize for your discomfort,” said Plosh. “I hope the Emperor will understand.”

“Right,” said the alien. “Time is short. I was only able to book this device for a single knall. It seems the General has many uses of his own for transmogrification.”

“Include that in your report,” said Sumner. “Now, really….”

Plosh nodded, then delivered the bad news. To ensure accurate results, they’d have to enter the chamber without their suits. Marla frowned.

“Not exactly standard protocol,” she muttered to Sumner.

“I … I promise not to look,” said the red-faced culture specialist.

Reluctantly, the away team stepped out of their encounter suits and into the transmogrification chamber — a forbidding mass of status lights, knobs, toggle switches and readouts topped, incongruously, with a large steam valve.

“When the process is complete, you will be Fletrian,” said Plosh. “To avoid becoming permanently fused, do not touch one another at any time.”

“Not much chance of that … unfortunately,” thought Sumner.

A moment later, Plosh closed the chamber and entered a command string on a small keyboard. The three humans lost consciousness and the chamber executed their genomic remapping with stoic silence. No bleeps, whoops, clacking keys or ticking timers rang out from it. Just an inordinate amount of water vapor, pouring out of its top valve.

Yet a quick check of the chamber’s readouts assured him that the process was going smoothly. Soon after, the chamber emitted a single, confirmatory chime not so different from an Earthly toaster bell. Now the chamber’s massive doors swung open.

Out stumbled three confused former humans, each one adjusting to their six new tentacles with varying degrees of success.

“Very weird,” said Shea. “Hey, how will you explain the existence of three new Fletrians? We don’t exactly have identity cards.”

“Good point Lieutenant,” said Marla. “And by the way, Plosh, how come we can understand you? I can’t believe that … machine … left our subcu translation circuits intact.”

“Those were filtered out by the transmat beam that brought you here,” said Plosh. “We’ve been communicating by direct stimulation of your language centers ever since. But to answer the Lieutenant’s question, I’ve transformed you into three specific Fletrians. The originals are still in the transmat buffer. You see, they were recently arrested and I was just about the bring them in for interrogation when you three arrived.”

“So you’ll put us in a prison transport?” asked Sumner.

“Exactly,” said Plosh. “I’ll give the auto-car a special set of instructions. Instead of Djoolafar prison, it will deliver us to the time portal I mentioned.”

“Won’t the transport’s AI recognize that the time portal isn’t inside a prison?” asked Marla.

But as the Chief Interrogator explained, his override commands would take care of everything. Sumner nodded.

Plosh waved a tentacle, and the dispirited band of transformees began following him out of the room. That is, until a burst of high- and low-pitched sirens stopped them in their tracks and a heavily armed Fletrian patrol unit barged into the room.

“Good work, Interrogator,” said the unit’s commanding officer. “We’ve been wanting to nab the Helnartrian smuggling ring for weeks. Hand them over. The sooner they start rotting in jail, the better.”

“But Commander,” said Plosh, “they represent the Emperor.”

“Do they now?” asked the officer. “Maybe you should come with us, too. You must be an imposter. I can’t believe the real Plosh would fall for a line like that.”

Unable to flee in their awkward new bodies, Marla, Shea and Doc Sumner had no choice but to follow orders. Plosh, however, put up a fight.

But he was silenced instantly by a stun-blast from the officer’s particle rifle.

“Come on,” he barked to his unit. “Pack this one up with the others and let’s move out.”

Sumner smacked his forehead with three of his new tentacles.

“Doomed, Lieutenant?” he said. “Doomed would be a step up.”