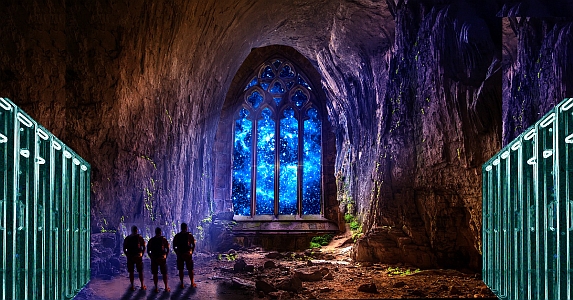 While Marla, Shea and Doc Sumner cowered in a far-future prison, Ensign Ng and the rest of the away team pieced together a plan of action.

“Try the Commander on the comlink again,” said Ng.

“Sir,” said PFC Signoretti. “With respect, we’ve tried a dozen times in the past hour.”

“But Sir,” she said. “What if the Commander, the Lieutenant and the professor are down?”

“Possible,” said Ng. “Is there anything suggestive in the scanner data?”

Signoretti explained that the energy surge had a distinctive envelope: an initial swoop up to a higher level, a plateau, and a swoop back down to baseline.

“Kind of like a door opening and closing.” said the soldier.

“Could be, Sir,” said Signoretti, “if the threshold were a transmat portal.”

Ng crossed his arms against his narrow chest.

“I can’t name a single physicist,” he said, “who thinks matter transfer is viable on a human scale.”

“How many of them have seen a Fletrian burial chamber — or whatever this is?” said Signoretti.

Chalmers looked up from her equipment.

“Excuse me, Ensign,” she said, “but our records also show a localized temporal anomaly at exactly the same timestamp.”

“It can’t be,” he said. “No one believes in macro-scale time travel, either.”

“Sir,” said Signoretti, “I agree there’s a lot we don’t know. But here’s what we do. The rest of the team is gone. We might never get them back.”

“We have to try,” said Ng. “Hand me that empty rations tin and let’s move out. Bring your portable scanners.”

The Ensign’s two subordinates glanced at each other, then followed him up the slight incline that led to the threshold.

The thirty-something biologist swung his skinny right arm gently a couple of times, before tossing the empty food tin through the threshold. It disappeared in a flash of blue light.

“Must have gone somewhere,” said Signoretti. “But I don’t see it on the floor on the other side of this … portal.”

“Sir,” said Chalmers, “You might want to see my scanner readout, first.”

Ng and Signoretti peered at Chalmer’s scanner over her shoulder.

“Same surge,” she said. “Only this time, the temporal shift is plain as the moons of Mars. Sir. I don’t think the Commander and the others are in this cave. At least not in this timeframe.”

“Probably not,” said Ng. “But the holovid our B3N unit played before we walked in showed an elaborate interior. I’ll bet there are clues to what happened right here.”

Legs trembling, the three remaining members of the away team squeezed past the threshold on its right side and headed down the corridor that opened out before them. Five meters ahead, they found an entryway, leading down a steep ramp to a rock chamber at least ten times the volume of the cave’s vestibule.

Yet, between its intricate wall carvings, banks of blinking devices and the three-meter view screen that dominated its north side, it was a rock chamber in name only. A glint of light in the near distance caught Chalmer’s eye and she strode off to check it out.

“Sir,” Chalmers called out. “You might want to see this.”

Her two companions jogged over to her and gazed into the immense, polyglass-lined pit at their feet. Rising up to waist-level was the pit’s equally large polyglass dome. Even more astonishing was what the pit contained. Signoretti’s hoarse whisper broke the silence.

“Could be a holojection,” said Ng. “The question is, what’s made the Fletrians curious about Earth?”

“You, of course,” said a deep voice not two meters behind them.

A large, greenish cephalopod emerged from the shadows to their right.

“Your arrival has altered the flow of Time,” it said. “I am Klardoth and I am here to warn you.”

“Or for much else,” the cephalopod told him. “Unless you retrieve your friends and return to your world, the arc of time in which sentient life exists will soon run its course.”