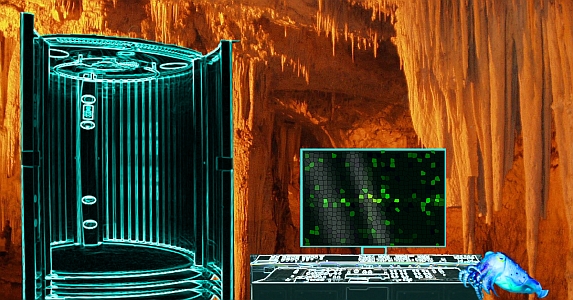 Ensign Ng yanked his regulation lase pistol out of its holster and pointed it at the cephalopod. He considered this a vital show of strength, even though, as a science officer, he could still count the number of times he’d actually fired a shot.

“You want to explain that?” he asked. “I have three crew members to account for.”

“Suffice it to say,” said Klardoth, “that Fletria sits at the center of a galaxy-wide temporal anomaly — in which the arrow of Time, as it were, has been reversed. Though your companions believe they have entered the future, they have actually entered the deep past.”

“If you’re right,” said Ng, “what can we do about it? They could be anywhere by now, including dead.”

“Even if they have perished,” said the alien, “we cannot resolve the temporal paradox unless we retrieve them.”

“But how?” asked Chalmers.

“Remember, your companions have entered the past,” said Klardoth. “Our historical record tells us where they are, and how you will bring them back. You may, however, find the method distasteful.”

Signoretti threw his hands in the air.

“What could be worse than total annihilation?” he asked.

“I will transform you, temporarily, into beings like us,” said the alien. “You must then impersonate three high government officials and demand their release. Once you return, the odds are good we can restore you.”

“The odds … you mean the process only works one way?” asked Ng.

“Follow me,” said the alien, “and I will explain. We face two obstacles. First, while our transmogrification techniques are sophisticated, the genome of any species is not infinitely flexible. Second, to the extent that returning with your companions resolves the immediate crisis, we cannot predict how it will affect the overall timeline.”

“You mean your transmogrification technology might never have been invented,” said Chalmers.

“A noble sentiment,” said Klardoth, “however, our records show that the three of you went together. We don’t have the luxury of improvising.”

Ng hung his head, but realized that, ironically, the most “military” thing he could do was assess the situation realistically.

With a flourish of tentacles, the cephalopod opened a panel in the rock wall. Behind it, was a more compact version of the chamber that Marla, Shea and Sumner had entered hours ago, in the future … that was their past.

The three humans tiptoed into the chamber. It occurred to Ng that all this time, the crew of their base ship had made no effort to contact them. Had Fletria’s temporal anomaly frozen them in time?

For better or worse, in just a few minutes, Ng and the others had more pressing concerns — including how to stand up on six tentacles.

“Ow!” said Signoretti who had just fallen down head first.

“Take a few moments to get oriented,” said Klardoth, “then you must enter the time portal.”

“Hold on,” said Ng. “We have no idea who we’re supposed to be. And whose orders do we cite to get custody of the Commander and the others?”

“On that score, our records are fuzzy,” said Klardoth. “All we know is that you succeeded.”

Chalmers slapped her two front tentacles onto the cave floor.

“Wait a minute,” she said. “If your records are accurate, we don’t need to go through this. We’ve already retrieved the rest of the team.”

“That, I’m afraid, is a consequence of the anomaly,” said Klardoth. “You don’t realize it, but you have already completed this cycle.”

“A time loop?” said Ng. “But the only way out is to break the pattern. We have to do something different.”

“What you propose is … intriguing,” said the alien. “But what would it entail?”

“You could send me back to the moment before the Commander decided to explore this cave. She’ll never know it’s me — and neither will the ‘me’ from back then. I’ll warn them about the portal and you can zap me back here.”

“Then what?” asked Signoretti. “We stay like this? Won’t we have the same multiple timeline problem?”

“I cannot be certain,” said Klardoth, “but if we can prevent your comrades from entering the time portal, it might resolve both the mounting paradox and the temporal anomaly engulfing this world.”

“And if It doesn’t?” asked Chalmers.

“Your remaining lifespan will be blissfully short,” said Klardoth.