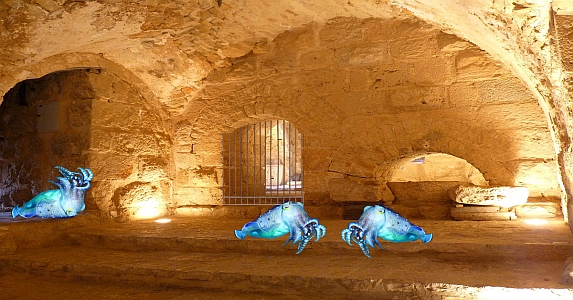 Crammed into a dank, malodorous cell in Fletria’s past, Commander Marla Kapstein, Lieutenant Shea Waters and Doctor Darian Sumner tried to reconcile themselves to the prospect of life imprisonment. Their former cell mate, Chief Interrogator Plosh, had already been escorted out, once his name was cleared by his superiors.

As it turned out, his only punishment for allowing himself to be deceived, was demotion and early retirement from government service. Meanwhile, as the two former military officers paced the cell floor, Sumner slept in the far corner, where he’d sunk into a pitiable heap, the moment the cell doors slammed with a deafening clang.

“Plosh sure got off easy,” said Shea. “We’re stuck here for good.”

“Stop that negative thinking,” said Marla. “That’s an order. As long as we’re alive, there’s a chance we can find a way out of this mess. And don’t underestimate the rest of the team. They might have a plan of their own.”

Judging from the sound of Marla’s voice, Shea decided to keep her misgivings about Ensign Ng’s leadership ability to herself. Despite the disorienting fog of transmogrification, there was no doubting the Commander’s mood. Instead, Shea tried to become better acclimated to her strange, cephalopod body.

The first step, she decided, was to relax and let her Fletrian senses make what they would of her surroundings. It was time to give in, and learn how to see the world, quite literally, through new eyes. She took a deep breath, released it and, immediately, felt the tension drain out of her body, especially the six tentacles she hadn’t yet learned how to control.

In the process, her vision blurred, but not in the way she was used to. It was more like what had happened every time she’d adjusted a pair of binoculars. The walls of the prison cell appeared to “zoom out.”

The effect was so dramatic, it made her wonder if she could make her new eyes “zoom in” on the bleak, brown wall in front of her. She was amazed to discover that, simply by imagining the effect she wanted, the wall came into sharp focus and she could see several grades of fine detail in its surface.

Shea’s breath came up short as she was now able to read an inscription carved into the wall opposite the cell’s door. More surprising, the inscription was in Planetary Standard, the language used on her homeworld and every Earth colony. After one more look, the Lieutenant extended a wobbly tentacle towards the wall and called out to Marla.

Marla, still fuming over their previous conversation, nevertheless stumbled over to the wall and peered at it.

“Don’t see anything,” she said.

Marla frowned but decided to give it a try. As her focus shifted she gasped, and with good reason. The inscription read:

“incredible,” she said. “This … this can only mean we’ve been here before. But how is that possible?”

Beside themselves, the two officers, shook Sumner awake, which took more than one try.

“What are you talking about?” he asked at last. “And why would you wake me, when sleep is the only escape from this Hell?”

But as Marla recounted their strange discovery, his mood brightened.

“We must be in a time loop,” he said. “You made that inscription the last time we were here.”

“Of course,” said Sumner. “But the time loop zapped us back here again. Unless we break out of it, we’re liable to repeat this conversation for eternity.”

“How would we break out?” said Marla. “Wouldn’t everything we do be part of the pattern?”

“Maybe,” said Sumner, “unless we do something extremely uncharacteristic. Here, both of you, kiss me.”

“What?” asked Marla. “Doc, this is hardly the time for pranks.”

“I’m serious,” said Sumner. “And your reaction proves my point. Kissing me is the one thing neither of you would think to do in a million years — with or without tentacles. It just might work.”

Marla looked at Shea and shrugged.

“Not like we have anything to lose,” she said.

A moment later, the two EarthGov officers leaned in and kissed a frightfully embarrassed culture specialist on his cephalopod mouth. After a few tense moments in which the Commander began to wonder if she’d been duped, their surroundings started to blur. Was this the end of their ordeal?