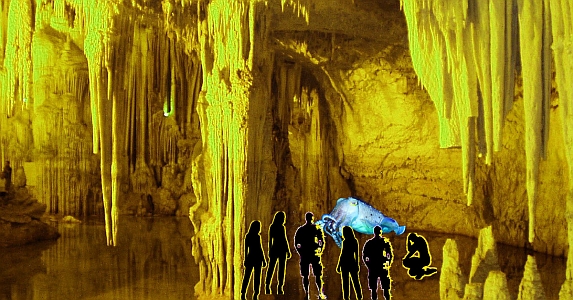 The six-person away team from the EarthGov ship Heaven Stormer believed they’d just arrived at the mouth of a Fletrian burial chamber after an exhausting trek up a snow-covered mountain. Grateful for the cave’s warmth, they had no way to know that they’d just popped out of a time loop with the potential to ensnare them a second time.

For now, as their presence in the chamber confirmed, they’d temporarily broken free of the time loop. But they were still in danger, because planet Fletria itself was out of alignment with linear time. In fact, their fate now turned on how they might respond to an immanent warning.

As she had in her first cycle through the time loop, Commander Marla Kapstein decided to explore the depths of the burial chamber. But before she could take her first step, a greenish, opaque mist appeared a few meters to her left and solidified into a distinct shape.

Yet if he were perplexed by the creature itself, he would’ve been shocked by its identity. For the cephalopod was actually another version of himself that resided in an alternative timeline. And before any member of the away team could process its arrival, the creature opened its wide mouth to speak.

“Beings from a distant world,” the alien said, “leave at once. Fletria is engulfed in a temporal anomaly. Return to your ship! And whatever you do, don’t enter the portal that lies just beyond that ridge.”

Marla shook herself free of panic and consulted the B3N unit assigned to her mission.

“What do you think, Ben?” she asked the android. “Are we hallucinating?”

“But how did that alien get here?” asked Lieutenant Shea.

“Insufficient data,” said the B3N unit. “However, the gravitational fluctuations that preceded its materialization suggest that it may have arrived through a time portal.”

Marla’s heart raced as she turned back to the greenish creature.

“First you warn us about an anomaly,” she said, “which none of our instruments have detected. Then you try to steer us clear of a valuable piece of tech. What are you hiding?”

“Please,” said the cephalopod. “The danger is real. Your instruments and your memory have been affected by the anomaly. But now that I’ve warned you, maybe your B3N unit can….”

“What?” asked Sumner. “How would you know the make of our android?”

“Ask Ensign Ng,” said the alien. “And while you’re at it, ask him why he keeps daydreaming about Lieutenant Waters.”

“Craters, that thing is me,” he said. “That explains the weird dreams I’ve been having. Commander, we must leave now. Otherwise, the time loop we’re stuck in will never be broken.”

“Sounds so crazy,” said Marla. “How do I know this isn’t space sickness?”

“Excuse me, Commander,” said PFC Chalmers. “But what’ve we got to lose? If we return to base and this story doesn’t check out, we can come back next season. If it’s true, we’ll have tons of data on the first-ever verified temporal anomaly. We’ll all get medals.”

Marla threw up her hands.

“Fine, nothing in the Handbook says we have to risk our lives on a non-combat mission. Pack it up. We’re moving out.”

At that, the cephalopod faded out of view — and Marla’s comlink buzzed for the first time since they touched down on the planet. She answered the device and the voice of Communications Officer Kayla Butler crackled out, loud and clear.

“Commander?” said Kayla, “I’ve been trying to reach you for hours.”

The relief felt by every team member was palpable — all except Signoretti, who was preoccupied with a painful itching sensation on the underside of his right arm.

By now, the snows that had plagued the away team’s ascent to the cave had abated. With their gravity modulators on maximum, they climbed down easily. Nevertheless, Ensign Ng found the trip agonizing, for he had to endure the Lieutenant’s sneers whenever their eyes met. Lucky for him, once onboard the Heaven Stormer, there was plenty of ship to get lost in. Soon he and the rest of the away team settled into their regular routines.

All except Signoretti, who requested a trip to Sick Bay within minutes of coming onboard. Nor was the medical team’s report reassuring. The itching sensation, which now extended to his right shoulder, had a disturbing cause.

A rip in the skin had occurred, through which emerged a single, green tentacle. Space-time, it seemed, though nominally healed, would bear the scars of its recent laceration for thousands of years to come.