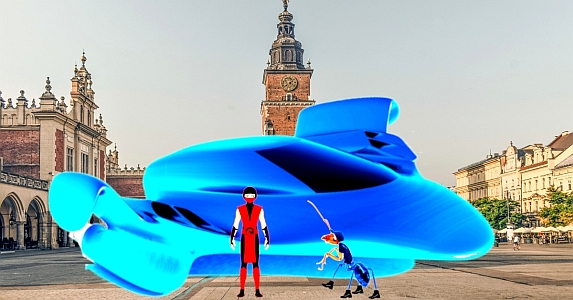 Kleem rushed to the Quartermaster’s office at 0600 the following morning, and stood on a long line of nervous, young Galorns who were just as scared as he was. To his right was a similar line for young Helianu which, predictably, moved much faster.

Worse, the attendant handling the Galorn line looked as if she were at least 80 cycles old. With a bit of reflection, he realized that, as boring as it was to wait, the situation was hardest on her. So much heavy lifting! Besides, despite her thick eyeglasses, she still held each requisition order no more than a centimeter away from her proboscis. When he finally reached the head of the line the exhausted attendant greeted him with a grunt.

“What are you?” she asked. “Fleet or infantry?”

“Dunno,” said Kleem. “I just have this slip of paper from Antonio.”

The elderly Human attendant trained an optical scanner on him to determine his size while he answered her gruff questions as calmly as his racing heart would allow. Finally, after rummaging around her work area, the attendant pushed a cardboard box marked “Fleet Requisitions,” toward him, across a black counter top.

“Report to Training Center C,” she said. “Don’t look at me like that, there’s a map right on your slip. Next!”

Kleem grabbed the slip from the counter, stuffed it into the box and set off. The walk to the Training Center, a good half kilometer away, gave him a little time to sort through his thoughts. For now, it seemed more likely that he’d spend the rest of his brief life getting shot up by a boarding party than plotting against the Humans. With these dark thoughts, he entered the Training Center and was hustled into a large basement changing room — a place where bad smells went to die.

The only saving grace was that Kleem’s new, sapphire blue uniform fit perfectly, including the set of four shiny black boots. Best of all, nestled in with the clothing was a high-tech comlink. With his eyes glued to the comlink’s tantalizing buttons and switches, it was all he could do to keep from tripping as he hurried out of the changing room.

Minutes later, he was out in the fresh air, in a holding area where new recruits were paired with an appropriate robotic drill sergeant. It was such a beautiful day that Kleem longed to break ranks and make a run for it. But a second later, his new comlink emitted a quiet chirp. He pressed the TALK button with a trembling finger.

“Do not speak,” said the Intelai on the other end. “Anything you say is traceable. Humans have landed in every major city on Helianu. I have contacted a Kleem in each one and informed them of our plan. You’ll each be assigned to the same ship as the Human away team that touched down in your city. Play on their “nerves.” Meanwhile, I have modified the sonic disruptor to make them more susceptible to your rumors.”

The line went dead. Kleem’s two stomachs churned in a tight rhythm. He had so many questions he felt as if he’d burst if he didn’t get the answers he wanted, and fast. But the next second, a dull red drillbot clapped him on the shoulders.

Head down to hide the grimace that swept over his face, Kleem clipped his comlink to his belt and trotted after the robot. Before long, they reached a hastily erected shooting range that sheltered under a roof of corrugated tin. Was this, he wondered, the best the Humans could do? Maybe the Intelai was right: these weren’t the top-of-the-line beings that had first bred and then enslaved his species.

All the same, the drillbot was more than competent to slap a pulse pistol into his hands and give him a few pointers before he began target practice. With a combination of surprise and horror, Kleem discovered he was a pretty good shot. While he was proud of his natural ability, the idea of actually shooting someone brought him pretty close to losing his breakfast. Yet if he’d had any hope of settling down, it was dashed by the sight of Antonio striding toward him from behind the lander that was parked nearby.

“There you are,” he said. “And from the report I just received, I see you’re an excellent shot. I’ll need a guy like you near me if things get dicey. I’m transferring you to my personal guard.”

“You know, Kid, you kill me,” he said. “Get in the lander. I’ll complete your training on our way to the drop site.”

Kleem didn’t like the sound of that, but paradoxically saw it as a stroke of luck. And what, he wondered, if Antonio’s snarky remark turned out to be prophetic?