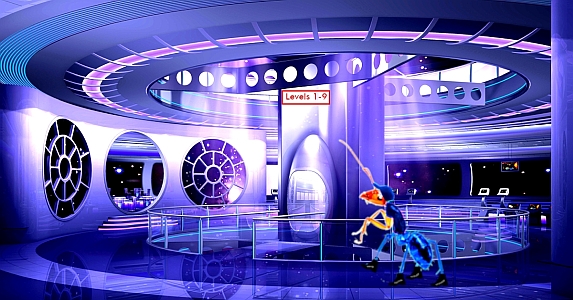 After a short ride in the Human lander, Antonio led Kleem onto a large, menacing battle cruiser. The young Galorn was frankly overwhelmed by the ship’s scale and complexity. The Intelai, he remembered, had said that these Humans weren’t as technologically advanced as their ancestors. What, he wondered, must their ships have been like?

“Follow me, Kid,” said Antonio. They soon reached a glittering computer workstation, studded with three holographic view screens. In the ship’s dim light, Kleem’s compound eyes strained to take it all in.

“You’ll be my eyes and ears,” said Antonio. “I need somebody I can trust. Nobody else had the guts to tell me what Olivia and Natalia were saying about me.”

“You worry too much,” he said. “Here, try these headphones. They’ll form a direct neural link to your brain and download instructions into your cerebral cortex. I’ll check back with you later.”

Kleem watched the Human stalk off, then wasted no time obeying. At first, the wireless headphones made his head tingle uncomfortably — until the Intelai’s voice entered his ears.

“Listen closely,” said the Intelai. “Learn all you can at this station. It will help you infiltrate this ship further. As soon as you locate Olivia and Natalia, go to work on their egos. Fear not, our plan is proceeding on schedule.”

The Intelai’s voice faded out and was replaced with a rush of data. At first, it sounded like gibberish, until at last, the workstation mapped its machine speech onto his language centers. While that was reassuring, Kleem had to admit the tension was mounting. How long, he wondered, until the Human field marshal realized that Kleem was no security expert?

And yet, as the headset continued its work, he had to admit that he’d already gained an extensive overview of the Human warship, level by level. That should mean he could locate the other two members of the away team that appeared in the Laltrana town square the day before. All he had to do was call up their names on the secure personnel roster:

With only a little more effort, Kleem located them on a schematic of the base ship that his workstation called up before he had a chance to ask for it. He was in luck, because the two operatives were in different parts of the ship and he could easily map out a route to either of them.

Without Antonio’s permission, he dared not leave the workstation. The last thing he wanted was to lose the fragile advantage he’d gained for himself by taking bold action. Case in point, the headsets told him Antonio was on the way back! Kleem looked up to see the tall Human stride up to him in his red jumpsuit. But what was in the metallic box he held?

Kleem’s eye bulged as he took the box from the Human and opened it. Inside was a gleaming pulse pistol, much more elegant than the one he’d tested back on Helianu.

“That’s enough for now,” said Antonio. “Take this piece down to the Training Center and get yourself battle ready. If we run into a Velradrese boarding party I’ll need a sharp shooter like you to cover me.”

Stunned, Kleem stood up, tucked his new pistol into the holster that he now saw was already part of his uniform and, after a solemn bow, pivoted away from the Human toward the nearest bank of maglev lifts. Needless to say, he didn’t head straight for the Training Center.

Instead, he set out to find Natalia. Fortunately, the wireless headset kept him linked to the mapping software in his workstation and, in no time, he’d pinpointed her exact location. He found her sitting alone in the Officer’s Mess. Her startled expression conveyed a symphony of contempt in a single snarl.

“What are you doing here?” she asked.

“Sorry, My Lady,” said Kleem. “I took a wrong turn. But now that I see you, I’m curious about something.”

“I see you have hardly anything on your plate,” said Kleem. “So I can’t figure out why Antonio thinks you eat like a pig.”

“What … how do you now what Antonio thinks?” said Natalia.

“I overheard him talking to Olivia,” said Kleem, “on my way to the training center. But I must be mistaken. I’m sure he didn’t mean….”

Natalia jumped up and point to the door.

Kleem hurried away and ran down the corridor to the nearest maglev lift. A satisfied smile crossed his mandibles as the lift doors closed. A moment later, his mood shifted when an ominous announcement blared over the ship’s comsystem.

BATTLE STATIONS. VELRADRESE CRUISER CLOSING IN FAST. THIS IS NOT A DRILL.