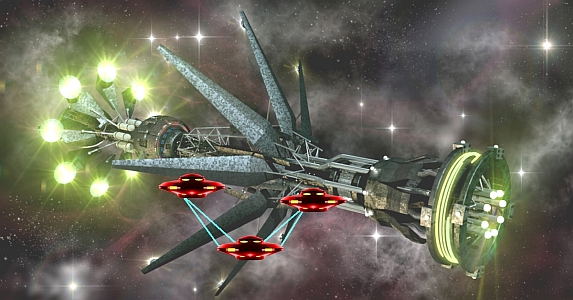 All four of Kleem’s knees locked as he tried to process the dire news. An actual assault by the Velradrese? And here he was on the Human command ship. No sense hoping he could hide in a closet at the tail end of the fleet. He had a front row seat. Worst of all, the scene about to unfold would be nothing like the “exciting” battle scenes he’d seen in countless holovids or played through in video games.

Could actually get shot up or … or killed, his thoughts raced.

With no idea what else to do, he headed back to his workstation. Maybe the neural link in his new headphones would help him plan his next move. The ship was in chaos. Panicked Human soldiers and their new recruits tripped over themselves to reach their battle stations. Kleem could barely squeeze back into the maglev lift, but he was glad to catch some of the crews’ chatter. Unfortunately, the news was not good. The Velradrese, it turned out, had superior tech and were ferocious warriors. As one Lieutenant told her subordinates:

“Whatever you do, don’t let those … fur balls … fire a disinto at you. Turn you to dust in a second.”

Kleem gulped. At last, the lift’s doors slide opened at his floor and, with a fair amount of shoving and kicking, he managed to squeeze himself out again. Terror tore at his throat, but he knew that his only hope was to focus. He raced back to his station, where Antonio was waiting for him.

“Good,” said the Human. “I figured you’d skip the Training Center. Training is over. Get wired up and patch yourself into the enemy comsystem. Our only chance is to anticipate their next move. Com me as soon as you have something.”

Kleem nodded as Antonio bounded away. Though Kleem’s first impulse was to run for the nearest escape-pod bay, he knew that keeping Antonio’s trust was the one thing that might save him. Besides, what did he know about piloting an escape pod? He took a deep breath, sat down at his workstation and put the neural interface headphone back on his exoplated head. At once, he heard a familiar voice.

“Do not be afraid,” said the Intelai. “There is no Velradrese attack. I have created a series of interlocking data ghosts to build that illusion. In a minute, I’ll be through to your ship’s AI — a crude piece of business. Then the fun really begins.”

“Quiet!” said the Intelai. “You are about to witness a rare feat of holographic simulation.”

Baffled, Kleem could barely concentrate, but forced himself to fake a search for the non-existent enemy comsystem. In next to no time, it looked like he’d found it, but now he was faced with a dilemma. Was this signal he’d discovered also part of the Intelai’s illusion, or was there actually a Velradrese ship nearby?

Before his next breath, a chunk of the ceiling to his right came clattering down in a hail of composite carbon shards. Instantly, a squad of otter-like creatures ratcheted down to the floor of the Command Center on motorized cables. Each of the alien soldiers wore a dull black encounter suit and carried a menacing pulse rifle.

“Spread out,” said the enemy commander. “Find the Human leaders.”

Kleem’s abdomen clenched as six fierce-looking warriors stormed past as if he didn’t exist, and headed for Antonio’s quarters. Kleem shook his head. He actually found himself worrying about the spiteful Human who’d invaded his homeworld. And yet, if the enemy were real, where would they take him after securing the ship?

Have to figure they might kill me, he told himself.

At that moment, his headsets informed him that three escape pods had just shot out of the war ship’s launch bay. And not only did the three pods contain each of the three Humans who’d landed on Helianu, three days before, but they were firing on each other! Kleem rushed to monitor their comsignals, then sat back and enjoyed the show. The Intelai’s plan had been foolproof.

“You think I’m so dumb,” he heard Antonio say. “Well, I’ll show you who knows one end of a weapon from another.”

“Yeah?” said Natalia. “Well if I’m so fat an gluttonous, how come I can blow you out of space, like this?”

“What’s the matter with you two?” shrieked Olivia. “Don’t you get it? We’ve been set up. Do you see even a single Velradrese ship within ten lightyears of this….”

A moment later, there was nothing but dust and debris where the three escape pods had been. The Intelai’s voice turned up on Kleem’s headphones again.

“See?” it said. “Threat eliminated. Now let us see about getting you all home again.”

“What about the rest of the Humans on this ship?” asked Kleem. “Won’t they just take over?”

A gruff announcement in an alien voice, over the ship’s intercom proved the Intelai was even more devious than Kleem had imagined.

ATTENTION HUMAN SCUM. YOUR LEADERS ARE DEAD. YOUR AIRLOCKS AND LAUNCH BAYS ARE SEALED. LIFE SUPPORT IS SHUT DOWN. SURRENDER!