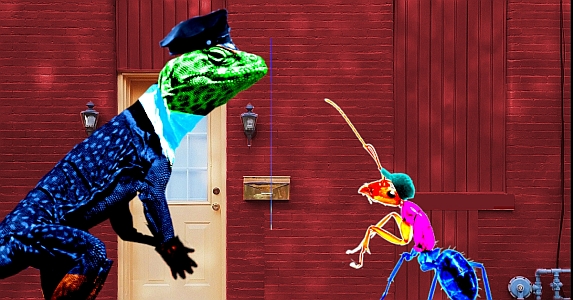 “Shouldn’t we, like, try to help him?” asked Kleem.

Pelidor stared at the anxious Galorni teenager and tried to decide his next move. His first instinct was to report his sighting of what appeared to be a genuine Human artifact to his precinct headquarters so they could begin an investigation. Then it dawned on him. There was no way the Human who appeared on the tablet at his feet was crying out in real time.

“This has to be a recording,” he said. “There’s no way this … guy … is still alive. Last I heard, the Humans died out at least three thousand cycles ago.”

“Died out totally?” asked Kleem. “Or just died out here?”

Pelidor swallowed hard. That’s why he valued his time with Kleem. It wasn’t just that he was a “good kid.” Kleem’s quick mind ran rings around Pelidor’s by-the-book thinking. Pelidor had simply accepted the stats and specs he received from the Department and moved on to his daily routines.

“This is a job for Remnant Reclamation,” he said. “Most I can do is call it in. And you, if you know what’s good for you, will tell no one. Remnant areas are off-limits to Galorns.”

Kleem kicked the dirt at his feet.

“Nice,” he said. “Real nice. And what? Does the Helianu Apex think we’re gonna spit on everything?”

“So why don’t you act like you don’t agree?” asked Kleem. “Thought you were different. If it were me, I’d take this … tablet thing … to the Intelai. Bet she’d know what to do.”

“Yeah,” said Pelidor, “I have my orders. And like I said, there’s no emergency here. This has to be just a storyvid. The tablet’s old. Probably got stuck on this vidframe before we were born.”

Kleem looked down at the tablet.

“What if you’re wrong though ... Officer Granku?” he said. “What if that’s a real, live Human, and he needs our help?”

“Look, Son,” he said. “I think it’s great that you care so much. We need more of that. But if I take this tablet out of this area, it all goes down hill from there. The Intelai will contact my precinct, they’ll want to know where the tablet came from and I’ll get arrested. After that, all the focus will be on me. This Human, whether he’s real or not, will just be “evidence.”

“That’s just the way it is for me,” said Pelidor. “But nothing’s stopping you from telling the Intelai what you found. You know where to find it?”

“Where’d you hear that?” asked Pelidor. “It’s just a machine, a really smart machine left over from Human times. The most it would do is ignore you. My Lieutenant tells me it spends most of the day singing to itself.”

“Sounds like an insane machine, you ask me,” said Kleem.

“OK,” said Pelidor. “It was your idea to contact the Intelai. I’m just saying….”

A squawk from Pelidor’s radio made him turn away. As he feared, it was Lieutenant Tholian. He’d lingered just a little too long with Kleem. Where, the Lieutenant wanted to know, had he been when the Alkenru gang started busting up shop windows on Dorenkna Street?

“It’s only right on your beat, Granku,” said the Lieutenant.

“Right,” said the Lieutenant. “Like I’m delayed asking for your badge by a visit from the Council President. Shape up, Officer. Get your behind over to Dorenkna and help with the clean up. And say hello to your lady friend for me.”

Pelidor sighed. He was lucky that Tholian owed him one from that time he found the Lieutenant splayed out at a olgamkru house in the Jorlena quarter last month. Now, however, the debt had been repaid and he’d have to watch his step. With that in mind, he spun around to say goodbye to Kleem and remind him not to touch anything.

Too late. The Galorni boy and the tablet were both gone!

Had Kleem actually taken the ancient device to the Intelai, or was he planning to sell it to a collector on the black market? Pelidor wanted to chase after the boy, but his priorities were clear. Maybe after he was finished dealing with the Alkenru, he could catch up with Kleem.

Or maybe he was just getting too involved.

“Gotta start my own family,” he mumbled, as he stepped into his patrol car. But the odds of that, he knew were lower than low. After his break up with Lerdainvor… well, he was forced to realize he had a lot still to learn about life. In spite of himself, as he pulled out onto the street, a funny thought brought a twisted smile to his lips.

“Should ask the Intelai about that,” he said.