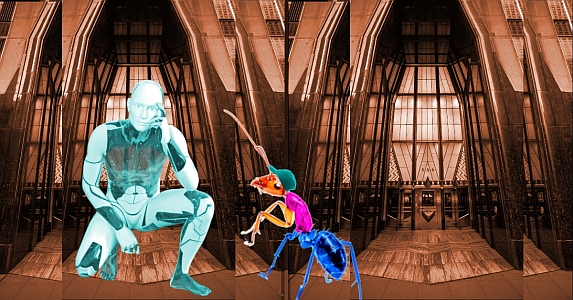 Kleem waited until dark, then slipped out of his bedroom window with the Human tablet tucked into his fleece-lined jacket. It was a risky maneuver, but the saving grace was that school had been suspended for a second day. The water main break in his school building had been just one facet of a major breakdown in the Weldrons, the Galorni section of town.

That meant, if his sneaky errand took longer than expected, his parents wouldn’t expect to see him at breakfast bright an early in the morning. But that was a mixed blessing. Breakfast had been canceled anyway, for lack of food.

Doubt the Intelai has anything to eat, he told himself, as he hurried along the dark, narrow side streets that led to the steep hills at the edge of his neighborhood. All the while, the human face on the tablet he’d stolen from the Remnant area the day before kept screaming, “Help me! Please, help me!” There didn’t seem to be a way to turn it off.

About half an hour later, Kleem stood at the base of the hills and stared up. He hadn’t figured on how he’d reach the cracked ruins where the Intelai supposedly huddled day in and out. Miserable, he raced along the sidewalk at the rocky base until he found a heap of stone rubble. His face brightened. Just above the rubble was an intact stone stairway that led nearly all the way to the top.

The lithe insectoid scrambled over the rubble and began a slow walk up the steps, whose very existence surprised him. The rumor was that the Humans used hovercars to get around. In Kleem’s world, the only hover car he’d ever seen was a prototype in a science expo. It was a hulking, clumsy thing that roared like a jet engine, just to go three feet in the air.

The Humans, by contrast, were said to have zipped around everyday in cars designed for casual use. That and the other fantastical tales Kleem had heard conjured the image of an idyllic life. There were no worries, every social problem had been solved and the Humans were free to indulge their whims. But come to think of it, he realized, that couldn’t be true.

Guy on the screen doesn’t look too happy, Kleem reflected. As the Galorni teenager was beginning to discover, every living thing in the universe had its ups and downs.

By now, Kleem had reached the first ridge of the hills. It was a flat, wide plane, littered with ruins. Many of those old buildings looked as if they’d been five times taller than the largest structures in Laltrana. Most were dead, silent hulks, but a few had faint glimmers of light peaking out into the pre-dawn sky. Kleem remembered what his Science teacher had told his class. Recently, Helianu engineers had reactivated a few of the buildings’ lowest floors.

Kleem was growing impatient. His stealth operation was taking longer than he anticipated. Which of the ruins housed the Intelai? He swiveled his ovoid head and discovered a structure six meters to his south that glowed more brightly than the others. He sped off in that direction, and saw that the glow emanated from a mid-sized building that looked as if it were being restored.

When he was less than a meter away, he saw a humanoid figure squatting in a doorway of shattered glass and twisted steel. Incredibly, the crouching figure was made of a dull metallic substance unlike anything Kleem had seen before. It spoke to him in a strangely androgynous voice.

“You have brought me something, have you, Kleem/minor/Weldrons Sector 132?” it said.

“Why yes,” said the android. “Unless you have evidence that I am not. I am open to considering that, if you can demonstrate….” Kleem took the tablet out of his jacket.

“No evidence,” he said. “And yeah, I brought this. Guess you must have picked up its, I dunno, its signal.”

“Very astute,” said the Intelai. “I like deducing things, too. It’s something we have in common. May I see it?”

Hands trembling, Kleem gave the tablet to the Intelai.

“You are troubled by the onscreen video, I assume,” said the android.

“Just gotta know,” said Kleem. “is that guy real? Is he, like, trapped in there?”

The Intelai fell over backward and emitted a sound that Kleem was forced to conclude could only be laughter. A moment later, it stood up. Kleem was astonished to see it towering over him at just over two meters tall.

“Sor … sorry,” said the Intelai. “You needn’t worry. This human is not trapped inside the tablet. He is however, trapped in a transmat buffer. Very sad.”

“You wanna explain that?” asked Kleem.

“I do,” said the Intelai. “but I am more concerned about what your biorhythms reveal. You have not eaten in more than twenty-four hours.”

“I’ll catch a sandwich later,” said Kleem. “Can’t you do anything for that guy in the tablet?”

“Interesting,” said the Intelai. “Your persistence is unexpected. The Humans who mapped out your genome did not anticipate that the Galorns would show so much spirit.”