Episode 4: Crazy as the Truth 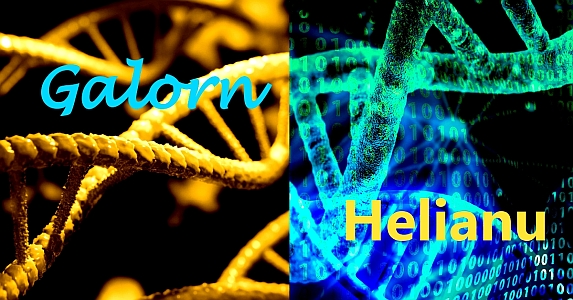 All the way back home, Kleem pondered the strange tales that the Intelai had told about the mysterious Humans. If he could believe the ancient android, both the Helianu and the Galorns were the product of a Human genetics program. Rather than wear out expensive androids on society’s menial tasks, the Humans created a new class of servant.

Each of the two new species began as subsentient creatures indigenous to a Human colony planet. After years of painstaking work, the Humans upgraded the intellect and self-awareness of a tree-dwelling lizard from one world and a tunneling insect from another. The former were deployed on the world that would eventually be known as Helianu. The latter were used on Jentror, which later became the center of a grueling interplanetary war. But there was more to the story.

The Humans had “hard-wired” obedience into each creature’s psyche. Helianu and Galorns could no more disobey a direct order from a Human than sprout wings and fly away.

“We were, like, slaves,” whispered Kleem. The word stuck in his throat. “Who’d even want that?”

At first, the Humans had basked in the glow of a society in which the work-for-goods ratio was minimized. They began by creating a separate education system for the “Modifieds.” According to a closely monitored trend analysis, conducted monthly, the Human’s home government calculated the number of Modifieds needed for each industry, technical discipline or branch of government

Less than a century after the program got underway, the vast majority of Humans were relieved of everything that might count as “toil.” They simply assigned every task they received from their employer to one of the minimum of two Modifieds assigned to them. Only the most critical systems and functions of Human society were off-limits to their servants. A Helianu or a Galorn might be trained to operate a computer, for instance, but not to build or program one.

Unfortunately, the Humans had neglected to account for genetic mutation. After several generations, both the Helianu and the Galorns experienced genetic drift. The subservient mental state that the Humans had built into them began to fade. The Modifieds became more independent minded, abetted by the Human’s own education system.

Eventually, the Humans were confronted with a Bill of Modified Rights, drawn up by a group of Galorns with advanced Law degrees. When they tried to dismiss the document as “nonsense” they were met with work stoppages, street protests and violent clashes with an android police force. The Humans were forced to make concessions. But from that moment on, they put every resource behind a new initiative.

“Thought-mediated tech?” Kleem mumbled. “Is that what the Intelai said?”

The fine points were lost on Kleem, but apparently, the Humans now dreamed of a world they could run entirely with their minds. A decade later, they completed the first thought-mediated world. Soon after, they fast-tracked the development of large transmat devices, without conducting proper safety checks. Against the warnings of their own scientists, Humans began a mass migration to a newly constructed colony, eight light years away from their originworld.

“Many Humans arrived safely,” the Intelai had told Kleem. “Hundreds of thousands more were trapped, when the transmat buffers became overloaded. This must be the fate of the Human you see in your tablet.”

With the Human overseers gone, Helianu and the Galorns went into a steep decline. The Modifieds on each world were locked out of the planetary power grid and central computers, knowledge of which the Humans had conveniently left out of their education. It was centuries before they became fully functioning technological societies again and, at last, hacked into the Human’s original computer systems.

Recently, data trapped in the Human transmat buffers had accidentally leeched into Helianu data systems. Like the Human in Kleem’s tablet, many were awakened from stasis and given a window onto the real world for the first time in hundreds of years. Converted into data by the transmat process, they lived on in a state of ghostly despair.

As the sun reached its zenith, Kleem arrived at the street where he was sure, his parents were waiting to punish him for sneaking off. When his parents’ one-story house was just up ahead, he spotted a Laltrana Police patrol car parked out in front. To the left of the car was Pelidor, talking to his mother — who looked up suddenly.

“There you are,” she said. “I don’t want to start on how much trouble you’re in. How do you think you made your dad and me feel? Over some crazy Human? Maybe you’d rather have a Human family.”

Kleem’s words stuck in his throat. Pelidor shook his head.

“What the neutrino pie were you thinking?” he asked.

“Thinking about compassion,” said Kleem. “And … and, don’t you ever want to know what happened to the Humans?”

“The Intelai does,” said Kleem. “Told me everything.”

“You spoke to the Intelai?” asked Pelidor. “Now I don’t know whether to take you into detention or the nearest hospital. The last guy who got that close to the Intelai went crazy.”

“I’m not crazy,” said Kleem. “Just doing what the Humans programmed me to do.”