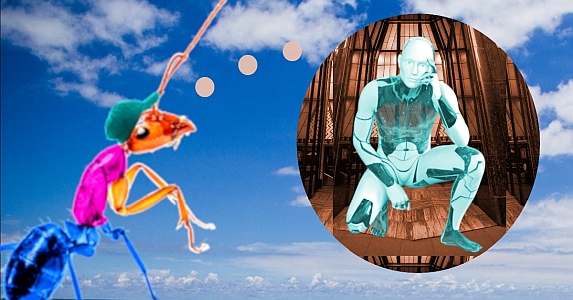 The next morning, down at the local Laltrana precinct office, Kleem sat for questioning, accompanied by his mother, Traal. After more than an hour of recounting his eerie conversation with the Intelai to Pelidor, the nervous Galorn teenager was led off to a gray interrogation room. A Helianu sociologist, computer scientist and geneticist were waiting for him.

The latter had raced in from Nildtraj City by bullet train. Though they all were skeptical, they couldn’t afford to rule out what they’d heard so far from the Laltrana PD. If the Helianu and the Galorns were actually the product of genetic engineering, that might help explain several bizarre inconsistencies in the DNA of either species. Fact was, Helianu geneticists were unable to reconcile the internal workings of the two species with their general theory of evolution.

Though Kleem found his interrogation intimidating, at least Traal was unexpectedly supportive. She projected an air of empathy that boosted his courage. Besides, in the second interrogation room, surrounded by placid academics with curious outfits and eccentric mannerisms, it was impossible to feel too scared. It was all Kleem could do to keep from giggling.

Yet the questions the newcomers asked made him think harder about the implications of the Intelai’s intricate stories of centuries before. Olianol, the genetics professor, who’d buffed his scales to a high gloss, was particularly keen to know more.

“A programmed instinct for obedience?” he asked. “I don’t suppose the android went into any detail about that?”

Jalikny, the computer scientist, who’d been tapping a stylus into the palm of her hand throughout Kleem’s deposition, shot out of her chair.

“Did you ask the Intelai about the Human’s transmat device?” she asked. “We’ve never found anything like that in the ruins.”

“Didn’t know what to ask,” said Kleem. “But the Intelai said I could come back. I kinda think it was lonely.”

“Seems to me,” said Kleem, “like anything that can think and sits alone all day might want a friend.”

“Speculation aside,” said Jalikny, “Officer, based on the evidence, I recommend we send the boy back to the Intelai.”

“Wait a minute,” said Traal. “My boy went there once unsupervised. That’s enough. He’s not going back unless I know you can keep him safe. The Humans sound a lot more dangerous than I thought.”

Officer Pelidor suggested they table that discussion. The sociologist, Drolinvod, who up until then had been taking notes on a small handheld, finally spoke up.

“Let’s look at all the angles,” he said. “What if we find the Human transmat device? Do we really want to release those trapped Humans into our world? Considering what they did to us already, they could cause all kinds of trouble.”

“Come on,” asked Olianol. “It’s a question of degree. Releasing one Human wouldn’t kill us. I assume we could keep him in custody the whole time, right Officer?”

“Can’t promise that, Professor,” he said. “But we can look into it. Meanwhile, why bother? We’re doing fine on our own.”

A series of harrumphs from the expert panel told Pelidor that he held a minority view.

“If we don’t want to become a client of the nearest interstellar empire, we’d better become competitive,” said Jalikny.

“And when I think of the potential benefits for medicine,” said Olianol, “I’d say we have a moral imperative to bring back a few Humans and pump them for all they know.”

“Really?” asked Drolinvod. “What if the Humans we bring back, at great expense, are useless. I doubt everyone of them was a top scientist. We might end up with a handful of shop keepers, or insurance reps.”

From there, the conversation became more rancorous, with insults flying back and forth, until Traal ran up to Pelidor, grabbed the whistle that hung from his broad, scaly neck and blew out three shrill blasts.

“Stop it!” she yelled. “My boy told you everything he knows. Can’t we go home now?”

Pelidor, bent double by Traal’s surprise gesture, pulled her hand away and stood up straight.

“Sorry,” he said. “Kleem’s a nice kid, but he broke the law. I’ll see if I can get the Lieutenant to cut him a break, because he cooperated. Wait here. Meanwhile, Professor, if you want to stay in town, we can see about finding you a hotel. You two, be sure to leave your contact information at the front desk. We’ll keep you posted.”

Kleem watched everyone except his mother file out of the interrogation room. Traal stared at him.

“Happy now?” she asked. “Sounds like that crazy old machine trusted you, though I don’t know why.”

“The Intelai isn’t crazy,” said Kleem. “And anyway, nobody has to worry about the Humans stuck in the transmat buffer.”

“How do you know?” asked Traal.

“I was gonna tell them,” said Kleem, “but they started shouting. The Intelai told me something else: The Humans? They’re on there way back to Helianu now.”