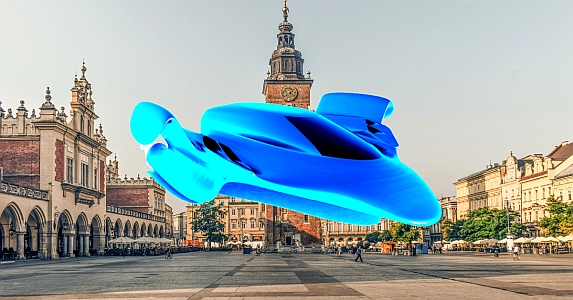 The next morning, the message that Kleem was too intimidated to deliver during his police interrogation arrived in full view of the entire Laltrana Bay Area. A shiny blue Human lander floated down gracefully into Laltrana’s main square, which their ancestors had built centuries before.

A crowd of onlookers, barely contained behind hastily-erected police barricades, craned their scaly or exoplated necks to see the lander’s hatch open in a burst of steam and soft, yellow light. A murmur arose from the crowd as three Humans, two females and a male, dressed in bright-red flight suits, descended the lander’s charcoal gray exit ramp. The male, somewhat alarmingly, cradled a large particle rifle in his muscular arms.

Laltrana’s mayor, flanked by the provincial governor and a representative of the First Citizen’s office, stepped forward to greet them, as nervous police officers, including Pelidor, looked on. What, he wondered, would be asked of him that bright sunny fall day?

Look at them smiling, he thought, like they just got home from vacation.

Mayor Telaxis spoke first. Her green scales contrasted sharply with the Humans’ flight suits, but between her dignified bearing and the severe cut of her jet black dress suit, she looked thoroughly in charge of the situation.

“Welcome visitors,” she said. “I am required to point out, however, that your unannounced arrival is in direct violation of interplanetary law. Regretfully, I must ask you to return to orbit until you have obtained proper clearances from our world government.”

The three Humans glanced at each other as if they hadn’t heard correctly — before doubling over with laughter.

“Interstellar law?” said the taller of the two females. “And who do you think wrote the law? My dear little mayor, the only violation is yours. Your illegal occupation of this world ends now. Return to your work stations and await orders. Your supervisors will arrive shortly. It’s time we brought this renegade world in alignment with protocol.”

Governor Dalinor swept the air in front of him with both hands, palms down.

“We will do nothing of the kind,” he said. “You have been warned. At this moment, weapons are trained on your vessel. I will not hesitate to give the order to destroy it, if you do not comply with the law.”

The male Human sneered and lifted the sites on his particle rifle to eye level.

“Weapons?” he said. A blast of blue energy emerged from the rifle muzzle and incinerated Dalinor in an instant. “Weapons?”

He fired again, this time at the majestic state house at the far end of the town square. It glowed bright red before bursting apart in a storm of shrapnel, broken glass and singed stone. Terrorized, the crowd dispersed as, in the near distance, the wails and screams of everyone who’d been in the vicinity of the state house reached their ears. In their wake was only the mayor, visibly shaken, and the Laltrana police force, eyes downcast to avoid even the appearance of defiance.

Rolthedry, the representative of the First Citizen, choked a bit in the smoke-filled air.

“The First Citizen anticipated your arrival,” he said, “and invites you to join her in the Round House. Please, step this way.”

“Tell that moron to get her scaly little behind to my ship immediately,” she said. “I will not tolerate such insubordination.”

“At once, Your Grace,” said Rolthedry. “Um … excuse me for asking, but should I also summon the Intelai?”

The Humans’ faces went blank. The second female’s voice was laced with fear.

“You … you have an intact Intelai?” she said.

“Why yes,” said Rolthedry, “just up the shallow ridge to our south. Would you like to inspect it yourself?”

“That … won’t be … be necessary at this time,” said the Human. “Just get your idiotic leader over here pronto. We’ll deal with that worthless pile of scrap later.”

Rolthedry bowed and turned on his heels. But before he set off for the Round House, he took out his frustration by barking at the Laltrana Police Commissioner.

“Keep this area clear!” he said. “If that lander sustains a single scratch, I’ll take it out of your hides, personally!”

Pelidor and the rest of the police force watched him stalk off, then stood at full alert at the stern Commissioner’s stern command. In the midst of so much drama, no one noticed the teenage Galorn who’d hidden behind a large blue mail box as soon as all the shouting started. Though rattled to his core by the Human’s terrifying display of military superiority, he’d held his ground.

In the tension that followed, he slipped out of the main square and headed for Laltrana’s back alleys as fast as his insectoid legs would carry him.

“Ask me,” he whispered, “those Humans were scared of the Intelai. Maybe it knows what to do.”

But as he scurried up the rubble leading to the ruins that he’d visited a few days before, he couldn’t help feeling that the quiet life he’d led in the Weldrons would soon come crashing down around his antennae.