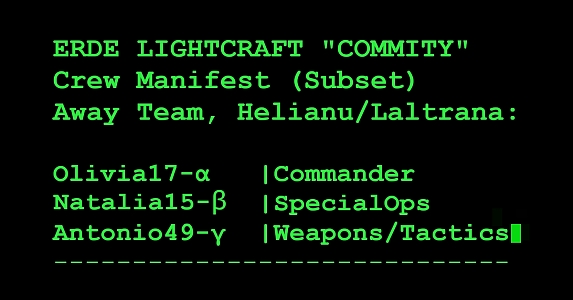 Kleem stared at the Intelai and wondered if he’d heard correctly.

“Yes,” said the ancient android. “You would think of ‘Kleem’ as your name. And as far as your family and friends are concerned, that is how they would see you. But you see, ‘Kleem’ is actually your model number.”

“Model number?” asked Kleem. “You mean, like on a toaster or a ground car?”

The Intelai looked up from the sonic disrupter it was building and stared into the young Galorn’s compound eyes.

“Sadly, yes,” it said. “The Humans who remapped your ancestors’ genomes thought of them as nothing more than functional tools, even though they’d endowed your updated species with sentience.”

As it happened, among the entire Galorn population of Helianu, there were several million Kleems, just as there were the same number of Traals, like his mother. The same thing went for the Helianu. A certain percentage of the population were also Pelidors, like Kleem’s friend on the Laltrana police force.

“You were all genetically designed.” said the Intelai, “to have whatever qualities the Humans felt they needed to maintain their world. That’s how I knew I could trust you. Like all Kleems, you are honest, compassionate, tirelessly curious and precociously intelligent. Not to mention fun-loving, respectful and kind.”

“Forgive me,” said the Intelai. “My aim was only to convey the facts needed to address your question. You must understand that I am not programmed for malice. I simply lack the quality you most likely identify as empathy. However, I believe that the facts do not diminish you in any way. The qualities of mind I listed are all positive, are they not?”

“Interesting question,” said the Intelai. “You see? Your intelligence and curiosity drive you to explore areas others would not. If I had to guess, I’d say that while telepathy is unlikely, you would probably have little trouble anticipating the other Kleem’s actions and, all things being equal, would find him a compatible companion.”

“That’s so … creepy,” said Kleem. “But, hey, we have a bigger problem. I wish the Humans had ‘model numbers’ too, so we could predict what they’d do next.”

The Intelai stopped work on the sonic disrupter and drove his scooter over to a large computer console a good six meters to their right.

“Oh, but of course, they do,” it said. “In their obsessive quest to build a perfect, orderly society, the Humans eventually turned their genetic tools on themselves. By the time they left Helianu, they had created a class of nine Human subspecies, each with its own attributes, all of which were meant to contribute to societal harmony. They almost succeeded.”

Unfortunately, the cityscape of the human mind has many dark alley ways and shadowy side streets. Clever as they were, the Humans couldn’t avoid creating psychological imbalances that were hard to control.

“An uncomfortably large percentage of the population became mentally unstable and needed special care,” said the Intelai. “But the Humans persisted. They who arrived just now are surely their descendants. Let’s check the log files on their ship.”

Kleem watched while the Intelai tapped into the artificial intelligence aboard the Human’s base ship. Despite the android’s earlier comments, Kleem was sure he detected contempt in the Intelai’s voice.

“Such a crude device,” it said. “A child could break through these security protocols. There. I have the crew manifest. You see? Each name on the roster corresponds to a known Human model number.”

Even though Kleem didn’t “see,” he was relieved to know that there might be a better way to get a handle on the unfolding crisis than murdering all the newly arrived Humans. Aside from the ethical issues, the Galorn teenager worried that a massacre would lead to major reprisals from the Humans’ homeworld.

According to the Intelai, all three were aggressive and power hungry, perfect as the leading edge of an invasion force. The trick was to turn those qualities to Kleem’s advantage.

“You’ll have to convince each one,” said the Intelai, “that the other two are plotting against them.”

“We’ll make them kill each other!” said Kleem. “I guess that’s better. What if it doesn’t work?”

“I’ll finish the sonic disrupter just in case,” said the Intelai. “Now. Here are their names. You’d better hurry. From their personality profiles, I’m willing to bet a considerable sum of credits that they are already making life in Laltrana quite miserable.”

Kleem gulped. Somehow, the burden of saving his homeworld had fallen on his narrow shoulders. As he crept back down Laltrana’s southern hills, he couldn’t help wondering how the “Kleem” in the next province over would handle this situation.