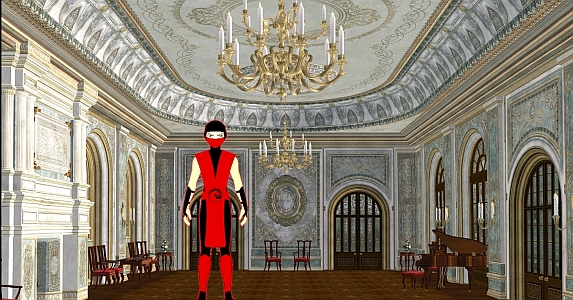 By the time Kleem returned to Laltrana proper in the late afternoon, the normally bustling downtown was nearly empty, except for a few members of the police force. It was as if the entire town were under quarantine.

Did they… make everybody sick? he wondered.

Based on what he’d learned from the Intelai about Human tech, it wasn’t impossible that the newly arrived Humans had released a deadly pathogen. But if their goal was to enslave the entire population of Helianu, killing it would be counterproductive. Suddenly, an angry police officer ran up from behind and grabbed his left shoulder.

“Hey kid,” said the officer. “What’re you doing out after curfew?”

“Sorry, Guess I missed the order,” said Kleem. “Got so scared when the ship landed, I ran away and hid.”

“Yeah?” said the uniformed Helianu. “Well get home now or I’ll give you something new to be scared of.”

Kleem gulped, put his head down and hurried off home. His mother, Traal and Gour, his father, greeting him with tears in their eyes.

“Thought the Humans got you,” said Gour. “Where’ve you been?”

Kleem thought better of admitting that he’d broken the law a second time by visiting the Intelai. He told his parents a story about his hiding place under a loose floorboard in an abandoned house. For better or worse, their attention was elsewhere.

“We’re glad you’re back,” said Traal. “But we still have to report you to the Humans. They made a real fuss when you weren’t here for roll call.”

“We are now,” said Gour. “The Humans have drafted every Galorn and Helianu on this planet into their army. And, well, they want the young people first.”

Kleem’s heart sank. Not only would he have a harder time booting the Humans off his homeworld, he might soon get shot to shreds on some alien planet. But as he saw from the worried expression on his parents’ faces, he knew he’d have to cooperate. No telling what the punishment might be for disobedience.

So after a light dinner, Traal and Gour took Kleem to the Human lander that still rested in the middle of the town square. After passing through three check points, where they were forced to show the pass that a Human servicebot had given them, they reached the shiny blue ship. Kleem’s ears perked up. Was that music playing inside? It almost sounded like the red-suited Humans were having a party. Hands trembling, Gour approached the lander’s securibot and again presented the pass.

After hearing the Intelai’s natural, idiomatic voice simulator, the flat machine voice that rolled out of the securibot’s mouth made Kleem giggle.

The securibot entered a code into a display embedded in its forearm. Soon after, a Human voice rang out from the lander.

“Send in the boy,” said the voice.

Traal glanced at Gour and shrugged, before pushing Kleem in the direction of the landers entry portal.

“Keep your mouth shut,” said Traal. “And do what they say.”

“You are asked to leave,” said the securibot. “The boy will follow me.”

Kleem dared not look back at his parents. He was determined not to cry, just when he needed to focus on how to implement the Intelai’s “combat strategy.” Fortunately, as he entered the spacious lander, he was greeted only by Antonio, whose sarcastic smile was flat-out confusing. The combination of the Human’s expression and the seriously weird music throbbing in the background was disorienting. No less so was the lander’s holographic décor, which resembled an ancient ballroom.

“So,” said Antonio. “Here you are. I wanted to meet the one inhabitant of this town with the backbone to runaway. Though ironically, as an insectoid, you don’t really have a backbone, do you?”

“Oh, that’s so precious,” said Antonio. “You already know your place. We need soldiers who catch on fast.”

The tall Human stared at him quizzically, then outlined their ongoing conflict with the Velradrese, a species of semi-aquatic mammal in the next galaxy.

“Nasty, furry little beasts,” he said, “but I think you’ll agree we have a brilliant tactical plan for their defeat.”

“Nobody,” said Kleem. “I just heard them talking when I ran past them on my way into hiding. Olivia said she was surprised that you knew one end of your pulse rifle from the other.”

“Oh … they must have been joking,” he said. “Anyway, here. These are your orders. Report to the Quartermaster at this address tomorrow at 0600 for your uniform and weapons. Then report to the second address to begin basic training. Dismissed, Soldier!”

Kleem took the slip of paper from the Human, bowed his head and marched out of the lander into the street. It was all he could do not to laugh when, minutes later, the lander’s boisterous music suddenly went dead.