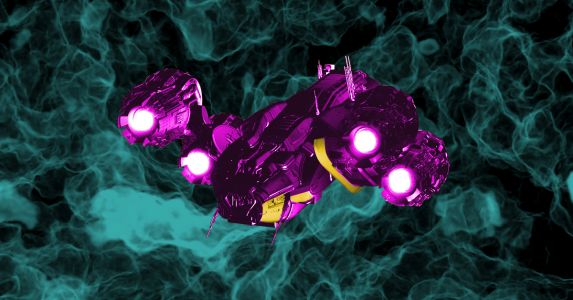 The pilot’s dive into a dark planet’s toxic atmosphere was an act of desperation. A Drolati drone patrol had detected his fighter the second it entered its perimeter and was closing in fast. The Chalthantron cloaking device, which had cost him two month’s pay, had failed miserably. He slammed his helmet visor shut.

Can’t be happening, he thought. Only one chance.

His escape plan made winning the Galactic Lottery look like a sure thing. He couldn’t even verify that Admiral Santori’s base was still standing. Now his AI issued a dire warning.

“Hull pressure increasing,” it said. “Critical tolerance will be exceeded in zero-one-four rote.”

The insectoid pilot/s four hands flew over his command console, to shut down nonessential functions and redirect processing power to his sensor sweep. He had to find Santori’s homing signal before the drone patrol found him — or his ship imploded in the planet’s dense atmosphere.

Where? his mind raged. Maybe it is just a myth.

After all, the idea that Santori’s base had survived a battle that had left this planet a searing hulk of poisonous gas and acidic slime, was as unlikely as wildflowers blooming on a white-hot pulsar. And yet in the midst of disaster, a crystal-clear transmission streamed into the pilot’s helmet.

Frantic, the pilot obeyed, as sensors detected the Drolati drone ships entering the atmosphere, a hundred kilometers above him. But how could a tower beacon reach him through an atmosphere thick enough to smash him into preons? He’d given up hope, when his command console finally lit up.

The pilot shut off the grim countdown and let out a sob. This was it, he decided — until he saw a pale blue glow rising from the planet’s surface with astonishing speed.

“Energy weapon?” he called out.

But the pilot had no time for a sigh of relief, before his main view screen lit up with the image of a female human in full dress uniform. glaring at him.

“Admiral Viola Santori here,” she said. “What the rampaging ion storm are you doing here? Are you trying to give away my position? Talk fast. If I don’t like your answer….”

“Please Admiral,” said the pilot. “This is Halidrak Tralin. I’m a Bolidan fighter pilot with Drolati drones on my tail.”

“Let me guess,” said the admiral. “You thought a cheap Chalthantron cloaking device would fool the Drolati? You Bolidans should have stayed under the human wing. I’d never have let you rely on that dreck.”

“With respect, Admiral,” said Halidrak, “the humans betrayed us.”

“Betrayed me, too,” said Santori. “But we can talk about that later. Shut off your thrusters and let my tractor beam haul you in. Santori out.”

Halidrak clacked his mandibles and did as he was told. A second later, his fighter was momentarily rocked by turbulence in the atmosphere above him. He called out to his AI.

It was too much to ask for, Halidrak reflected. To be saved from certain death by a legendary hero of the decades-long interstellar war was the sort of thing little kids dream about when they play with toy ships. He couldn’t escape the feeling that there was a price to pay for his good fortune.

But for now the simple fact of survival, after hours of dodging a superior opponent, was nothing to sneeze at. As his fighter glided to a halt, he waited for the all clear before popping his cockpit and releasing his seat restraints. He stepped out onto the solid steel of the dome’s landing bay and saw a tall human female marching his way, surrounded by a squad of five android body guards.

When she was within a meter, he extended a hand in a traditional greeting. The admiral responded by knocking him flat on his abdomen.

“You little idiot,” she said. “What the festering boil am I supposed to do with you?’