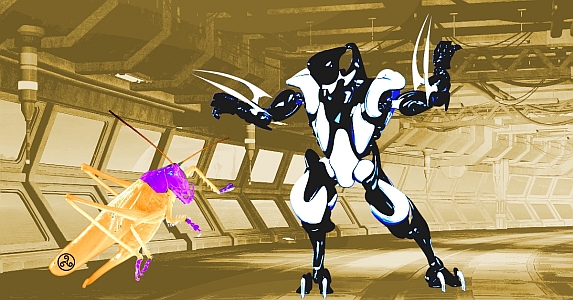 Lieutenant Halidrak Tralin looked up at Admiral Santori from the landing bay floor of her hidden military base.

“Admiral, with permission,” he said. “my back was against the wall. I….”

“Get up Lieutenant,” said Santori. “The fact that I could deck you so easily tells me everything I need to know. Can’t believe you made it through officer’s training. No wonder the Drolati have whipped us so hard.”

His head bowed, the insectoid fighter pilot decided against arguing. Whiny chatter, he realized, would only lower him further in the Admiral’s estimation. Instead, he snapped to attention.

“Knock it off,” said Santori. :You can’t redeem yourself with parade ground routines. You gave away my position to the Drolati, you little twerp. Or did you think that blowing up those drones would keep me safe?” She turned her angular face toward a member of her android bodyguard. “ArtiOne, how long would it take a subspace signal to reach Drolati Prime from here?”

“Adorable, isn’t he?” asked Santori. “So you see, Lieutenant, not only did you not find safe haven here, you’ve doomed my entire post. How can a salute help that?”

“I could … could act as a decoy when they arrive,” said Halidrak. “Draw them away.”

“Those drones were close enough to pick up the entire base on their sensors,” said the Admiral. “By now, the Drolati have already built a scale model of the entire facility. They know our every defense, every escape route and every antimatter torpedo we don’t have left from the war. That leaves one option.”

“What a steaming pile of rancid dark matter you are,” she said. “You obviously think I’ve spent the last five cycles chanting ‘please don’t find me,’ over a string of rosary beads. We are going to evacuate.’

“Pardon my saying so, Admiral,” said Halidrak, “but at the Academy we were told a planet base doesn’t have enough ships to….”

“What ships?” asked Santori. “Like I told you, we’ve been busy. This base is now an assembly of twelve independent cruisers. They’re ready to disengage and go offworld at my command, then reassemble at a designated rendezvous point. We were all set to go when you bumbled in.”

The insectoid pilot was speechless. The next moment, Santori was issuing commands through her comlink to get his fighter locked down and to prepare him a berth in the officer’s wing.

“If you ask me, you belong with the galley crew,” she said. “ArtiTwo, take charge of this idiot, I’ve got to start the pre-countdown inspection.”

Halidrak watched her stalk off with four of her bodyguards and decided his first order of business was to keep from crying. ArtiTwo, a menacing android surfaced in white and cerulean blue, approached him with surprising grace. Halidrak was startled by the smooth, cultured tone of its machine voice.

“Pay no attention to the Admiral’s gruff remarks,” it said. “Like all organics, she is a creature of emotion. The Drolati threat has increased exponentially in the past cycle. You played no part in that.”

“Thanks, I guess,” said Halidrak. “By the way, where’s her crew? I expected this landing bay would be crawling with tech personnel.”

“That, I believe,” said ArtiTwo, “is another source of the Admiral’s agitation. More than seventy percent of the humans on this base did not respond to the vaccine.”

In answer to Halidrak’s startled question, ArtiTwo explained that, before abandoning the sector, the Drolati poisoned the planet’s atmosphere with a deadly pathogen. Despite state-of-the-art medical technology, base physiobots had been unable to craft a universal antidote, for a simple reason.

“It was a machine virus,” said ArtiTwo. “The Drolati embedded it with chameleon circuits triggered by a sensor array. The moment the human immune system approached, the virus disguised itself as ordinary blood cells.”

It was, apparently, only after most of the personnel were dead that the physiobots discovered the chameleon circuits and learned how to deactivate them.

“So rest assured,” said the android, “The Admiral is most likely relieved to have another able-bodied operative on board. I would suggest that you avoid her presence and plug into our direct-to-cortex training modules at your earliest opportunity. You are, as it is said, behind the curve.”

In spite of himself, Halidrak chuckled. As compared to being singed to a crisp by enemy drones, being admonished by a hulking blue and white android was a little slice of heaven.