Episode 3: Static in the Fold 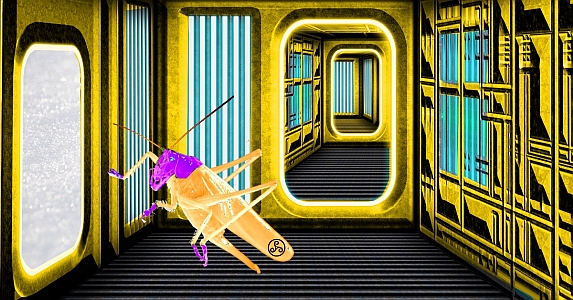 Over the next day and a half, Halidrak Tralin was pressed into service to help with the evacuation. Contrary to Santori’s expectations, there were several engineering problems to overcome before they could leave the poisoned planet that had been their home for too long. .

“Lesson 1, Lieutenant,” Santori had told him. “Never rely on anyone blindly. Fact is no one can see the Big Picture on their own. When a crew member tells me “all systems go,” I’m tempted to toss them in the brig. I don’t run my base on catch phrases, Lieutenant. I run it on facts.”

Halidrak’s lower mandible gaped open, but he kept his own counsel. Would he ever get used to the Admiral’s domineering personality? At the moment, the answer to that question was buried under sheer time pressure. The base’s central AI announced that a Drolati battle cruiser was only a few hundred light years away. Fortunately, Haldirak’s knowledge of Bolidan navigation systems came in handy. As it happened, Bolidan manufacturers had recently incorporated a novel approach to tracking a ship’s position when it came out of fold.

“Saves a quarter rote of recalibration, every time,” he said. “My fighter’s AI has a full set of specs.”

“Look at you,” she said. “Trying to think, for once. Does it make your brain hurt? Tell me why I should trust an untested technology when time is so tight?”

“Not … not untested,” said Halidrak. “I use it all the time. Autopilot my ship with the base AI if you don’t believe me … ma’am.”

“Call me that again and I’ll have your gastor fricasseed in white wine,” said Santori.

Within seconds, she’d hailed her chief engineer and ordered her to test Halidrak’s fighter. That the experiment worked was no surprise to Halidrak. What surprised him was Santori’s reaction — an actual, honest-to-God smile.

“Good work, Tralin,” she told him later. “But don’t count your chickens yet.”

Though Halidrak had no idea what a “chicken” was, he decided to leave well enough alone. With only hours to spare, Santori’s crew replicated the Bolidan navigation system software and incorporated it into all eight sections of the newly subdivided military base. It was now “go time.”

From his station in the weapons array of Section Six, Halidrak watched as the base split into its component parts along a series of titanium rails and lifted off into the planet’s dense atmosphere. There was nothing to do now but hope they could evade detection by the approaching Drolati cruiser.

“Activate chameleon circuits,” said the Admiral, over the comsystem. This time, Halidrak assumed, the ruse should work, as human tech was top-rated. The idea was that each section of the base would disguise itself as a comet. To avoid suspicion, because comets never travel in packs, each section would follow a different trajectory to their eventual rendezvous on Wernher 4. One by one, the “comets’ disappeared into their designated space folds — except Section Six.

Halidrak’s abdomen tightened. Fold static was the lingering dread of every pilot who rode the space lanes. The phrase referred to interference with the ship’s engines from streams of stray protons, snapped loose from cosmic dust in the near vicinity. In the worst cases, the engine’s failed attempt to attain an optimal negative energy field created a temporary micro fold that allowed protons from a parallel universe to seep into the surrounding volume of space-time. The danger of repeated attempts ranged from engine shut down to the creation of a sizable — and fatal — spatiotemporal rift.

When the Section Six AI spotted the Drotali cruiser exiting fold no more than a hundred AU from their coordinates, the captain’s trembling voice made a baleful announcement.

“Hold on to your helmets,” he said. “We’re going for it, static or no. I’m sure you’d rather be blown to quarkdom come than let a Drolati gnaw on your bones.”

Section Six jolted forward and it seemed as if the captain’s risk had paid off. But after a second jolt shook the section’s hull, Halidrak rushed to the nearest space portal to see if he could assess the situation. Trouble was, there was nothing to see. Stretching out in front of him was a featureless void of white nothingness. The silence that had come over the section told him that everyone else was just as stunned as he was. But when the silence finally broke, it did nothing to ease his troubled mind. All at once, a deep voice echoed in his hastily mounted helmet.

“You have transgressed,” it said.