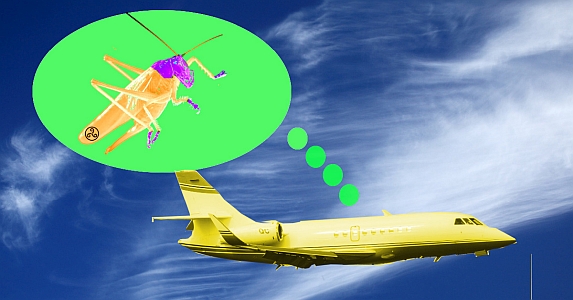 In less time than Halidrak had expected, he was nestled into the first-class cabin of a commercial jet in Earth’s atmosphere. While his cabin was comfortable, Halidrak couldn’t say the same for his new body. Everything about being human required a leap of faith. As long as he allowed himself to trust his new human senses, he managed pretty well. But every so often, his memory of insectoid compound vision made it hard to take in his surroundings.

Part of his problem also involved his lack of familiarity with human social history. It had been hard enough to understand the mindset of the humans, like Admiral Santori, that he’d known in his own time. But at least he could count on a few shared assumptions about the Cosmos. He’d even picked up some of the humans’ curious idiomatic expressions, even if their literal meaning in Bolidan made no sense.

What, for example, did archaic construction tools have to do with the accuracy of a statement? But he’d become inured to humans saying “You hit the nail on the head,” as a complement. He shuddered to think what some of his favorite Bolidan idioms must have sounded like to the humans. Yet, they’d managed to establish a good rapport.

The humans in Earth’s past, however, had only a vague notion of the universe outside their solar system. And small wonder. In the era that Halidrak had been sent to by the subspace overlords, humans space travel consisted of a moon base, two orbital space stations and a few dozen creaky, cramped “space capsules” that ferried scientists to neighboring planets. Worse, as he flipped through the selection of “in-flight movies” available to him on the way to Los Angeles, he was appalled by the humans’ idea of exobiology.

The “aliens” in these holovids were either bloodthirsty megalomaniacs, mindless beasts, or bumbling oafs. No wonder he’d taken to pinching the skin on his left arm to make sure it wasn’t glued on. By the look of things, if one of these humans discovered his true identity, he might never see the light of day again.

The only saving grace was the vivid cache of memories that the subspace overlords had implanted in his remodeled brain. All he had to do was relax and the answer to the most abstruse questions from a human would pop into his mind. That had already served him well when confronted with a confusing array of meal options, a few minutes into his flight.

“I’ll have the chicken,” he’d heard himself say.

At long last, after a couple of panicked encounters with the jet’s cramped rest room, Halidrak heard the pilot announce that the flight was over. Now, he hoped to make quick work of his assignment — even though the idea of changing history felt like a heavy burden. He wasn’t at all sure that an interstellar civilization in which the Bolidans were the dominant players was such a great idea. Did the subspace overlords think his people were less self-centered and careless than the humans? Maybe they weren’t as all-knowing as they seemed.

As he made his way on two legs down the exit corridor and into the airport, Halidrak realized he had no choice. It was either cooperate or see all sentient life in his universe wiped out. Still, a nagging thought plagued him. What if the stern voice that had sent him on this mission had an ulterior motive?

Just up ahead, a group of four humans were waving at him excitedly.

“Doctor Drak!” they shouted. “Over here!”

Yes, he realized, this was his welcoming committee: representatives of a spacecraft company that was founded two centuries earlier by an eccentric engineer. They were the very team of humans Halidrak had been sent to dissuade from finalizing plans for the first space-folding engine.

One of the two females in the group greeted him with a broad smile that he found especially unnerving.

“Hal Drak! I recognize you from your photo on the newsnets,” she said. “I can’t wait to hear your lecture. You’ve taken a very controversial stance!”

She should only know how controversial, thought Halidrak.

“Forgive me,” he said. “But the data is clear. Igniting that monstrosity of yours would rip a hole in local space-time the size of a maglev freight train.”

The words were out of his mouth before he knew it. The subspace overlords had thought of everything. And as he surveyed the glum looks on his hosts’ faces, he realized that his mission was all about squashing the dreams of an entire generation of humans.

I can just see Admiral Santori purse her lips at me, he thought. Is this what I’ve become?