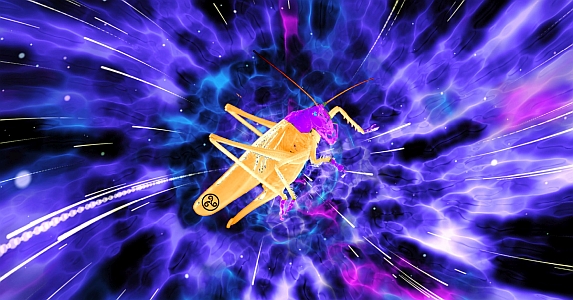 To Halidrak Tralin, the former Bolidan insectoid, it appeared that he’d convinced the would-be human inventors of the space-folding engine to abandon their project. The memories implanted in his mind by the subspace overlords had enabled him to craft a perfect web of detailed half-truths — and throw the original timeline out of whack.

Within a week, news of the project’s shut down reached Halidrak at his hotel room, through a curious remote viewing device. He expected the overlords to return him to his own time, in his own body at any moment. But twelve hours after he’d heard the fateful newscast, he was still human and still on ancient Earth. Furious, he called out in a hoarse whisper.

The deep, self-satisfied laugh that reached his ears was extremely unnerving.

“You poor deluded child,” said a familiar voice. “You know less about the nature of Time than many of your former contemporaries.”

“They’re still my contemporaries,” said Halidrak. “Just zap me back to the future.”

“Which future?” said the voice. “The one that ceased to exist when you altered the timeline with your very convincing lecture? The most we can do is send you to the future that branches out from this point. We doubt you’ll like it.”

In answer to Halidrak’s impatient question, the voice explained that his actions had postponed the development of interstellar travel among the humans and other species for over a century. That had given the Drolati such a commanding head start that, by the time the other species caught up, every major space lane was littered with Drolati check points and toll stations. Short of interstellar war, there was no way to break the stranglehold imposed by tens of thousands of Drolati drone ships.

“You’ve been in on it from this start,” said Halidrak. “What did they offer you to destroy our lives?”

“‘They’ are us,” said the voice. “We are the Drolati. The beings you know are simply our manifestations in your universe. How gullible you are!”

“Why don’t you just relax and check your credit balance?” said the voice. “You’ve been well compensated. Now that you’ve been plucked out of Time, we’ll have many more uses for you. Think of the credits as a retainer.”

The voice went silent and Halidrak’s heart sank — until an obscure piece of data that the subspace overlords had planted in his mind gave him a ray of hope. Unlike the worlds of his time, ancient Earth was still organized into separate political entities, which were loosely defined by cultural or geographical boundaries. That meant Halidrak could take the data and engineering specs that he’d just advised against to another “country.” He could help its scientists develop the first human space-folding engine.

Thanks to the huge retainer he’d just received, Halidrak found a new engineering team on the other side of the planet and funded it lavishly. Within a year, he’d coached their development of a prototype space-folding engine. Working in secret, they went on to build a ship that achieved true interstellar flight. With luck, he told himself, he’d restored the timeline that the subspace overlords had plucked him from. Though his new colleagues were eager to give him full credit at their first official press conference, Halidrak put his foot down.

“Keep my name out of it,” he said, “and I’ll give you an exclusive on my Time-travel device.”

Of course, there was no such device, but Halidrak was playing to a different audience. As he expected, the words no sooner came out of his mouth than he found himself once more onboard Section Six of Admiral Santori’s original military base. While it felt good to be back in his old quarters and in his own body, he wasn’t quite ready to trust his good fortune. Right on cue, the subspace overlords spoke up.

“Oh, very clever,” the stern voice said. “The way we’d reorganized your mind, the probability that you could develop time travel, just by instinct, was uncomfortably high. We couldn’t risk it.”

“Easy come, easy go,” he said. “Now how about leaving me alone?”

“With pleasure,” said the voice. “Watching you adapt to the new future you created will be highly entertaining.”

The next second, a human security detail burst into Halidrak’s quarters, weapons drawn.

“There he is,” shouted the lead officer. “How the blazes did an enemy Bolidan get onto this ship? Never mind, Bug Boy, you’re coming with us.”