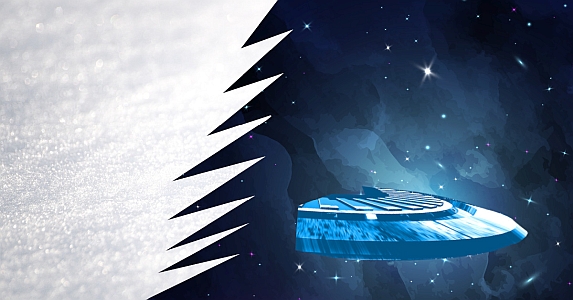 “Enemy?’ he said. “The Bolidan are your allies. Admiral Santori welcomed me here personally.’

“You mean ‘Traitor Santori,’” said the head of the security detail. “She’s the one who sold us out to you Bug Boys. But if you love her so much, you can join her in prison. Prepare a drone ship for launch. We got a live one.”

Before Halidrak could blink his newly reconstituted compound eyes, the security team pinned his four arms behind his back and hustled him down to the launch bay of Section Six. Fifteen minutes later, he was shot out into space inside a tiny drone ship designed for humans.

Can’t even turn around, he thought. What, he wondered, had the subspace overlords done to the timeline?

After eight hours without food, drink or sleep, the former Bolidan fighter pilot felt the drone ship decelerate, change orientation and eventually skid to a halt on a solid surface. The drone’s hatch opened and he was greeted by a trio of chunky servicebots, with mean-looking particle rifles strapped to their shoulders. The tallest one, a bright red monstrosity, barked at him in a crude machine voice.

“You will disembark,” it said.

His body an achy pile of cramped muscles, Halidrak crawled out of the tiny ship and stood stiffly on a dark landing pad

Halidrak followed the three androids around a maze of gray on gray corridors, clearly designed to inspire hopelessness, until they came to a cell with two bunk beds. Halidrak’s tired eyes could barely make out the female human prisoner lying on the bottom bunk. One of the servicebots shoved him into the cell and it was only when it clanked shut that he could see his cellmate clearly.

The woman on the bottom bunk rolled over, sat up and brushed the hair out of her eyes.

“Took you long enough,” she said. “I was expecting you weeks ago.”

“You were?” said Halidrak. “But, you can’t be the same human I spoke to before I left.”

“Of course I am,” she said. “I’ve known about the subspace overlords since the beginning of the Drotali war. They pulled me out of Time and promised me a provincial governorship if I’d throw the war. I said no dice, of course,”

“But they remapped the timeline — twice,” said the insectoid. “How did you survive?”

“Same as you, you dolt,” said Santori. “Once they pull you out of Time, you can never be linked to any particular timeline again. Lucky for you, I meant it, when I said I’ve been busy all these years.”

Halidrak’s lower mandible dropped, as the Admiral explained that she’d driven her scientists to develop a robust temporal shield that would protect the original crew from any maneuvers from the subspace overlords.

“All I needed was to get you back,” she said, “so we could close the Time loop. Now, stand back.”

The Bolidan took two steps back and watched as the Admiral removed two small metal clips from her hair. She held them up to the light streaming into their cell window, pushed them together and pressed the ridge that had formed in their middle.

“Initiate temporal rethread,” she whispered. A moment later, Halidrak felt his field of vision shift toward the blue end of the light spectrum. Soon, the jail cell had vanished and he found himself standing in the corridor of Section Six, where he’d first encountered the stern voice of the subspace overlords. Though the Admiral was nowhere in sight, her voice rang out over the ship’s intercom.

“Captain Wells” she said, “Veer off course to the coordinates I’m transmitting now. No time to explain.”

Halidrak felt a jolt as the ship’s engines made the necessary adjustments and sped off in a new direction.

Must be the only way to avoid the overlords, he told himself.

The ship sped on, created a space fold and … minutes later … emerged unscathed. A half-hour later Captain Wells’ voice sounded over the intercom

“Entering orbit around Wernher 4,” he said.

Though Halidrak was tempted to acknowledge the waves of relief that washed over him, his recent experience had taught him to be skeptical. He ran to the nearest space portal an gazed at a view that looked just a tad too perfect.

“This is another trick, isn’t it?” he whispered.

At once, the view from the portal shifted to an empty void, exactly as before.

“Quite perceptive for a complete idiot,” said a familiar voice. “Now have you learned to behave?”