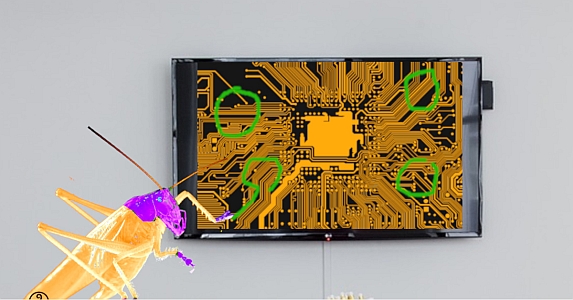 “What now?” asked Halidrak, as the out-of-Time version of Section Six disappeared around him and was replaced by the familiar environs of Bolidan Prime, his homeworld. The subspace overlords replied, as usual in single, resonantvoice.

“New mission,” said the voice. “There are several dangerous trends in Bolidan society we need to correct so we can consolidate the gains you so generously facilitated.”

Though the thought of helping these manipulative monsters made Halidrak’s entire exoskeleton shake, he’d already felt the painful consequences of openly defying them. As it happened, the Bolidans in this version of the timeline were a bit more scientifically advanced than the insectoids he’d grown up with.

They had, in fact, developed a dampening field generator that would suppress any space fold attempted by a Drolati ship. The same generator naturally shielded Bolidan ships from its effect. Without the ability to flee to subspace, Drolati fighters would be “sitting ducks.”

“We’ve already seen how persuasive you are,” said the voice. “Perhaps you even share our repugnance for this brutal weapon of war and can understand why we want to stop its deployment against our brave operatives.”

“Brave,” said Halidrak. “That’s rich. Now that I know that the soldiers I’ve been fighting ever since I entered the service were just a bunch of remote-control puppets, ‘brave’ is the last word I’d use.”

Halidrak’s ears were treated to an ear-splitting roar.

“You know the punishment for defiance, you repulsive creature,” it said.

“Yes, my lords,” said Halidrak and was instantly subjected to a long lecture about how to infiltrate the engineering labs that were developing this new weapon and, as before, talk the hard-working scientists out of running their first combat field test. Halidrak was just about to agree, when a clever thought entered his mind.

“What if I let them keep the weapon but suggested ‘improvements’ that would make it useless?” he asked. “Your enemies would swoop in for the kill and then get out-maneuvered at the last minute as your ships dematerialized and rematerialized directly behind them.”

A chuckle from the subspace overlords told him everything he needed to know.

“Yes, brilliant,” said the voice. “We see you have benefitted from your exposure to a superior species.”

A moment later, Halidrak was whisked halfway across the planet to a top-secret government lab where, he was surprised to be treated with great respect. An enthusiastic young Bolidan scientist approached him the moment he entered and waived him through security.

“Professor Tralin,” said the scientist. “Krilidran Grulorin. I’m so thrilled to meet you. Thank you for agreeing to evaluate our little project on short notice.”

“Don’t give it a thought,” said Halidrak. “It sounds as if you’ve hit on a truly novel solution.”

Krilidran’s enthusiastic chatter continued all the way down a long corridor and throughout a swift elevator ride, but Halidrak barely paid attention.

Have to make this work, he thought, without letting those vultures know I’m tricking them.

What the subspace overlords had again failed to realize, was that Halidrak did not simply have an “independent streak” He was far more intelligent and imaginative than they gave him credit for. By implanting enough knowledge in Halidrak’s mind so that he could develop a convincing argument for rendering the new weapon harmless, they’d also given him and understanding of how to make it more deadly.

After listening to the Bolidan engineers explain both their theory of space fold field disruption and its application, Halidrak stepped up to a holographic display of the field generator’s wiring diagram and circled a few areas with a stylus.

Though the assembled engineers and physicists listened with rapt attention, they gasped as Halidrak detailed his proposed modifications. Krilidran leapt out of his chair and was about to speak.

“But Professor,” he said.

“Please,” said Halidrak. “These modifications are top-secret and come with the highest authority from Central Command. The less we speak of them the better. The walls have ears, as the humans say.”

“So many stupid expressions,” said Krilidran.

Nevertheless, the Bolidan team set to work at once and, within a month, had built a new prototype. Excited, they rushed to install it in a drone fighter and aim the fighter at a Drolati ship engaged in battle. Back on Bolidan, Halidrak monitored the test flight on a large view screen to see it disable a Drolati fighter — and deliver a deadly surprise package.

“AIEEE!” screamed the subspace overlords in his mind. “You’ve turned that weapon on us!”

Not bad for a complete idiot, Halidrak replied. eh, my lords?