Episode 9: Lording it Over Them? 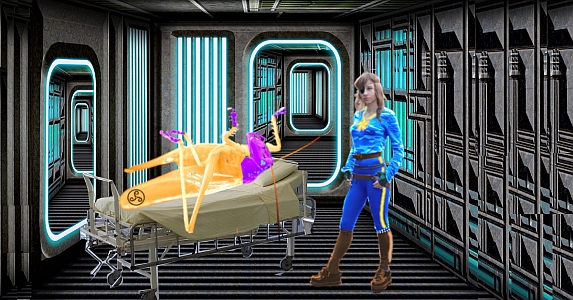 The subspace overlords were not amused.

“Do you know whom you’re playing with?” they asked.

“Arrogant idiots who overestimate their control of the timeline?” asked Halidrak.

“Why do you think we won’t kill you for your impudence?” said the overlords.

“Because you haven’t,” said Halidrak. “You need me to carry out your ‘master plan.’ Now come clean. Tell me what you’re really after? Or kill me. Compared to what I’ve been through lately, I doubt death would be much worse.”

“What if your death were slow and painful?” asked the overlords.

“You got me there,” said Halidrak. “So what’s stopping you? Don’t tell me the subspace overlords have … overlords?”

Halidrak reveled in their silence.

“We have yet to … justify … our actions,” said the overlords

“That’s gonna be tough,” said Halidrak. “Besides, you rule all of subspace, so why do you care what we do in our spare time? What would you get out of ruling us?”

“Mind control,” said the overlords. “There are billions of sentient minds in your universe that waste their mental energy on trivia, frivolity, desire, yearning, grief and regret. It’s appalling! If we could harness that energy, we could remake the universe!”

“Into a paradise for you and slavery for everyone else,” said Halidrak “That doesn’t seem fair.”

“But our ideals are pure!” said the overlords.

“Give me a break.” said Halidrak. “Instead of controlling us, why don’t you teach us a better way? You don’t really think we’re happy with our obsessive thoughts, do you? But it’s all we know. So tell me. How could I use my mind more efficiently, appropriately, productively or … whatevertively?”

“If we did,” said the overlords, “could you pass it on to the others?”

“I think so,” he said. “But I’d need a state-of-the-art ship, a dedicated staff and crew, an unlimited credit account and freedom from disease, aging and loneliness.”

“We might almost think you had ulterior motives,” said the overlords.

“So find yourself another guru,” said Halidrak. “But you won’t find anyone with less to lose. You’ve taken everything from me. I should be leading a normal life on Admiral Santori’s new military base — where I might have met a nice Bolidan female and settled down. Instead, I’m offering to gad about the universe, doing your dirty work.”

“Interesting,” said the overlords. “In fact, there is still a version of the timeline in which that is exactly what occurs. Would you prefer to live there?” “Only if you left me alone,” said Halidrak. “I don’t want to feel that I’m just about to be pulled out of Time for one of your dumb missions.”

After a long silence, the voice of the subspace overlords rang out again.

“We have considered your proposal,” said the voice, “and chosen a different path. You will be restored to your original timeline. We will instill the ‘lessons’ we need sentient organics to learn a little at a time through indirect manipulation of events. What we require is too much to expect from a mind still so steeped in animalistic desires.”

The next moment, Halidrak’s vision clouded and he drifted into a deep sleep, only to awaken in the Sick Bay of a familiar human military base. With a strange mix of joy and dread, he now heard Admiral Santori calling out to him.

“So, Tralin,” she said. “You’ve finally decided to join us. Diddums have a rough journey? Great steaming gobs of gluon stew, you’re pathetic. Everyone else made it here in fine shape.”

“Yes, Admiral,” said the Bolidan. “I probably tripped on a bulkhead on my way to my acceleration chair when we entered orbit.”

“Well from the nonsense you’ve been spouting in your sleep, I think you were tripping on something. But never mind. Captain Wells tells me you were invaluable in getting the Section back on course after it hit an ion storm. Good work.”

“Thank you Admiral,” he said.

“Hurry up and recuperate,” said Santori. “We have new recruits to train. Now that I’ve promoted you to Lieutenant Colonel, you’ll be in charge of the entire Bolidan force. Ah, here’s Lieutenant Frelidnar now.

Halidrak’s heart pounded as a beautiful Bolidan female walked timidly up to his hospital bed.

“Nice to see you up and about, Colonel,” she said.

So it was that a hapless encounter with destiny led an otherwise unremarkable soldier into a bright future — his only talent being an unwillingness to despair in the face of danger.