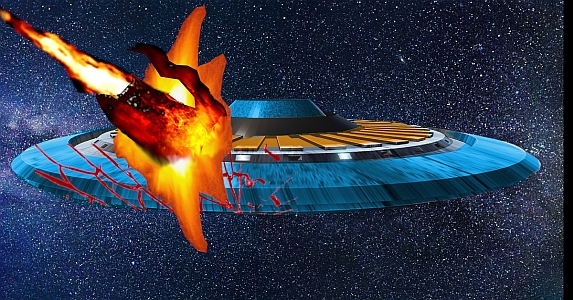 I’ll bet some of you are skeptical. I mean, what has it been — a hundred and twenty cycles since the Still Waters was shot to Hell by the Woldadrians? Let me set you straight: Back then, we had longevity treatments that would seem like magic today. I managed to save up enough doses to get me this far, but now I’ve run out.

That’s why I look like a sack of edible tubers that’s been sitting in the sun too long. I never studied medicine, but I think I should have around another fifteen cycles before the end. It’s sad, really, I was hoping to see the day when our people regained the ground we lost. But that can’t happen now, without a revolution. Because once the Ulbantri “rescued” us from the Woldadrians, they made sure we never had more tech than necessary to make our upkeep affordable. For instance, instead of managing a vast interstellar hospital system, they trained the locals and supplied them with medroids to handle the complex stuff.

At first, the Ulbantri had their work cut out for them. The Woldadrians had destroyed everything and there were billions of infected humans to round up. So it was several cycles before Reconstruction got started. Then the Ulbantri moved in fast. To start construction on the shell of a hospital, municipal complex, a road system or whatever, they used automated platforms to extrude the materials out of the surrounding environment. Soon after, they transmatted in a prefab suite of wiring, heating, plumbing, circuitry and so on. If the local power grid was weak, they had fixes for that, too. This happened before you were born, so you take it for granted. But it’s why the décor in official buildings is so bright. The Ulbantri can’t get it through their pointy skulls that we don’t see the infrared spectrum.

After the infrastructure was in place, the aliens built the limited “perpetual care” system you live in now, Ever wonder why only a few dozen kids ever get to take advanced Engineering courses — or go to University at all? You’re human. You have a station in life. Society is geared toward keeping you happy, distracted and thoughtless. You even have full employment.

Billions of empowered employees crank out trillions of “work units” a week, without realizing that each one is overwritten by Ulbantri artificial intelligence. All the Ulbantri ask in return is to syphon off a few hundred thousand humans a year for their own pleasure from each world they colonize. Really? What do you think happens at those “re-education retreats?”

Sure, don’t believe me. You’re the one who asked me what my story was, right? So let me get back to it.

As I was saying, Xoltryndney and I lived in our own private paradise in the Diapente Sector. We laughed so hard sometimes, I thought my gut would split open. And the habitat ring itself was a thing of beauty. The artificial landscaping, which dovetailed perfectly with the carefully crafted holographic backgrounds made the ring look like images I’ve seen of Earth before civilization wrecked it. The climate control was perfect and predictable. On certain days, we could lie together naked on soft grass in the shade of a willow tree and feel the warmth of “the sun” on our skin.

We used to read to each other from the classics at those moments. And if you believe that, I have a spaceport in the Ligature system to sell you.

Anyway, combined with the habitat’s state-of-the-art replicators, which could produce meals hearty enough for a sweaty cargo crew or delicate enough for a romantic dinner, the environment was the very definition of “Heavenly.” Now, maybe you don’t see how this was enough for us — all alone, away from the stimulus of a dynamic culture. But based on the little bit of news that reached us over the fragmented newsnets, the main “stimulus” at that time was watching your family and your neighbors’ families get vaporized or loaded up with Woldadrian eggs. What it must have been like to see their larvae bursting out of your loved ones….

So, I guess you could say we were high on survival. But there were other factors. First, as I said, life with an Alcastrian empath means never getting into those pissy little fights about “what you said” vs “what you meant.” Xoltryndney always knew what I meant, and after a year of living in close quarters, her empathic powers kind of rubbed off on me. The other thing was the habitat’s holodeck database. It was chockfull of personality vectors we could link to holographic avatars. That way, we could enjoy the company of thousands of friends whenever we wanted.

Yeah, you obviously think I’m kidding myself, but that’s only because you’ve never seen what a true AI simulation can achieve, especially when encased in the right kind of emag field. Never mind. My only point is that we were blissfully happy until the day a huge chunk of debris from a space battle light years away finally rammed into the habitat’s starboard hull. Everything went downhill from there.