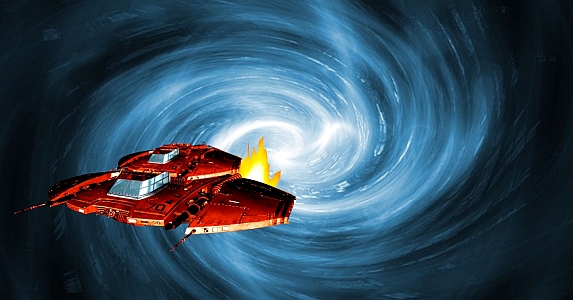 The second that ship’s debris hit our habitat we were on the clock to escape. The only saving grace was that every bay in the ring was functionally independent. Immediately on impact, the affected sectors were sealed off so the rest of the habitat could maintain life-support. Trouble was, the damage was so extensive, we only had backup power, air and water for six hours. And that was provided that no aftershocks reached our other primary circuits.

We grabbed everything we could think of, starting with the two ready bags, each, that every spacefaring sentient has packed since the dawn of deep space travel. No matter how advanced you think you are, the infinity of the Cosmos can always dish up a body blow of unexpected bad luck. It was our turn to prove that point and we wasted no time cramming as much as possible into the larger of the habitat ring’s two probe ships. It was already well equipped but I was determined not to leave my rare gem collection behind.

That wasn’t just a sentimental attachment thing. I figured that no matter what kind of patchwork economy might exist after the dust settled, I could get a fair amount of credits from selling those beauties. I also ordered our two servicebots to round up whatever medical equipment and supplies were missing from the probe ship and transmat them over — including our resident medbot.

Meanwhile, Xoltryndney scrambled to gather up her art collection, stored on hundreds of data cylinders and including her own works. She had stills, holo environments, vids and biomass sculptures of a kind that were controversial on Earth. At first, she was fairly complacent about the situation, because she’d already uploaded everything to COSNET. Then I reminded her that COSNET was probably not going to survive the year, if it wasn’t down already. That shook her. It was all I could do to get her to think about any other essentials we might need. With both of us frantic, we left it to the habitat’s AI, NineAhrVee, to take inventory and send over anything critical we might need.

By the time we left, we’d filled up both probe ships and simply docked them. As soon as possible, we set out in our bizarre mushroom-shaped renegade vessel as fast as possible, for the opposite “end” of the universe from the main civilized hub defined by Common Space. Because we were already so far out to begin with, we figured we had at least a chance of outrunning the Woldadrians’ rolling disaster parade. And, of course, the definition of “infinity” being what it is, we had every reason to believe that we’d reach a safe zone sooner or later, as long as we kept moving.

But our first hurdle was getting as far away from the habitat ring as possible before it finally blew. As it happened, we managed to leave normal space only a second after that massive explosion began. And though we missed the worst of it, a bit of the habitat’s hull did manage to nick us just as we entered subspace. So we came out of fold a thousand lightyears away, but with a hole in our aft cargo bay the size of a small asteroid. There went my gem collection and a good half of our replicator stock before the probe ship’s sealants and auto repair made us whole again.

There was nothing for it but to find a friendly space station, but we dared not even send out a search signal for fear of being identified. Who knew how far Waldadrian sensors reached and what trouble they could cause by threatening the local authorities? Fortunately, Xoltryndney had a family connection to an Aldastrian scavenger ring that used a proprietary com network. It was the most secure means of communication ever built, largely because it operated on a frequency modulated by a pseudorandom fluctuation of Gamma rays. You either knew the algorithm they used or you didn’t. There was no guessing its passcodes

So after a few hours of cajoling her Aunt Yanchurckey, she got us a berth in a top-of-the-line repair shop on the far side of the seventh moon orbiting a gas giant in the Rhuhelby system. Later, I found out that most of the cajoling involved convincing “Auntie” to allow a dirty human to enter her premises.

You see? some things never change — though I would have thought that everything you’ve been through with the Ulbantri would have taught you one thing. The only way to make it in this cracked-up, heartless universe is together. Can’t believe I even have to say that. Sure, I see you nodding, but promise me this: Listen to yourselves at the next holiday dinner and see how much of the conversation revolves around what “they” did and how skeevy “they” are.

But never mind, I have no call to judge anybody after what I did to survive. And looking back, I still can’t quite admit how soon my so-called “ethical standards” broke up into little tiny pieces under the pressure to save my skin.