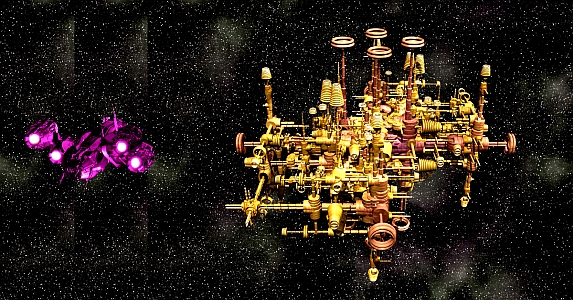 Once we got past the objections of Xoltryndney’s aunt, Yanchurckey, and docked our damaged ship into the repair bay of the scavenger’s space station, our problems turned from technical to financial. Life being what it is, there’s no such thing as “a little bad luck.” The entire rear end of our ship’s main module was a gigantic paperweight. The repair work required was extensive and expensive.

As I expected, the Waldadrian assault on Common Space had reduced the human financial system to a tangled mass of corrupted data. In the few sectors of the human sphere that were still operational, inflation had wiped out the value of whatever accounts were still in tact. A few lucky devils did have significant holdings in commodities, but I’m sure most of that was paid out in bribes for favorable treatment.

That was how I’d hoped to scrape by with my rare gem collection, which our last minute accident had utterly pulverized. As a consequence, Aunt Yanchurckey held out only two payment options, which she made a point of telling me were a special favor to Xoltryndney.

I’ll tell you, you haven’t lived until you’ve seen an Alcastrian’s lateral tentacles flare up bright red when they get riled up enough. Anyway, I got the message. My first option was to turn my ship over to the scavengers and lease it back from them — payable in free labor, for which I’d also get room and board. My other way out was to run a dangerous mining mission in the Drolat asteroid belt, a scant two-hundred-thousand kilometers from the Salamander event horizon.

But the event horizon was only one of my problems. The Drolat had received Protected Resource Status from the Interspecies Spatiotemporal Duma, which meant it was off-limits to miners. My one dismal hope, was that the Waldadrian invasion was too much of a distraction to allow any diversion of security forces for police actions. Sad to say, I was right.

On top of that, Aunt Yanchurckey had wrangled me a first-rate mining vessel, complete with the latest automated excavation tools. Technically, I didn’t need to leave the ship, but after years of ship-bound life, the urge to get out and explore was irresistible. And despite the androids’ superb scanning capabilities, I managed to identify the most likely coordinates for rich deposits of rare ores, based on the asteroid’s topography. The scavengers, it turned out, were looking for yttrium, praseodymium, gadolinium and a few of the other substances that used to be called “rare Earth metals.” I’d seen it all a thousand times before.

The entire belt was lousy with the stuff and that was a good thing. The scavengers needed them all for their ongoing repair work. In one trip, I could pay off our repair debt and have enough left over to set up a crypto currency account of our own. Then at least we’d have standing within the confines of the scavenger network. So after a week of pushing my equipment and myself to the max, I set off to Aunt Yanchurckey’s makeshift space station with a light heart. We were going to make it. We were going to….

What I found when I arrived changed my tune completely. The space station was abandoned. Our probe ships and, more to the point, Xoltryndney, were gone. My mind reeling, I docked with the station, donned a pressure suit, and walked in to the command bay. Though I’d hoped to find a message from my lovely Alcastrian girlfriend, there was nothing on all seven decks of the station but emptiness and silence. The scavengers had even ripped up the carpeting. Heartbroken and scared out of my mind, I still managed to discover a replicator reservoir and a water tank to supplement my onboard supplies. But that was it.

Back on the mining ship, I tuned into whatever was broadcasting over the newsnets and came up with static, for the most part. There was, however, one station still transmitting from the Cambiata sector, which, according to the newsreader, the Waldadrians had bypassed. It didn’t take long to figure out why. The dominate species in that sector, the Gelhadrek, were one of the few whose bodies had a natural defense against Waldadrian infestation.

Waldadrian egg sacs dissolved on contact with the Gelhadreks’ highly acidic blood, which was also home to the most virulent immune system in the known universe. To look at the rounded, pastel-colored insectoids, you’d think butter wouldn’t melt in their mouths. But they were also fierce fighters with a warrior tradition that, by comparison, made the average Common Space battalion look like a collection of Teddy bears in a holiday window.

With no other bright ideas, I headed straight for the Cambiata sector as fast as possible. To cover my tracks, I told my nav-AI to pop out of fold and reset its signal array every thirty-five light years. That way, in case there was anyone left to care, I’d be harder to track.

By the time I arrived in Gelhadrek space, I was just about out of supplies, but I felt safe. Of course, that’s when the gluons really hit the collider.