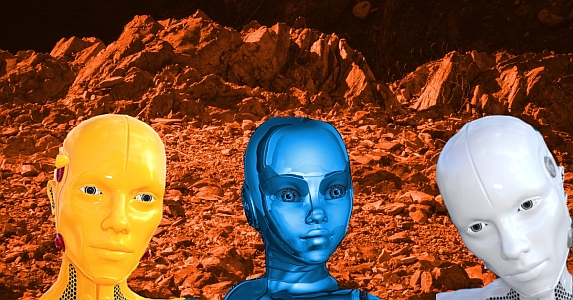 At first, it seemed as if the Gelhadreks were happy enough to take me in. I had no trouble obtaining a landing code from the control tower at Nolcadrehan, the planetary capital, and the customs process was fairly standard. I parked my mining ship in the designated berth. While it was disinfected, a bevy of servicebots and android inspectors combed it from top to bottom.

Naturally, they found the ore from my illegal mining expedition immediately. I’d been too distraught by losing Xoltryndney to ditch my contraband before heading out from the scavengers’ space station. Worse, my ship was contraband, too. Xoltryndney’s family had harvested it from a mining expedition in the Apishot Sector that had gone dark temporarily, due to a viral outbreak.

With two strikes against me, I figured I was heading for interstellar prison. What saved me, ironically, was the Waldadrian invasion. Their assault had been so brutal that, practically speaking, there was no interstellar government left to run such a prison. Besides, skilled workers like me were in now high demand. Everyone realized it would likely be a hundred cycles before professional training academies could open again.

So after confiscating my only assets, namely the ship and the minerals, the Gelhadreks put me to work on a remote asteroid belt two systems over from their homeworld. Maybe it has something to do with the basic structure of the insectoid brain, but I can’t deny that their every decision was supremely logical. That is, though they’d identified me as a criminal, I was afforded all the comforts of an employee of a large firm. I was assigned to cheerful, private living quarters with plenty of food, available by replicator in a quaintly designated “Humanoid Hall.”

As it turned out, a fair number of humans and related species who were vulnerable to Waldadrian infestation, had also sought shelter with the Gelhadreks. In my residential complex alone, there were two or three dozen of us, including several operatives who could trace their ancestries back to Earth itself. At that point in my life I was still in my early thirties, so it shouldn’t surprise you that I was drawn to one of the women working in my unit.

Her name was Lamda. I later learned that was the nickname her mother, a particle physicist, had given her due to her long, wavy hair. I never did find out her real name, but at the time, desperate as every survivor was for someone to cling to, I didn’t ask. But I’m getting a head of myself. At first Lamda barely acknowledged my existence, apart from the bare minimum of business-like interactions required to discover, drill and lade a shipment of ore. There were pressures to calculate, sonic charges to set, drones to deploy and androids to keep on track.

That’s an aspect of life I’m sure none of you can appreciate. You only know androids from that spate of fantasy videos that cropped up not that long after the Ulbantri took over. You think androids are a maximally efficient, docile workforce who carry out orders with insight, independence and, when necessary, self-sacrifice.

Well, that’s just wrong. In my day, if you didn’t keep your eye on your android team, you’d find it huddled in a corner, debating scientific theory or arguing over the most cost-effective extraction protocols. That’s if you were lucky, and the androids were staying on topic. Otherwise you might find an untended android pondering “The Sociometrics of Human Personality Development on an Isolated Lunar Colony.”

They were, in a word, too smart. Their intellect enabled them to see the Interconnectedness of All Things, as they put it. Now that’s fascinating in a way, but incompatible with getting anything done in the real world. And the Gelhadreks, for all their apparent compassion, demanded results. As it turned out, this peculiarity of the android mentality gave me my first opportunity to make Lamda smile.

In the middle of a grueling shift, when we were under the gun to deliver two hundred metric tons of galenite, a dozen or so androids got locked into a debate about the risks of transmatting that much ore across space. The argument started when one of the Gelhadrek space-folding transports started leaking radiation and it looked as if we wouldn’t meet quota. I found Lamda arguing with them about sticking to protocol, but she was getting nowhere fast. That’s where I saw my opportunity to shine

“Hey fellas!” I said. “You wanna knock it off and get back to work? Or are you just too stupid to initialize self-repair on that transport? Neutrinos in a twist, I bet you don’t even know where the temporary rad shields are, do you? Guess I’ll have to ask a servicebot to handle it.”

The next second, the androids were scrambling all over themselves, issuing commands to our automated repair platforms and divvying up assignments based on specialization. It was like a scene out of a comedy-vid I’d watched as a child and the look on Lamda’s face, through her visor, told me she had the same thought.

“Nice work,” she said. “Think maybe you could turn that line on the Gelhadreks and get us some decent Scotch?”