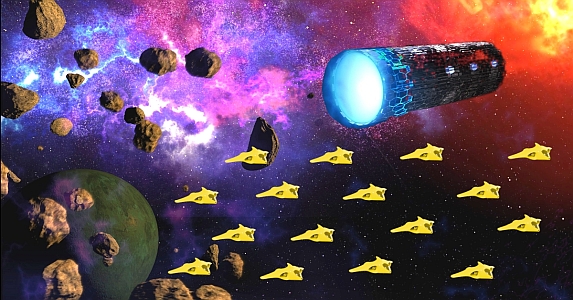 Though the workload was grueling, I soldiered on at the Gelhadreks mining camp for a simple reason. Given the choice between survival and decimation by a blood-sucking alien, there’s a lot I’ll endure. Besides. the food and my quarters, which included a state-of-the-art entertainment center, were superb. I even had every eighth day off.

Naturally, the odds that Lamda’s day off and mine would correspond were higher than a Halpaxtrian mastodon’s left shoulder. But that was for the best. After our “meet cute” moment with the androids, she showed not a hint of interest in me. I like to tell myself that the inherent danger of the intergalactic situation made her wary of getting close to anyone. Who knew what sweetheart she might have watched die before throwing her lot in with our mandible-champing masters?

Despite that, I looked forward to seeing her at the top of the morning shift. That’s what made The Incident so disturbing. One routine afternoon, about three months into my life with the Gelhadreks, I came off my lunch break to see Lamda and about fifteen other miners being herded into an ominous, dark red space transport. The Gelhadrek guard detail was heavy around the asteroid’s launch pad, so I dared not even clear my throat, let alone ask questions. The most I could do was turn up the gain on my helmet’s transmitter to pick up a few words of the guards’ conversation.

“Jenkoarek, jenkoarek,” a few of them growled, over and over again. As a slang word, it glided past my suit’s translation grid. But it was part of the smattering of Gelhadrek I’d picked up in conversation with the rest of the human crew. It meant something like “conspirator,” or “criminal” or “revolutionary,” but had other connotations that were on the crude side of disgusting. Later that night over the evening meal, I learned that Lamda and the others had plotted to steal a cargo ship and take off for deep space when the Gelhadrek entered their seasonal hibernation period.

But Lamda and the others were just smart enough to be stupid. This branch of the Gelhadrek family had used advanced gene-editing techniques to weed the hibernation imperative out of their genome. The conspirators were shocked to find their plan thwarted by a full battalion of totally alert insectoids, their exoskeletons reinforced with blast-resistant shielding. I wanted to catch Lamda’s eye as she was shoved into the transport, but I’m sure the terror on her face would have haunted me to this day.

Soon enough, The Incident was past, but its impact on the rest of us was severe. Each work shift was monitored by a military guard and AI surveillance team. Every single thing went strictly according to protocol. I couldn’t even bring a bookvid to read with my lunch and that was a shame. Moons of Dameron was a perfect tale to get lost in, especially on days when my Gelhadrek supervisor was spoiling for a fight. But I wasn’t the only one who chafed under the new regime. In the end, the climate of suspicion and fear wrecked worker morale. Our productivity fell so far that the Gelhadreks decided to shut down the entire operation and bring in fresh personnel.

It was, to coin a phrase, “a mixed damnation.” We were free, but at what cost? Like the others, I was cast out into deep space with no more than a week’s rations and a small escape pod. We were told to aim for the Deltjor system, where, it was said. the last survivors of an ancient civilization were still hold up. I didn’t like the sound of that. Either the Deltjorans were mythical creatures or they were so indifferent to the plight of others that they’d done nothing to stop the Waldadrian parasites. Yet here again, for the fourth time since the Still Waters Down was destroyed, I was forced to take my chances on a long shot.

Some of the others decided to ignore the Gelhadreks’ suggestion and try to bargain passage on a huge automated freighter that had just entered the insectoid’s solar system. At first, it seemed as if they might have had a good idea. From the staticky transmissions I picked up, the freighter’s AI seemed to welcome them in a spirit of cooperation against the Waldadrians.

Still, I was wary. An AIs promises were always subject to the “efficiencies” of the moment. It was only years later, after the Ulbantri took over everything, that the truth came out. The poor slobs who’d docked their pods with the freighter were swept up by its machinery. Within minutes, their central nervous systems had been plugged into the freighter’s AI, augmenting its mental capacity with their own bioenergy. It was a type of cannibalism the idealistic developers of the first artificial minds had never dreamed of.

Though I fared better, my encounter with the Deltjorans was a series of surreal out of body experiences that still invade my dreams. And to think how innocently it started, with a single cup of Durglassian tea.