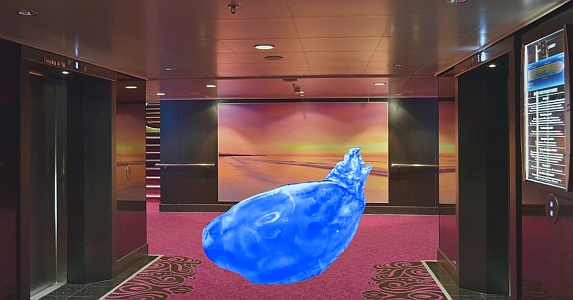 Once I’d cast my lot with the Deltjorans, I never looked back. There was simply no reason to believe that striking out on my own at random would yield any better result than continuing along the equally random chain of events that led me to one of their interstellar transports. Though part of me desperately clung to the idea that I might find Xoltryndney again and have some hope of resuming my old life, I knew it was a foolish dream. Even if I continued to believe that Xoltryndney had been forced to abandon me by her family, I had to assume that the pressure on her to reject me a second time would have been too great for her to resist.

That was aside, of course, from the risk of darting around open space on my own, with the Waldadrians still on a rampage. And rampage they did. Even during the day-and-a-half I spent in a Gelhadrek escape pod, the news I picked up on the pod’s limited transceiver was grim. There were now more worlds in Common Space that had ben infected by the parasites than had not. The human race, and a wide swath of the other sentient species we’d dealt with over the past thousand cycles were doomed.

Imagine then my surprise at the mood of unflappable, ethereal calm aboard that Deltjoran transport. From the moment I docked my pod, I experienced a sense of calm unlike anything I’d ever known. Quarks in a box, I barely remembered my name for the first few cycles I was among those strange, rubbery creatures. Yet as comforted as I was, it took some time to adjust to my new home.

Though Deltjorans weren’t true shape shifters, their bodies were eerily elastic. If the Deltjorans needed an object on the opposite side of a room, they could extend a part of their shimmering, pale blue mass up to, I’d say, three meters in its direction. And they could adapt any appendage they “grew” to the needs of the moment. Only in delicate, high tech environments would they rely on tools. Otherwise, they called up simple devices, like screw drivers, knives or scissors on the spot from their own anatomy. Running in parallel to their flexibility was their ability to change the density of their outer layers as needed. Hard as steel one moment, a Deltjoran’s outer surface could flow like water, if necessary, the next.

As strange and unsettling as their appearance and physiognomy were, the sense of well-being I felt in their company continued to grow. This was partly because they were so generous with their time. Despite running what appeared to be a busy interstellar transport, which was engaged in an important mission, an “Acclimation Counselor” named Ploliash met with me every afternoon, about two hours after my mid-day meal. If the Deljorans ate, you’d never have known it, but I and the other refugees from the Gelhadrek miming operation were more than well fed. Over time, I saw more and more of my favorite dishes turning up on the electronic menu in the “Guest Dining Hall.”

That made me wonder if the Deltjorans were telepathic, but it turned out that my counselor had somehow deduced my preferences from our casual conversations, which took place, usually over a pot of Durglassian tea. In any case, after a few sessions, I couldn’t help asking Ploliash if the Deltjorans were concerned about the growing Waldadrian menace.

“Who?” asked my host. “Oh yes, the voracious ones. Don’t trouble yourself. We encountered their ancestors hundreds of cycles ago. They know better than to disturb us.”

“You have superior weaponry,” I said, as if it were understood. Ploliash chuckled.

“There is more to space and time than direct confrontation,” he said. “As it happens, what the Waldadrians learned is there is no possibility of any interface between their breeding system and our manifestation in this universe. “

“Though I feel no obligation to ‘explain myself’ to use one of your curious expressions,” he said, “you may as well know that what you perceive as ‘me’ is not the whole picture. In fact, the Deljorans were a multidimensional species. What I’d seen so far was merely the part of them that extended into this universe.

“We are no more ‘here’,” he said, “than we are at any the other places we may be observed. At this moment, for example, another part of ‘me’ is having a lovely conversation with a Saldrassian sea mammal from a hundred cycles in your past.”

Ever since that conversation, I’ve tried to picture what that kind of existence would be like, but, well, there aren’t even words for it. And yet, even that perplexing thought wasn’t enough to disturb the sense of peace I felt. Not long after that, Ploliash told me my acclimation period was over and that I would soon embark on a special course of training, in “the Art of Forgetting.” And though a small corner of my mind voiced a note of caution, I swept it aside. Surely, I thought, the mysteries of the universe were about to open up to me.