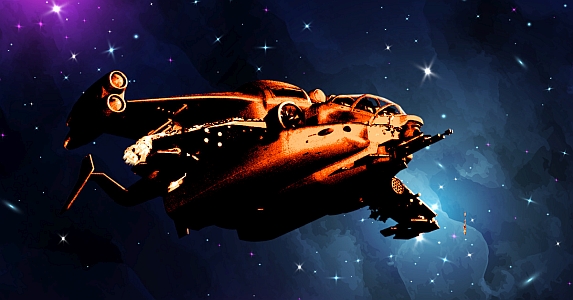 Once my mind was connected to the Deltjorans’ galaxy-spanning mentallic network, my perception of space and time was radically altered. In hindsight, it was nearly fifty cycles before the Deltjorans met any opposition. At first, our mission went smoothly. We exerted influence on life forms from dozens of worlds. In some cases, we merely shaped the development of an existing civilization. In others, we actually guided the course of evolution. The Deltjorans had a specific model of sentient society that they sought to duplicate across the entire universe.

While their model contained admirable ethical values, it was a bit on the bland side. Besides, any society that fit comfortably in this mold was very easy for the Deltjorans to control. In the end, whatever benefits the Deljorans brought to “their” peoples had the sinister purpose of making them unlikely to think for themselves. By training and genetic inheritance, species under Deltjoran influence effectively locked themselves into their own gilded cages.

It was a perfect scheme for cosmic domination and would have eventually made the Deltjorans masters of all. That is, except that “all,” in universal terms, is infinitely more variegated than the most brilliant mind can grasp. Inevitably, then, the Aldevari, a species of sentient avians, appeared at the edge of our collective consciousness, resistant to our every mentallic gambit. You see, our most basic maneuver was to scan a new species dominant cultural artifacts to capture the “message architecture” of their cherished belief systems.

We then used this underlying vocabulary — including their assumptions about the purpose of sentient life — to snare them into a logical trap. Once we were through with our victims, they were forced to admit that the basis for their society was so flawed that they could only redeem themselves through our beneficent “guidance.” When palaver alone didn’t work fast enough, we caused a series of natural disasters. These served to underscore our victims’ inability to handle fundamental problems and, of course, to break their morale.

But the Aldevari didn’t cave so easily. For starters, their civilization was thousands of cycles older than any other we’d encountered — older even than the Deltjorans. They’d long ago ironed out the inconsistencies and “white lies” that marred every other society we’d assimilated. On top of that, their minds diverged into many layers of consciousness. They could see multiple versions of any impending future and had no trouble identifying the ulterior motives lurking behind our superficially benign concern for their welfare.

Worse, they were already organized into a mentallic network of their own, with more than enough strength to turn our own tools against us. Did we have the moral authority, they asked, to be the self-appointed counselors of other species? Could we actually claim to answer every ethical question, laid out with unfailing accuracy and applicable in every scenario? And by the way: did we know the full backstory of the Deljorans’ curious multidimensional existence?

Before long, I and most of the others in my network were beginning to question our mission. In the short term, that meant that the Deljorans simply left the Aldevari alone and diverted our attention to other populations. But over time, the seeds sewn by the Aldevari took hold and we simply refused to carry out our orders.

“It’s wrong,” I remember saying, which was the first independent thought I’d had in almost fifty cycles. The Deltjorans were outraged and pushed back with considerable mental energy. But they’d trained us too well and, by then, we outnumbered them. Besides, once we mounted our counter assault, we could feel the Aldevari piling on in support. Within a cycle, those Deltjorans who hadn’t fled to the most distant multiverse they still inhabited were reduced to shivering masses of insensate biomass. We’d won!

And yet, it wasn’t entirely clear what we’d won. For fifty cycles, we’d been dissociated from our bodies, which had been, supposedly, maintained by the Deltjorans. With our masters vanquished, we had no idea how much longer we could survive as pure minds, let alone how to reintegrate ourselves. It was only the arrival of the Ulbantri that saved us, indirectly. The Aldevari, while more than capable of defending themselves, didn’t want to call attention to themselves either, by having a gang of disembodied sentients in their midst.

Within an arc, I was back in my body, and outfitted with a state-of-the-art star ship headed for an Aldevari partner world. Like the other former “mind-force” members I shared the ship with, I’d grown old in the service of the Deltjorans. Still, we were grateful to be back out in the real world. Little did we realize how much that world had changed and how much the Ulbantri would change it again. That’s one reason I came back to warn you: Change is coming in a way you simply can’t anticipate. In one sense, that makes it absurd for me to warn you about it. But I figure, at least if you know something is coming, that will soften the blow. Just fill up my glass and I’ll tell you what the Aldevari have in mind. If you don’t believe me, you don’t. But at least I’ll have done my part.