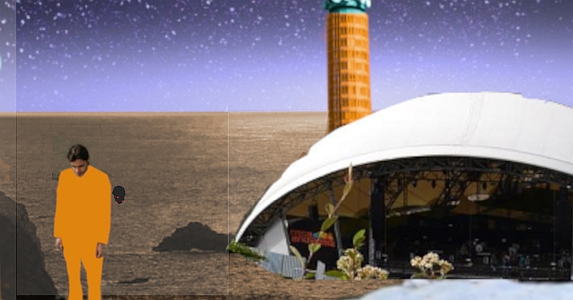 After two tense days, during which Roland struggled to reconcile his affection for Ursula with his mounting suspicions about her motives, he received an unexpected comlink call from his mother, Linda.

That is, the woman claimed to be his mother. Based on what he’d learned from his work at the Ministry of Finance, he figured his mother would never think to call him. The Kaltreen, he knew, had likely told his mother that his prison transport had crashed and killed everyone on board.

And yet the voice asked lovingly after his health and scolded him for “going out of bounds” just as she might have years earlier. Still, the main thrust of her conversation seemed off. Assuming the Kaltreen authorities had contacted his mother, why would they think to mention Ursula, specifically?

“The nice man from the government said you’ve made a lot of progress with your … with your therapy and could be released soon,” she said. “And that’s good. But he also told me you’re running around with the wrong crowd. They’re worried about you — so be careful. Please, Rolo, I want to see you again before I die.”

Rolland didn’t try to defend himself and acted surprised that any of his “prison friends” were under suspicion. As he’d learned the hard way at the Ministry, he dared not reveal information that might incriminate him later. Caught between the soothing voice he heard and its disturbing mix of praise and threats. Roland realized that whether these were his real mother’s own words, or a script delivered by a mimic, he’d have to decide on his own what path to take.

What mattered was that the Kaltreen had linked him with Ursula, who now wanted to enlist him in an attempted prison break. If he didn’t participate in the prison break and it failed, he might still be spared. Considering the fire power contained in Europa Base’s main prison towers Ursula’s odds of success were slim. But if he joined in and the prison break succeeded, he’d be on the run for the rest of his life, dodging Kaltreen patrol ships and shuttling between dark underground bunkers.

Returning home after his last work shift, he was still lost in thought when Ursula greeted him with a broad smile. After teasing him about his dour expression, she drew him close.

“I’m letting you off the hook,” she said. “One of my contacts in the repair sheds will take the images for me. I could see how uncomfortable you were when I described my plan. You’ll miss me, I guess, but at least you wont have to do anything too scary for you.”

Her mocking tone stung hard, but Roland had learned his lesson. Trusting the manipulative ways of his fake father had landed him at Europa Base. He wasn’t about to go down the same path with Ursula.

“Tell me the truth,” he said. “I’m just a variable in your escape plan. Always have been.”

“Then stop this. Now,” said Roland, “before you get us both killed. We’ll be out on good behavior before long, anyway.”

Ursula’s shrieking laugh carved a deep slash in his heart.

“I used to think you were naďve,” she said. “But now I see you’re stupid, too. ‘Good behavior?’ Do you think the Kaltreen stole our homeworld and our colonies so they could build us a fair and equitable society? If you get out alive they’ll fill you full of implants again and send you off to do more of their dirty work. Only this time, it won’t be so glamorous, Mr. Deputy Minister.”

Roland’s mind filled with a thousand wounded retorts, but he kept silent, turned on his heels and stalked out of the bunker.

I’ll sleep on the grounds, he told himself.

But he knew that the Europa’s rickety climate controls would offer him little protection against the cold, hard ground. Besides, he’d be picked up by securitybots and, sooner or later, interrogated. Though he’d fallen out with Ursula, he didn’t want her harmed either. Maybe, he figured, she could get away.

Good for her, he thought. Being a rebel only got my father killed. And the Kaltreen are still here.

He stopped and gazed back twenty meters at his bunker. He turned up the collar on his canvas jacket and headed back.

Maybe someday, he thought, we’ll outsmart the Kaltreen. Best way I know to do that is from the inside.

And as his hand grasped his bunker’s cold steel door handle, his tired mind lit up with the outlines of a plan.