Episode 2: Static on the Line 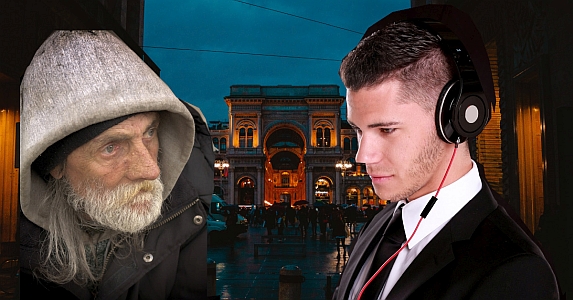 On a cool morning in early autumn, Deputy Minister of Finance Roland Hutchings walked briskly across the town square from his hover pad to an imposing stone, glass and composite office tower. Like most government officials of his grade, he made a point of arriving early. There was no telling when an impatient Kaltreen would pop in unannounced with an urgent request.

The fact that, usually, the urgency sat at an oblique angle either to Roland’s official duties or the needs of the population he served, was irrelevant. What a Kaltreen wanted on a moment-to-moment basis was everyone’s job description. Should his superiors ask why their deadlines were unmet, Rolland needed only mention the reason for the delay and the matter was closed.

The battle of conflicting loyalties could be taxing, even for Enhanced operatives like Roland. Singled out at age nine for this elite program, Rolland occupied a tier of society that entitled him to enviable privileges. Spread out over the first five years of the Enhancement program were a complex array of genetic therapies. By age fourteen, Roland was ready for his first set of cortical implants. Thereafter, each wave of tech implants were accompanied by rigorous training programs that ensured he could use his new hardware to maximum effect.

Regrettably, not every child who entered the Enhancement program fared as well as Rolland, Many succumbed to implant-induced mental illness, which left them unable to distinguish digital input for the action of their flesh and blood senses. Once these delusions set in, there was nothing to do but remove the unfortunate subject from circulation. In answer to nervous questions, the Kaltreen were quick to reassure parents of Enhancement candidates with soothing statistics, which expressed the incidence of “feedback loopage” in fractions of a percent.

The parents of were so relieved, that they enquired no further, never realizing the deception hidden in the statistics. For this “fraction” actually numbered in the millions. It was derived from the two hundred worlds of the Kaltreen Federation. Confined to camps scattered across a remote asteroid belt, these damaged souls lived out their days in sweatshop conditions, cranking out light manufactured goods that were considered beneath the dignity of alpha-class robotics.

For his part, Rolland had survived Enhancement without a glitch though he had no idea how lucky he was. Lucky, that is, for a member of a once-proud species now utterly subjugated to a class of imperious, reptilian invaders.

As it happened on this bright morning, he was spared the intrusion of Kaltreen “privilege.” He was left alone to report on current market trends and track the value of the Kaltra, his masters’ global currency, against competing interstellar currencies.

Yet despite the smooth working of his highly disciplined, quasi-cybernetic mind, he began to lose momentum, shortly after the mid-day meal. His mind filled — as it had twice before in the past seventy-two hours — with a disturbing memory. It was the image of a small child, seated around an improvised campfire in front of a desperately primitive residential structure. Next to the child sat an elderly man.

But why this memory, Roland wondered, out of the thousands he had likely encoded over the past twenty-seven years?

Irrelevant, he told himself,

Most likely, one of his implants was due for a refresh, reboot or replacement. If there was an actual problem, he knew the local branch the Kaltreen Medical Corps would contact him shortly. Until then, this situation was best handled with over-the-counter neurotransmitter stimulants.

Yes, that had to be it, he hold himself and made a note to stop off at the Ministry’s dispensary on his way home. He returned to his workstation, pushed himself to complete his assignments slightly ahead of schedule and, in the absence of late afternoon meetings, was free to leave the Ministry a half hour early.

Now in full control of his faculties, he bypassed the dispensary and walked out to the street, where a light rain was falling. The vibrant city around him was reflected in a wet mosaic on the slate sidewalk at his feet. It was a delicious sensation — that was soon interrupted by a grating, raspy voice in his left ear.

The Deputy Minister of Finance turned his head toward a stooped man in his late fifties, wearing the rough garb of the city’s homeless.

The fear in Rolland’s eyes stemmed not only from surprise, but also from the flash of recognition that accompanied it.