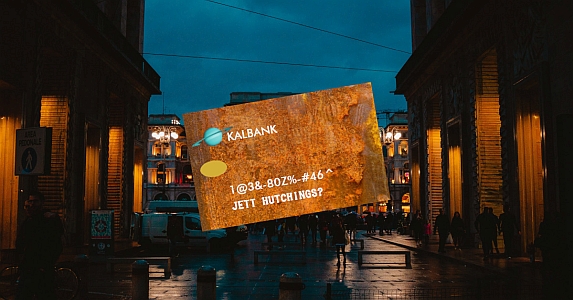 Roland led the scruffy man who claimed to be his father to the lobby of the nearest credit service and called up a holographic keyboard from one of five available credit tile dispensers. He entered the encrypted code assigned to his private personal account, chose a credit amount and seconds later, a rectangular tile in dull gray plastic with no identifying marks, slid out of the dispenser. He retrieved the tile but hesitated a moment to stare in the older man’s eyes. Could this really be Jett, the man that both his mother and Grandfather Peter had told him the Kaltreens had killed in an ambush.

“Tell me,” said Roland. “How did you escape the ambush?”

“Almost didn’t, Son,” he said. “But the Kaltreen forgot how well they trained us. As soon as I saw … saw what they were up to, I blasted the lead assault vehicle and fired on an electrical tower to its right. The Kaltreen were too busy dodging stray high voltage cables to watch all of us. I blasted a manhole cover and slid down into the sewer system. Then I just ran and ran, until I found an access shaft. Must have been half a kilometer away. I blasted that open — and darn near killed myself the way the beam bounced off the metal pipes. But I made it out. Been living in the streets or out in the countryside ever since.”

Did “Jett’s” voice match Roland’s faded memory of the father he hadn’t seen since he was seven? It was hard to tell, but the man’s sincerity was hard to deny, as was the affectionate look in his eyes. Besides, he realized, what homeless person would likely know that his father had been missing all those years? It wasn’t as if Roland were a celebrity with a high-profile bio-vid out on the mass market. He put the newly minted credit tile into the man’s hand.

“Here,” he said. “Get yourself a room in a hostel downtown. Do you have any kind of state ID?”

“I’m registered with a .. with a different name through, you know social services,” said the man. “Hard to believe the Kaltreen care about my social welfare. Probably fattening us up for a meal.”

“It’s not as bad as that,” said Roland. “But if you wanna get cynical, imagine governing an entire population with no access to healthcare and so on. It’s actually cheaper for .. the government … to help you.”

“Whose government?” asked the man. “Not mine.”

Roland glanced at his wristband chronograph.

“I have to prepare for tomorrow’s quarterly finance conference,” he said. “After you find a room, get cleaned up and buy yourself a few sets of dress clothes. I’m in the ministry now. I can’t meet you in public … this way. Then we can talk.”

The man looked down at the sidewalk.

“Not ashamed,” said Roland. “But If I don’t keep up appearances, I can’t help you. I can’t even help myself. There’s enough on the tile for everything you need for six months if you’re careful. The last thing is to get yourself a pay-as-you-go comlink service. Then call me. Here’s the link.”

Roland grabbed a stylus out of his briefcase and scrawled his comlink code on a page from a small notebook that lay next to it. The man who might be Jett put his hand on Roland’s shoulder. “Your mother did a good job with you,” he said. “Now go before the bugs see you with me. And look out for my com.”

Though Roland had wanted to give him a parting shoulder slap, the older man turned and walked away, Roland wondered if the man’s limp lent credence to his story of a harrowing escape through the city’s sewar system.

Even that could be fake, he thought.

Yet “Jett’s” warmth and sincerity had seemed as authentic as anything else in the hybrid human-Kaltreen society of which Roland was an official member. By now the light rain had let up and Roland had the luxury of following his wood-be father with his eyes, until he turned right at the next corner. Had he just been snookered out of several thousand credits, or had he turned the first page of a long missing chapter in his life?