Episode 4: On the Edge 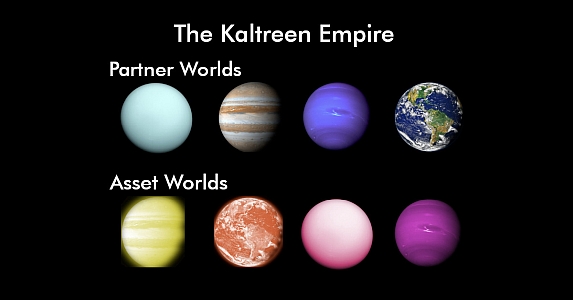 In the days following his encounter with the man who claimed to be his father, the Deputy Finance Minister for the Kaltreen colony planet, formerly known as “Earth,” was caught up in a flurry of hurried meetings, rapid data shuffling and mounting anxiety. The quarterly financial report was due in a matter of days and a lot was riding on it. Unless Roland’s homeworld could meet Kaltreen productivity, standards, it would be downgraded from “Partner World” to “Asset World.” The difference in classification would come with a significant drop in quality of life.

Partner Worlds received the latest technology and the best medical facilities. They were on the Defense Priority list during war time and enjoyed free access to interstellar travel. Best of all, residents were allowed to go about their business with minimal supervision.

Life on Asset Worlds was restricted, impoverished and unhealthy. Damaged infrastructure went untended for years. The Kaltreen reluctance to invest in unproductive worlds made everyday life a scramble for scant resources. Worse, the residents were officially accused of “sabotage” for failing to meet quota. They were hounded by security squads, and their meager wages were often heavily tithed for no apparent reason. Such planets were valued only for their ability to churn out raw materials and food stuffs. Everything else was expendable

The thought that his own mother might be subjected to that kind of treatment made Roland work feverishly. Yet in spite of his diligence, it did seem as if Earth might not make the cut for the first time. Frantic, he whipped his subordinates into a frenzy until, just two days before the submission deadline, a junior accountant discovered a misplaced decimal point in the agricultural report from the region once known as “Europe.”

Though tempted to tear into his staff, Roland dared not call attention to the mistake. Despite his relative youth, he’d already seen what could happen to anyone who stirred up resentment among his staff or his superiors. Rumor, innuendo and outright lies were deadly poison to a successful career. It was only then, when the terrifying prospect of being downgraded was no longer a threat, that Roland had the presence of mind to realize he still hadn’t heard from “Jett,”

Probably got snookered, he thought.

And yet, the man had seemed sincere. Roland laughed at himself for thinking he was immune from the wiles of con men, just because his head was filled with Kaltreen cerebral implants.

No equation for deception? he wondered.

He searched his internal database and found a scholarly article or two that detailed the physiological manifestations of lying. There were precise blood pressure levels, changes in body odor, alterations of speech rhythms and a host of other details that no one could reasonably be expected to detect through casual conversation.

Roland realized he would have to rely on intuition and that there was no denying the impact of this random encounter. Exhausted, he drifted off to sleep until he was awakened two hours later by the chirp of his private comlink. The voice on the other end was unmistakable.

“It’s me, Son,” he said. “I wanted to call when the surveillance teams were between shifts.”

“Surveillance?” asked Roland. “You shouldn’t have worried, In my position…”

“That’s why we have to talk,” said the man. “The training the Kaltreen gave me … well, I know how things really wok. You’ve always been watched.”

“Not now,” said the voice. “I’ll look for you after hours like before. You’ll buy me dinner. I look OK now, so don’t worry.”

The comlink went dead. He rushed to his government-issued tablet and attempted to log in. Relief washed over him. Everything appeared normal. For now, it seemed safe to pursue this mystery further instead of following the law.

For if this man really was Jett Hutchings, he was a fugitive. Sheltering him could get Roland sent to a Kaltreen sweat camp for the rest of his miserable life. His comlink buzzed again and he nearly jumped out of his skin. It was the Chief Finance Minister herself.

“Nice save, Deputy,” she said. “Your diligence will be rewarded, That is, you won’t suffer the fate of life on the Asset Worlds. Neither will I, I’m glad to say. Stop by my office for a chat tomorrow. There’s talk of promoting you, but I need to clear up a little rumor that’s circulating. I’m sure its nothing. Good night.”