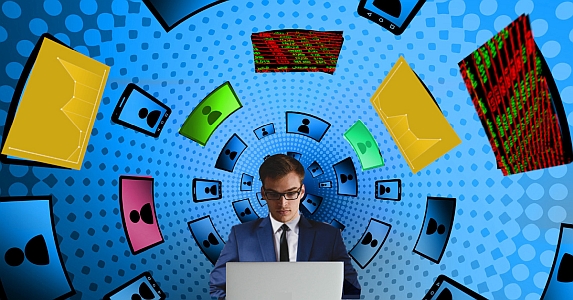 The next morning, Roland was half-way across the broad square that led to the Ministry of Finance, when he stopped dead. From a hundred meters away, the familiar structure looked menacing. Was it the morning fog burning off in the rising sun? Or had his encounter with Jett altered his perceptions?

He stood stock still and gazed up at its imposing towers; the Kaltreen had spared no expense to make them intimidating. But knowing he could linger no more without arousing suspicion, he strode to the entryway and arrived at his workstation on the seventh floor, prepared to address the latest crop of reports from every sector of the planetary economy.

Though his office was unchanged from the previous day, it looked … different. He eyed every object on his neo-wood desk and wondered if it contained a hidden camera. All the same, time was running out. The morning status call was an hour away and he’d be expected to comment about current market trends. But Jett’s promised revelation continued to dominate Roland’s thoughts. For better or worse, his cerebral implants took over. Sensing the impending deadline, they flooded his mind with an irresistible torrent of data.

Soon he was assimilating multiple, complex data streams, and comparing them to their peaks in previous cycles. No sooner was the last column of the last report filled, than the morning status call materialized on his quantum laptop. He dove into a formal presentation that took up most of the meeting. The remainder consisted of with sly questions from his superiors, intent on finding the tiniest flaw in Roland’s reasoning — in vain.

Once the formalities were over, Roland slid back into his chair. He longed to step out of the Ministry for an early lunch at a quiet coffee shop. His comlink had other ideas. Chief Finance Minister Madeline Stapleton’s voice rang out with a strange mix of empathy and menace. Would he be so kind as to stop by her office? A few minutes later, Roland exited the elevator on the twenty-seventh floor where he was met by the Minister’s personal assistant.

Roland nodded, relieved to see it was “business as usual” at the Ministry. Yet from the moment he took a seat in the Minister’s elegant office, he couldn’t shake his mounting dread — which Minister Stapleton’s gracious smile did nothing to soothe.

“Thank you for coming,” she said. “I want to start by saying, I’ve never seen an operative at your level take so much responsibility for the smallest details of every report. Your work is exceptional.”

“Which is why it pains me to think that there are those who would undermine you, by spreading a malicious rumor,” said Stapleton.

To Roland’s confused look, the Minister replied with a rundown of an eyewitness account from earlier in the week. Why had he been seen conversing with a scavenger just off the city square?

“Civil enough,” said the Minister, “to buy him a credit tile, apparently.”

“Yes,” said the Minister. “I can see the sincerity in your eyes. You experienced a moment of genuine compassion. More importantly, the readout from your implants confirms it. Yet a few members of the Executive Council believe there is more to the story. Do you have any idea why?”

Roland did his level best to steady his heart rate and hoped the effort wouldn’t also show up on the Minister’s readout.

Stapleton stared at him, as he forced himself to sit as still as stillness itself.

“You know,” she said. “I’m inclined to believe you. The excellence of your work suggests a degree of dedication to the Empire I’ve never seen before. I see now that some of my colleagues might harbor resentment toward you. But be careful. If I discover my faith in you is misplaced, you will wish you had never left your pathetic life in the provinces.”

Roland nodded and was about to speak when the Minister’s personal assistant stuck her head in the office doorway.

Stapleton’s eyes widened and she waved Roland away, without realizing how grateful he was to escape her piercing gaze. He made his way to the elevator bank where his private comlink buzzed, while Jett’s ID scrolled across its screen. As the elevator door whooshed open, he dared not even send out a discouraging text. When he reached the street, he knew there was only one course open to him.

He just didn’t know which one.