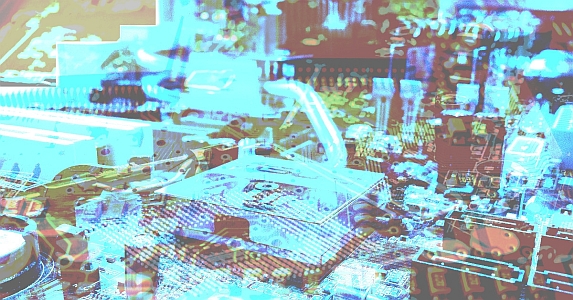 The emotions that Ursula had awakened in Roland filled him with a mysterious joy. Aside from the soothing validation of feeling loved, the novelty of the experience had the fascination of a new toy. For a man so long stunted by brain-washing and mind-controlling implants, it thrilled him to realize that Ursula was “his” and he was “hers.” Fortunately, he had enough common sense to keep such thoughts to himself. Besides, Ursula’s scintillating conversation and passionate nature left next to no time for self-obsessed chatter.

Adding to Ursula’s unique charm was her in-depth knowledge of electronics. In her former life, she told him, she had been a chip designer for the Kaltreen military.

“I asked too many questions about a critical guidance system,” she said. “The Kaltreen accused me of being a spy.”

“Funny how I’m the one repairing used components then,” said Roland. “”I’m not even sure why they want me to bother. All I keep hearing is how obsolete all that equipment is.”

Ursula looked deep into his eyes and stroked his face.

“They want you to think that,” she said. “So you won’t be tempted to start anything.. Chances are, you’re working on some new technology. You know, patching subassemblies together. That’s why they don’t have me doing it. An hour or two in there and I bet I could figure out what their up to. You don’t have a camera do you?”

Roland shook his head and looked at her quizzically. Surely she went through the same strip search he did before leaving his prison transport.

“Well I happen to have one,” said Ursula. “I swiped a miniature digital unit out of a dormant service bot that was due for recycling in Hydroponics. I’m supposed to be tending the cabbage bins. But that takes the brainpower of a gnat, so I get bored and wander around on my breaks. That’s when I pried this little baby loose.”

Roland’s eyebrows shot up at the sight of the shiny red cylinder that Ursula fished out of her bureau drawer.

“I play dumb, and they think I’m harmless,” she said. “You know, too stupid to cause any trouble.”

Roland sighed. He wanted to believe her. Anything to keep this dreamy love affair going, but there was something he had to know.

“So let’s say I did manage to create a few image files,” he said. “What do you have in mind?”

Ursula pulled him close and whispered in his ear.

“Sabotage, of course,” she said. “Don’t you ever want to break out of here?”

Roland shuddered. twenty-five years earlier, His father Jett, his real father, had been seduced into rebellion and walked into a trap. Was he about to make the same mistake?

“The security cameras are on all the time,” he said. “If I start taking pictures, they’ll arrest me on the spot. I’m not ready to go back to communal showers — or worse.”

“Is that what’s worrying you?” said Ursula. “The security system in this base is so primitive, I can easily knock it out. Just give me enough lead time before our next shift.”

“Leave that to me,” said Ursula. “I have connections all over this base. Or maybe you like it here. Just know I won’t be here much longer, no matter what.”

With that, Ursula kissed him in that irresistible way she had. Roland felt caution, logic and common sense fall out of his mind. How long, he wondered, before he was stretched out on a torture rack in some dark basement? At the moment, he wasn’t at all sure he cared.