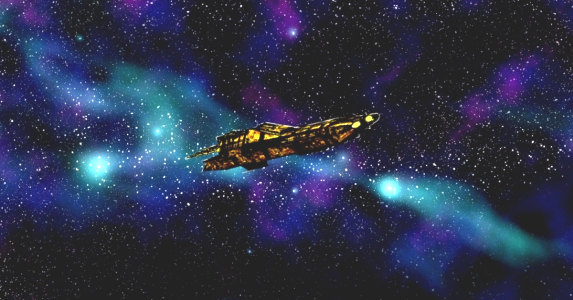 As usual, by the time Zevdra settled into the Captain’s chair, the launch codes still weren’t loaded into the nav console. But the real problem was Company Policy. Though Zevdra knew those codes by heart, only the Navigator was authorized to enter them.

“Except in an emergency,” Zevdra muttered. “Craters, where’s a crisis when you need one?” The sound of zero-G boots, clomping up the steel, spiral stairs to her right made the question moot.

“Captain!” said a lanky, dark-blue thirty-something male. “What a beautiful day for a launch.”

“Enter the codes, will ya, Bleenor?” said Zevdra. “We’re way behind schedule.”

Aye, aye,” said Bleenor. Of course, he knew how much Zevdra hated all nautical talk. Especially, that is, the drivel he’d picked up from the humans.

Zevdra clacked her mandibles. Sure, the humans had helped the Veratrese upgrade their space technology. Was that any reason to imitate those ugly globs of fat? But never mind, the thrusters were now online.

“Small favors,” she whispered. With a nonchalance earned during ten years of daily practice, she edged her cargo scow free of its hangar stays and out into inky space.

“What the rotating pulsar is this?” she asked. “That’s way offģ.”

“A slight detour,” said Bleenor. “You keep saying how much you want to see the ruins at Serlat 3. We can easily stop off there for a couple of days and still make deadline.”

“How?” asked Zevdra? “The only official space lane is ģ oh no.”

“Oh, yes,” said her navigator. “Come on, it’s nothing. I have a complete set of Grelnez star charts.

“An illegal set,” said Zevdra. “There’s a reason for that. If we get caught taking a shortcut across Grelnez sovereign space.ģō

“Not across,” said Bleenor. “We’ll barely skirt the edges, and shave exactly two days off the rest of the trip.”

“I could throw you in the brig for this,” said Zevdra.

“Except we don’t have one,” said Bleenor. “But you could spank me.”

“Craters, Bleen,” said Zevdra. “Serlat 3. If you’d pulled this stunt with any other location I’d be furious. Do you think they’d let us up to the top of the Altresnar towers?”

“Well, forget it, we aren’t going there, anymore,” said Bleenor, “After the way you squawked, I switched us back to Mission Trajectory.”

The dark-blue navigator laughed until his thorax shook.

“Is that the sound,” he said, “of my Captain ordering a course change?”

“Yes,” she said. “But if the Grelnez catch us, I hope they throw you into a pit with a dozen wild ferlandra dogs.”

“Grisly,” said Bleenor. “I’m seeing a whole new side of you.”

“Nonsense,” said Zevdra. “I only have one side.”

“Right,” said Bleenor. “And a ferlandra dog has only one tooth.”

Zevdra ignored him and called up her link to Sideranet.

“Serlat 3,” she said softly. Soon the entire command center was flooded with a one-twenty-fifth holo-rendering of the ancient site.

“Wow,” said Bleenor. “It’s as spectacular as they say.”

“Yeah,” said Zevdra. “A day on the temple grounds can change your destiny, is what I’ve heard.”

“You mean, like, if one of those ancient titanium struts falls on your head?” asked her navigator.

Usually, sparring with Bleenor had a salutary effect on Zevdra, for reasons she didn’t understand. It wasn’t like he meant anything to her. They were just crew mates on a lucrative freight run: Back and forth between Earth and Proxima Centauri every quarter for ten cycles. That was it, she told herself. Then why, she wondered, did his stupid attitude rattle her gaster so much?

“The only thing liable to fall on my head is a writ from Sector Court,” she said, “when they find out about your ģ Hey what’s that?”

Bleenor’s mandibles gaped as he gazed at the main view screen. He quickly checked the nav console.

“Quarks in a box,” he said. “The AI calls it a temporal vortex.”

“A what, now?” asked Zevdra. Not for the first time, she regretted her company’s barebones budgeting. It was just the two of them, plus the AI and four servicebots to handle the repair work. Right about now, a Science Office would have come in handy

“That swirly thing out there?” asked Bleenor. “The AI says it’s a rare section of the cosmos where space and time are out of phase.”

“Oh that’s so much clearer,” said Zevdra. “What does it mean in a life and death kind of way?”

The two insectoids felt a wrenching sensation in their abdomens and everything went black. Moments later, Zevdra’s stifled voice sounded from the floor of the command center.

“I’m fine,” said her navigator-and-nothing-more. “We should probably stand up and assess the situation.”

“How about we just lie here forever,” said Zevdra.

In spite of herself, the captain staggered up onto her four back legs and stared into the main view screen.

“Hull integrity,” she croaked at the ship’s AI.

“Captain, take a look at the screen,” said Bleenor.

Zevdra turned her groggy head toward the screen and tried to take in the confusing image that reached her compound eyes.

“You’re kidding,” she said. She looked over at Bleenor, who shrugged but, for once, was speechless — and no wonder. Not a quarter of an AU ahead of them, was a cargo scow identical to theirs in every particular, with one exception: It looked as if it had been singed by either weapons-fire or a rogue solar flare.

“It is registered,” said the AI, “to the Trans Proxima Shipping Company under the name Shiny Nova.”