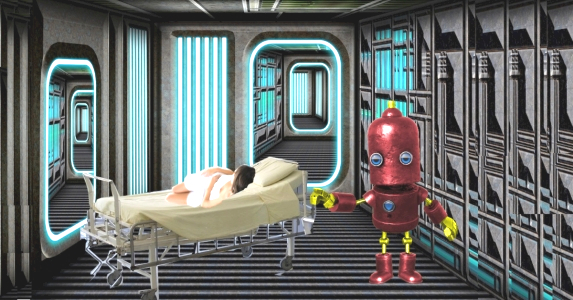 The startled silence that filled the bridge was broken by a staticky comlink transmission.

“What’s she doing on one of our ships,” asked Bleenor.

“She’s running out of air, is what matters,” said Zevdra.

“We could send a servicebot,” said Bleenor.

Zevdra nodded at what sounded like a safe approach, keeping in mind that the safest thing of all was to pull away and leave the wayward vessel to its fate./p>

“Not sure where we can pull away to,” said Bleenor. “I doubt we’re in the same universe as we were this morning.”

“A parallel universe,” asked Zevdra. “I thought that only existed in holovids.”

“Not funny,” said Zevdra. “I could write you up for that. Besides, we have a decision to make.”

“Right,” he said. “Sorry, Captain. I suggest we send two servicebots. One to check for repairs and the other equipped with the med-tech subroutine.”

Zevdra nodded and Bleenor clomped down the spiral stairs leading to the ship’s second level, where the servicebots were housed. One level further down was the ship’s cargo bay — filled with a three-months’ supply of oxygen and rations for one of their homeworld’s starter colonies.

Bleenor paused on the stairs. If they didn’t get back on course soon, a couple thousand Veratrese would suffocate long before they starved to death.

“Live in the moment,” he muttered. Maybe the owner of the voice on the comlink could account for the vortex they’d just fallen through. He rushed over to the first servicebot and tried to steady his nerves. Even after ten years, the servicebots still gave him the creeps. For starters, they’d been built by the humans and were revoltingly bipedal. But they also seemed too self-aware to be … servants.

Bleenor ignored her. The first servicebot was coming online and he had to enter the appropriate system codes into its chest-mounted console.

“That tickles,” it said.

“Dial it down, OK,” said Bleenor. “We have a rescue mission for you and Two.”

“I recommend you install the med-tech subroutine in Two,” said the servicebot. “He’s always wanted to be a doctor.”

Despite reciting a popular calming mantra, Bleenor still wanted to strangle the programmer responsible for the robot’s inane banter. Nevertheless, he took Bot One’s comment to mean that Bot Two was better configured to process the med-tech subroutine.

“Bot Two online,” it said. “Where is the medical emergency,”

Bleenor entered the coordinates of the damaged ship and the coded parameters for a standard rescue mission. Standard, he reminded himself, in the universe he used to call home. The rescue parameters empowered the two servicebots to clamber into one of the Shiny Nova’s two landers and zoom out toward the unknown ship.

“Servicebots dispatched, Captain,” said Bleenor into his comlink and clanked back up to the bridge. As he rounded the last step of the spiral staircase, he encountered another of Zevdra’s holographic projections. But this time, he saw a landscape full of rubble, in which the outlines of an ancient city were barely visible.

“Thought I’d check,” said Zevdra. “You know, to see what else was different here.”

“Can’t believe they’d let this happen,” she said. “It’s a symbol of peace.”

“To us,” said Bleenor. “Whoever did this had other priorities.”

“Maybe we should go there,” said Zevdra, “and try to figure out….”

“Bad idea,” said Bleenor. “Whatever Serlat 3 is to these people, it’s off limits. Why don’t we see what our human buddies out there know first,”

They didn’t have to wait long, before Bot One piped up with a status report.

“Captain,” it said, “we have two humans here. One dead, and another who might live if we can get her over to our ship. The medical bay on this vessel is charred.”

“You think we’re set up for humans,” asked Bleenor.

“Permission granted.,” said Zevdra. “The sooner we get the survivor talking, the better.”

“I’ll tell Two not to sedate her so fast” said Bot One. “Never saw anybody so eager to give an injection.”

The patient, a human female in her late thirties, looked up at Zevdra and Bleenor through a pair of swollen eyelids.

“Shush,” said Zevdra. “Please, can you tell us about the Vortex we just passed through.”

The human raised a feeble hand to her forehead.

“Oh … that’s what happened,” she said. “You must’ve come in when we were on our way out. Only we got there too late. The vortex flared up and burned the heck out of our ship.”

“You knew about the vortex,” asked Bleenor.

“You didn’t,” asked the woman. “Well that tears it. There’s a … soft spot … in space-time right around here. It was our one chance to escape. My only consolation is that now you’re stuck here, too.”

“You bugs know nothing,” the woman yelled. “The vortex opens once every thousand cycles. Now I’ll never be free.”

“Free of what,” asked Zevdra.

But the woman’s energy faded and she fell into a deep sleep. Bot Two moved in fast.

“Everybody out,” it said. “I curse the programming that made me delay her treatment, so you could ask her the obvious.”

“When we found her,” said Bot One, “the human was moaning about the Alornoz,”