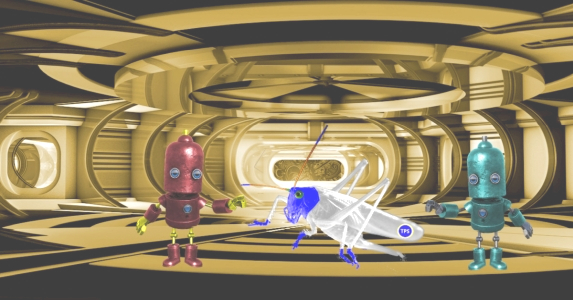 “Different universe, Captain,” said Bleenor. “We’re lucky there are at least a few parallels. Otherwise, we’d have no way to get oriented.”

“The parallels,” said Bot Two, “might end up being more confusing than helpful. I suggest you take nothing for granted.”

“Just like you to advocate for caution,” said Bot One. “I say we piece together as much as we can from the similarities.”

“Cautious optimism, then,” said Bleenor. “Business as usual. What’s different is this parasite. Too bad our only source of info is in a coma.”

“She is merely sedated,” said Bot Two. “But her recovery will be severely compromised if you do not let her sleep.”

“See?” said Bot One. “Pessimism. I’m going to assume that this parallel universe might also have a parallel newsnet system.”

With that, the servicebot appeared to go dead until, a moment later, its status lights began flickering in a series of short, slow pulses.

“Give it a chance,” said Bleenor. “You have somewhere to go just now?”

Fortunately, Bot One sprung back to life the next second - before Bleenor’s mounting frustration made him say things he’d regret later.

“Sorry,” said the servicebot. “I had to run the entire decryption gamut to find the correct access codes. Turns out they’re a simple variant of ours.”

“The Alornoz,” said Bot One, “is a symbiotic species with a talent for total mentallic control.”

“Reads and writes, I’m afraid,” said Bot One. “According to the newsnets, a recent victim was snared at a beach resort, while trying to save a drowning child. But the child was a mental illusion, created by a symbiote that had jumped into the ocean a moment before. The victim no sooner reached out to the illusion than the symbiote leaped onto his neck.”

“Now the victim lives and breathes for the symbiote,” said Bot One. “That’s how they’ve spread from world to world over the last fifty cycles. The victim was last seen stepping into a space freighter for a distant star system.”

“Didn’t anyone try to stop him?” asked Bleenor.

As the servicebot explained, the victim showed no outward sign of infestation. Nothing was suspected until his family reported him missing and investigators discovered his credit account had been transferred to a sector of space-time lightyears away from his homeworld.

“Can’t blame these humans for wanting to escape,” said Zevdra. “So I guess it’s too much to hope that the ... the Alornoz only preys on humans.”

“Any sentient species is vulnerable,” said Bot One.

“How widespread is this phenomenon?” asked Bot Two. “It seems unlikely that any species could have infiltrated the entire cosmos.”

“Good point, Two,” said its android companion. “Verifying ... Yes! We need only travel 1000 parsecs in any direction to reach a sector of space-time where....”

“Only a thousand?” he asked. “The Shiny Nova isn’t built for long-range flight. More than ten parsecs and we’d have to overhaul the spacefolders.”

“Don’t they have space stations in this universe?” asked Zevdra.

“Probably,” said Bleenor. “And a credit system too! Do you have seventy-five thousand credits lying around for engine work?”

“Stop calling me that!” his Captain shouted. “I’m still your superior officer.”

Bleenor stared at her a moment, his heart racing. Why, he wondered, did his body suddenly feel like it was made entirely of lead? His quiet voice trembled ever so slightly.

“Awaiting orders, Captain,” he said and raced down the spiral stairs leading to the lower decks.

“What’s wrong with him?” whispered Zevdra. “Moons of Helnor-Devanne, Two, do you think the parasite’s got him?”

“It is not my place to speculate,” said the servicebot.

“His condition,” said Bot Two, “is consistent with deep emotional attachment, aggravated by embarrassment, and grief.”

“Grief?” asked Zevdra. “I had no idea. He didn’t mention a death in the family.”

“Captain,” said Bot One, “please. Asking Two and me to speculate about utterly illogical organic emotional responses puts too much strain on our central processors. I will ... try ... to assist you by asking what I believe to be a relevant question.”

“Is it possible,” asked Bot One, “that Navigator Bleenor ... loves you?”