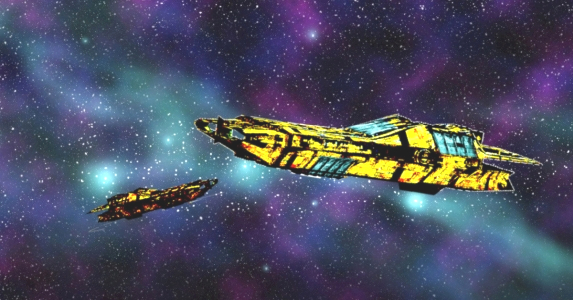 Zevdra felt as if her head were exploding. She couldn’t decide what was worse: The truth about Bleenor’s crush on her — or the fact that she’d learned about it from a servicebot.

“Out!” she snapped at Bot One and Bot Two — the latter only too eager to return to its patient.

Zevdra slumped into her captain’s chair. The signs, she decided, had been visible for months. All those goofy comments, and the familiar tone he kept trying to get away with: Why hadn’t she seen it before? The answer was easy. Zevdra had been too focused on her career to give romance a thought. Besides, lanky, awkward Bleenor wasn’t her type. Why then, she wondered, had Bot One’s question thrown her into such a sulk? For better or worse, her brooding was interrupted by the ship’s AI.

“Unidentified ship approaching,” it said over the intercom. Zevdra patched in Bleenor and the servicebots.

“Bot One,” she said. “Is that ship real or a mental illusion?”

At least, Zevdra decided, he sounded strong again. But the implications were terrifying. She could no longer tell reality from telepathy.

“Plot us a course as far away as possible,” she said.

In a flash, Zevdra entered the required nav codes and engaged the engines. The Shiny Nova responded with a brief lurch forward and came to a halt. Soon Bleenor’s gravity boots could be heard clomping up the spiral staircase from below decks.

“What happened?” he asked.

Bleenor leapt to the command console, punched in the nav codes he’d just transmitted, and engaged the engines. The ship bolted forward at top speed.

“You realize that’s a violation of protocol,” said Zevdra.

“Not when the Captain’s incapacitated,” said Bleenor.

“Hey, Guys?” asked Bot One from the next bulkhead. “Why are we docking with that unknown ship?”

The two insectoids stared at each other. Apparently, the Alornoz had pulled a “double fake” on their overwrought minds. Instead of zooming away, they were about to be boarded.

“Bot Two,” shouted Bleenor, “wake your patient and find out if there’s any defense against these things.”

“No need,” said Bot Two. “My research shows that the only defense against the parasites is a strong emotional bond to another sentient being in close proximity.”

Bleenor stared at the floor.

But Cap … Captain,” said her navigator. “What if this is a mental trick by the Alornoz?”

His thorax trembled as Zevdra leapt forward and entwined her antennae with his.

“Only one way to find out,” she whispered.

For Bleenor, the sensation, so often longed for, was almost unbearable. Did Zevdra … actually … but the next second, the question simply didn’t matter. There was nothing in the universe except this beautiful….

“The unidentified ship is disengaging and veering off, Captain,” the ship’s AI said over the intercom.

Slow to respond, the two Veratrese eventually disentangled themselves.

“Maybe,” said Bleenor, “we can head for a deep space station and offer our services in exchange for a ship upgrade.”

A low human chuckle on the spiral staircase made two insectoid heads nearly snap off as they turned to look. There, one hand on the titanium railing, was the human female they’d rescued several hours before.

“Congratulations,” she said, “You’ve lasted longer than most. But you failed to see past our initial deception. A ‘parallel’ copy of your ship? There’s no such thing. We launched an escape pod and made it appear to you like a copy. We’ve had you in our grasp this whole time.”

“They were the easiest to influence,” said the parasite-controlled human. “Their minds are so … orderly. But the best part was the last bit. We got the female to violate a steep social taboo with hardly any effort.”

Zevdra leapt on the human and pinned her to the floor of the command center.

“Control this,” she said. No one was more surprised than she, when her front left arm lashed out and knocked the smaller being unconscious.

“Bleenor,” she yelled, “plot a course, engage engines and help me drag this monster into the airlock.”

“We can’t do that, Captain.” said Bleenor. “We’d kill the human host.”

“Get moving,” said Zevdra. “Two, keep this human sedated until we come up with a plan.”

“Yes Captain,” said Bot Two. “But a human can be sedated for only so long before….”

“Doesn’t anybody on this ship want to survive?” asked Zevdra. “Captain’s orders. Go!”

The two servicebots took charge of the human. Bleenor, antennae drooping, set the Shiny Nova on a trajectory at an oblique angle to their current location.

“Won’t they just come after us?” he asked.

“It’s better than sitting still,” said Zevdra. “Ask me, I’d rather dive into the nearest star than let one of those things get me. Besides, our new hostage ought to buy us some wiggle room.”

Let’s hope,” said Bleenor. “AI, does this parasite have a weakness?”

“As Bot Two told you, the presence of non-rational mental activity renders the parasite dysfunctional.” said the AI. “When you and the Captain … embraced … the human exhibited a steep drop-off in cognitive function.”

“No way we can keep that up,” said Zevdra.

“We don’t have to,” said Bleenor. “Flying into the nearest star is as irrational as it gets.”

“Except, we won’t always have a star close by,” said Zevdra. “And didn’t the human just say that she planted that emotional bonding thing in the robots’ heads?”

“Well their ship did veer off,” said Bleenor, “after we … you know.”

“Craters, it was just a kiss,” said Zevdra. “Wasn’t it? Don’t answer that. And we don’t even know if there was actually a second ship, either. So I say we stop playing this game. AI, what are the odds of finding another vortex that leads out of here?”

“Accurate assessment of probability on that scale is impossible with available methods,” said the AI. “I can, however, begin a broad-spectrum search pattern.”

Just then, Bot One walked into the command center.

“The human is sedated,” it said. “By the way, the humans have an expression for your attempt to find a second vortex. They’d say it was like looking for a needle in a haystack.”

“No idea what that means,” said Zevdra.

“I can explain, Captain,” said Bleenor.